Student agitations at Presidency and JU shock her, while CU makes her feel at home 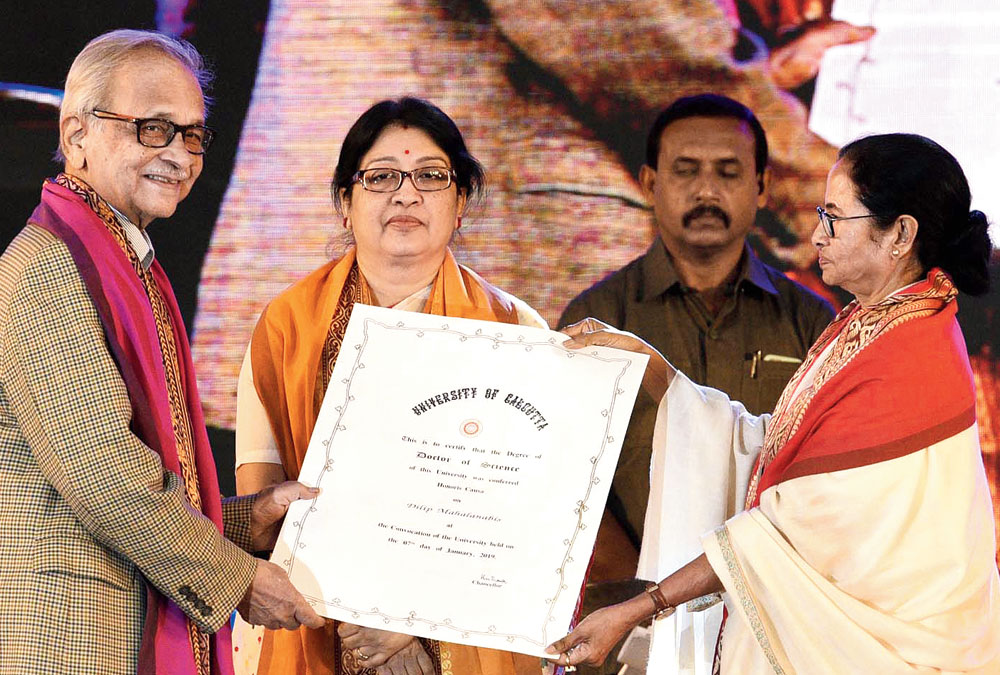 Mamata Banerjee on Monday praised Calcutta University for respecting “old values” and said it was “unfortunate” that “big” and “renowned” Jadavpur and Presidency universities were not following this tradition.

“Calcutta University is an institution that never differentiates between the rich and the poor. They will never see which family you belong to; whether your parents are educated or not; where you come from. They (Calcutta University) do not claim to be elite. Yet, they have produced great scholars over the years,” the chief minister said while delivering the convocation address at Calcutta University.

“It saddens me that the situation at some big, renowned universities, Presidency and Jadavpur, is not the same…. And I am sure the honourable governor (Keshari Nath Tripathi and Parthada (education minister Partha Chatterjee) will agree.”

The governor, who is chancellor of all three universities the chief minister referred to in her speech, and Chatterjee were on the dais.

Mamata said she felt the “warmth of being at home” whenever she visited CU and was “shocked” that Presidency had to consider holding its convocation at Raj Bhavan.

An agitation by students demanding the reopening of Eden Hindu Hostel, which dragged for months, and fears of disruption had forced the Presidency authorities to hold its convocation away from the campus.

The programme was finally held at Nandan III.

“When I heard Presidency University was thinking of organising the convocation at Raj Bhavan, not even in a hall, I was shocked. Why should it be like that? I can’t think of something like this,” she said.

“I know most teachers, students, scholars and non-teaching employees of these universities (Jadavpur and Presidency) are good. It is unfortunate that only a small section of people in these institutions do not respect values. That is unfortunate.”

The chief minister referred to the 2014 convocation at JU where a number of students had got up on the dais but refused to take their certificates from chancellor Tripathi. “The honorable chancellor had gone to Jadavpur University. And they didn’t take the certificates from him. Why should it happen?”

The students were protesting police action on the campus and demanding the resignation of then vice-chancellor Abhijit Chakrabarty.

Mamata said she was not against politics. “But let me remind you no political ideology tells you to disrespect others. Every student has the right to participate in the convocation and get rewarded for the efforts they have put in. Why should others object against candidates who want to participate in a convocation?” she said.

Presidency held its sixth convocation at Nandan III with a curtailed guest list, from which the chancellor dropped out. Around 700 degree recipients were barred from the event because of students’ agitation.

Reacting to Mamata’s comment on JU, Kesav Bhattacharya, a professor at the university, said academic rankings would tell how the institution was faring.

“We don’t want to be compared with any other university. Everyone one is good.

It is not expected, and nor can it happen, that only one university in a state will improve and not the others,” said Bhattacharya, general secretary of the CPM-backed West Bengal College and University Teachers Association (WBCUTA).

“It is incorrect to say JU has an elitist attitude. There is an open-mindedness at JU. Here people mix freely and that is our strength.”

A professor at Presidency University said the institution had produced some of the best scholars because of its elitist character.

“Elitism is cultivation of excellence,” he said.

The professor referred to what Amartya Sen had said on the campus in 2016 — the Nobel laureate didn’t think there was anything to be apologetic about being an elitist college.