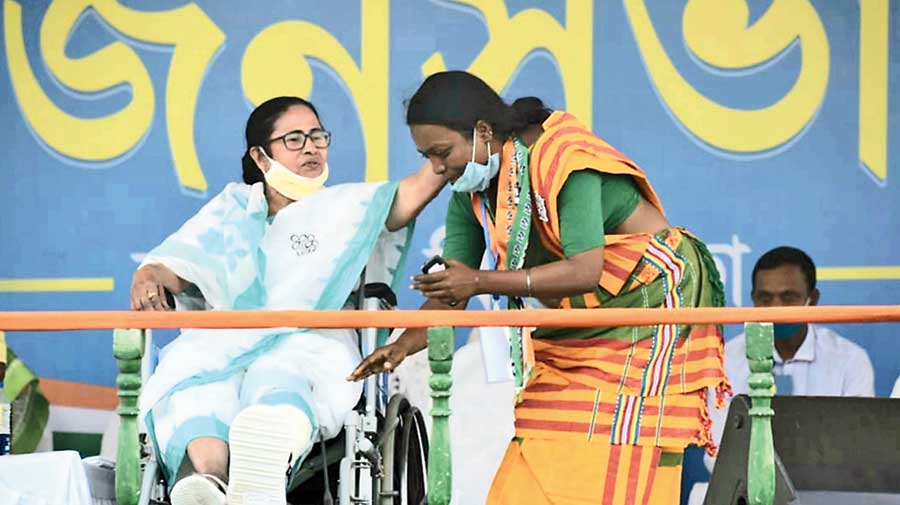 Mamata Banerjee on Wednesday accused Narendra Modi of not allowing the state government to buy Covid-19 vaccines for all people in Bengal even though she had written to the Prime Minister on the issue a month back.

Mamata made the charge on a day Modi addressed a virtual meeting, which was attended by several chief ministers and senior government functionaries, in the wake of rising number of Covid cases in a few states.

The Bengal chief minister, however, skipped the meeting and was represented by the chief secretary as she was busy campaigning at Gopiballabhpur and Lalgarh in Jhargram, one of the four Jungle Mahal districts where her party had fared very badly in the last Lok Sabha polls.

“I have sent a letter to Narendra Modi a month ago, asking him to send Covid vaccines for all and saying our state government would buy those. We have no way to get the vaccines as the same are not available in the open market. I requested them to allow us to buy Covid vaccines for all but he rejected our plea,” the chief minister told her rally in Lalgarh.

Trinamul leaders said by referring to the Prime Minister’s refusal to allow the state to  buy vaccines for all in Bengal, Mamata had tried to send a message that BJP leaders were not concerned about the health of the people. She made the comment a day ahead of Modi’s scheduled rally in Purulia, which is 95km away from Lalgarh where Mamata addressed her second rally on Wednesday.

Mamata also referred to Modi’s campaign during the Bihar Assembly polls and reminded the people that BJP leaders had never kept promises made during election campaigns.

“Keep in your mind that they are liars. He (Modi) went to Bihar just before the polls and promised that he would provide free Covid vaccines to all residents of the state after the election. But people in Bihar are yet to get the free vaccines... Remember they never do what they promise and they do what they did not say. They are like oppressive kings and outrageous zamindars who are snatching the rights of farmers, women and Dalits,” Mamata said.

Sources said the BJP had fielded a dozen of senior party leaders starting from Modi to Uttar Pradesh chief minister Yogi Adityanath to launch attacks on Mamata on various issues with a set of assurances for all.

“The people of the Jungle Mahal were convinced by different assurances of BJP leaders, including the Prime Minister. Didi tried to send a message to us not to trust them as they will make a lot of promises. Addressing the rally at the Brigade Parade Grounds in Calcutta, the Prime Minister had spoken about a plan to develop Bengal. She asked the people not to believe what the PM says in the run up to the polls,” said a senior Trinamul leader in Jhargram.

“It’s natural that the BJP will release its manifesto soon. The BJP will try to lure the people with attractive projects but our leader has asked us not to trust the saffron camp,” he added.

Mamata also asked the people to recall her role to combat the pandemic and accused the BJP of not doing anything for the people of Bengal.

“You ask the BJP where they were when Didi was drawing circles on roads and helping us during the pandemic. Now he (Modi) has come like a doctor to alert us,” said Mamata referring to the Prime Minister’s advice to the chief ministers during the virtual meeting.

Superintendent of police (Howrah Rural) Soumya Roy has been transferred by the Election Commission, citing his wife Lovely Moitra’s candidature from Sonarpur (South) Assembly constituency on behalf of the Trinamul Congress.

The commission has said the transfer was based on general principle that close relatives of active public representatives may not be assigned such duties during the polls.

Roy has been replaced with 2011-batch officer Shrihari Pandey.