Roadshow by Modi on poll day is bad: Bengal CM 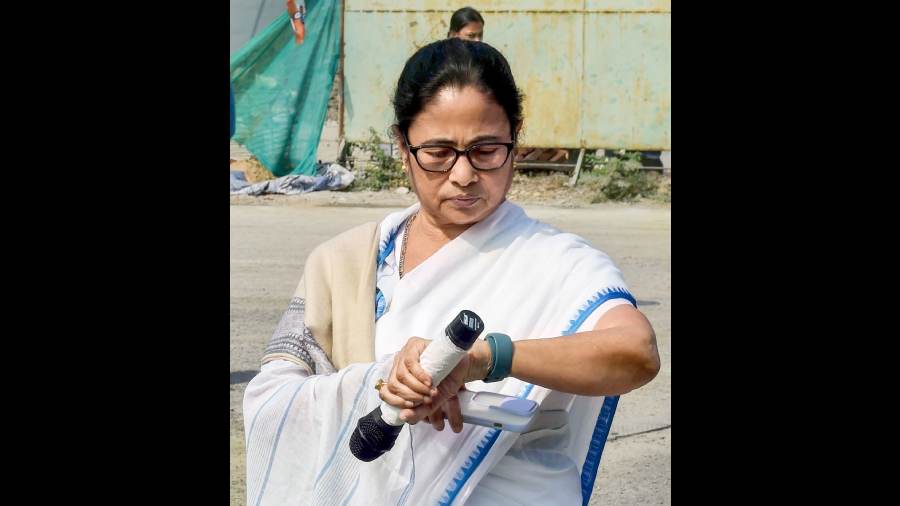 Mamata Banerjee on Monday took a swipe at Narendra Modi’s roadshow, a long walk by the Prime Minister to a polling booth to cast his vote in Ahmedabad, and raised questions on the role of the Election Commission of India, which, according to her, excused a section of “special people”.

“They (Modi) are special people. It is the Election Commission’s duty (to look into Modi’s roadshow). As political parties, we all abide by the EC,” the Bengal chief minister said at the Calcutta airport, before leaving for New Delhi to attend the preparatory all-party meeting for the G20 summit, convened by the Prime Minister.

T he Prime Minister walked to the polling booth — a 2.5hour journey with hundreds of people on both sides waving at him — in the second and the last phase of the Gujarat Assembly polls.

As EC norms stipulate a halt to all forms of campaigning, publicity and political activities 48 hours before voting ends, any violation of the rule invites legal action, an EC source said.

Although Mamata didn’t directly demand any action against the Prime Minister for his alleged violation of the model code of conduct, it was apparent that she felt that the EC would not take note of the PM’s road show.

“I agree 100 per cent with what the Supreme Court said recently.... There should be a system to nominate election commissioners.... Election day road show is bad. But for them, there would be some excuse. It is the basic difference (with us),” she added.

Not just Mamata, most Opposition parties, including the Congress, questioned the EC’s silence on Modi’s poll-day road show, which they branded as a violation of the model code of conduct as he was apparently trying to influence the voters while the polling was on.

Several video footage on social media showed that the Prime Minister came out of his car and started walking slowly with folded hands greeting hundreds of people, who were waving BJP flags and chanting his name.

Responding to queries about the BJP’s claim of a clean sweep in the Gujarat polls, Mamata said the party could expect such a result if the Prime Minister was allowed to hold a road show on the poll day.

“If the Prime Minister goes and holds a rally on election day, what do you expect? They (BJP) may get 100 out of 100. But is it fair?” Mamata asked before leaving on a three-day trip to Delhi, Ajmer and Pushkar.

In Delhi, she is scheduled to meet  Trinamul MPs on Wednesday to discuss the party’s strategy in the forthcoming winter session of the Lok Sabha.

A source in the BJP admitted that the road show on Monday showed Modi’s desperation to cross the party’s tally of 112 in the current Assembly.

“The entire country is watching... So, the outcome is crucial as anything less will give the Opposition, including the Trinamul, to claim the failure of Modi’s magic in Gujarat,” said a source.

Mamata on Monday criticised the Centre for using lotus — the symbol of the BJP — in the G20 logo and claimed that this was not the first time such a thing had happened.

“They had used this earlier. When we speak about our country, we keep mum because it will send a wrong message to the rest of the world. Lotus is our national flower but the Election Commission has allowed a political party to use it as their symbol. Earlier, the tiger was our national animal and later, it was changed to the lion. As it is a subject of the country’s pride, I will not make it an issue. Others may do it but it is certainly an issue,” said Mamata.