The Opposition projected employment figures, besides accusing her government of not doing enough for development of large-scale industries in Bengal 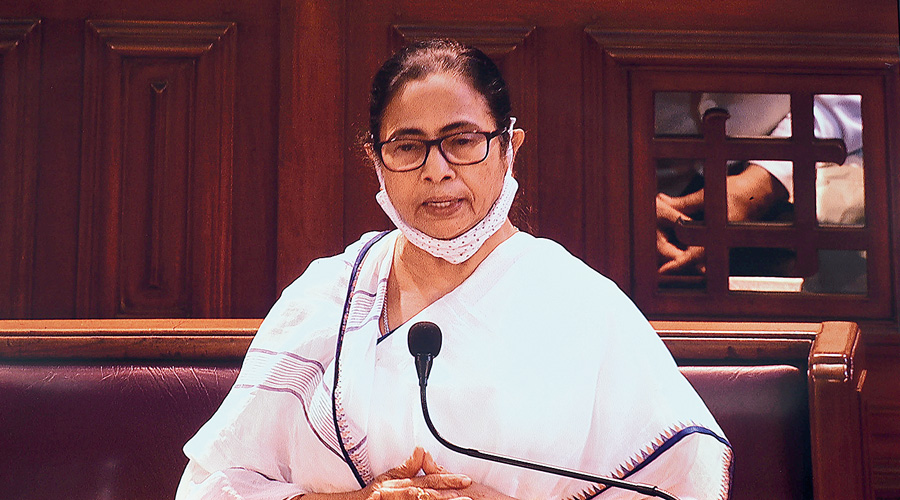 On February 25, 2011, Mamata Banerjee presented her last budget as the railway minister — that was largely billed as a Bengal budget — with the hope of unseating the Left Front government in the Assembly polls scheduled to be held in another two months.

Ten years later, she rose on Friday afternoon to present a vote-on-account — filling in for ailing Bengal finance minister Amit Mitra after obtaining permission from governor Jagdeep Dhankhar — barely two months before another Assembly election, but this time with the hope of remaining in the seat of power of Bengal.

Like what she had done as railway minister by not raising passenger fares, the Rs 2,99,688-crore vote-on-account she read out on Friday didn’t include any proposal to raise taxes.

“Today, I shall speak about hope and not about despair,” said Mamata, defining the theme of the vote-on-account.

The statement of intent that Mamata laid before the House, which the Opposition parties had boycotted, had elements of a Trinamul poll manifesto, expected anytime after the Nirvachan Sadan announces the election dates, as the focus was on pension scheme for all, job creation, welfare schemes for the weaker sections, promise of industrialisation and creation of infrastructure.

Expansion of educational opportunities for religious and linguistic minorities was a special feature in the vote-on-account as she announced 100 new English medium schools for SC, ST communities, besides promising to set up schools in Alchiki, Nepali, Hindi, Urdu, Kamtapuri, Kurmali, Sadri and Rajbanshi languages across the state.

The proposals indicated a 20 per cent hike in outlays for education, sports, art and culture. The most-talked about claim in the vote-on-account, however, was about the Trinamul government’s performance and plans in creating employment opportunities in the state.

“With the planned development of huge industrial centres and infrastructure, we will be able to create 1.5 crore new employment opportunities in the next 5 years at the government, semi-government and non-government levels and through self employment,” said the chief minister, who also claimed that her government had created 1.12 crore jobs in the last 10 years.

The promise of creation of job opportunities — with special emphasis on filling up 50,000 posts lying vacant in the government and over 60,000 posts in the police set-up — was clearly an attempt to woo the voters at a time the BJP has started attacking her government on the issue of employment.

Sources close to her said the recent Bihar elections, where employment became a key issue, was another reason why she had instructed Mitra, who had drafted the proposals, to punctuate the vote-on-account documents with job promises.

The Opposition questioned the past and projected employment figures, besides accusing her government of not doing enough for development of large-scale industries in Bengal. Several BJP leaders said the theme of their campaign would be lack of employment — and irregularities in recruitment in government and government-aided schools — would be the mainstay of their campaign.

“We have created jobs, we have made huge capital investments in the state and also improved the state’s fiscal health,” said Mitra, in a post-vote-on-account news conference that he held virtually.

Unlike other budget speeches, where macro-economic situation is discussed in details before placing the proposals, Mamata’s one-hour-address revolved around welfare schemes and she took care to read out each one of them.

As the government has almost doubled the outlay under the head of social welfare and nutrition — from around Rs 19,000 crore to little over Rs 35,000 crore — Trinamul insiders said that the chief minister’s proposals were backed with sound arithmetic.

There was, however, lack of clarity on the vote-on-account’s projection of a tax revenue collection exceeding Rs 75,000 crore for the next fiscal, around 32 per cent more than the revised estimate of 2020-21. While neither Mamata nor Mitra explained the basis of this projection, sources in the government said that the forecast was based on expectation that the vote-on-account proposals would trigger heightened economic activity in the state, which, in turn, would result in tax buoyancy.

After laying a set of proposals with the theme of hope, Mamata drew inspiration from Netaji Subhash Chandra Bose’s famous call of “give me blood, I shall give you freedom” to lay her demand before the people of Bengal.

Seeking another term at the helm, she said: “Keep faith in me, I shall give you unconditional and selfless service with utmost dedication.”