The chief minister alighted from her vehicle to greet the cheering BGPM supporters in Kurseong and, along with Anit Thapa, flashed a victory symbol 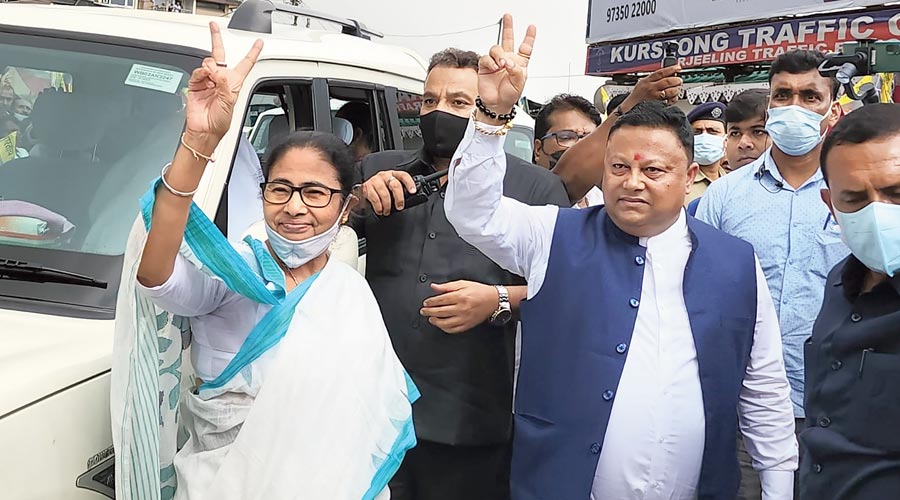 Mamata Banerjee reached Darjeeling on Monday evening, scaling a mountain of political challenges in the past five years, which culminated in the successful revival of the Gorkhaland Territorial Administration Sabha.

The chief minister will be present at the oath-taking of elected GTA Sabha members at Chowrasta here at 11 am on Tuesday.

When the hills were burning with the cry of a separate state of Gorkhaland five years ago in 2017, the odds against the revival of the hill body were high.

Trinamul, too, sprung a surprise winning five seats in its best ever show in Darjeeling politics.

“The chief minister has every reason to be satisfied as it’s her victory. The BJP and its alliance partner GNLF were opposed to the polls. Gorkha Janmukti Morcha leader Bimal Gurung, too, was against the elections. Despite the opposition from these key players, the polls went off peacefully, Mamata’s preferred party became the winner and Trinamul also gained significantly,” said an observer of hill politics.

In a celebratory mood, Thapa, who was leading his supporters on the streets of Kurseong, greeted Mamata in the Kurseong motor stand area when she made a stopover en route to Darjeeling on Monday.

The chief minister alighted from her vehicle to greet the cheering BGPM supporters in Kurseong and, along with Thapa, flashed a victory symbol.

“The people of Kurseong accorded a warm welcome to the honourable chief minister Mamata Banerjee. She allowed photographers to take photos. She asked me to get into her vehicle,” said Thapa.

An observer said: “Some people thought that it would be difficult for the Mamata-Anit camp to find acceptance in the hills, but this year’s electoral success has changed the perception.”

Many feel the persistence of Thapa and the consistent support of Mamata have managed to turn the tables.

A section in the hills believes that Mamata’s political manoeuvre was another key factor.

“Trinamul’s ability to get Bimal Gurung on its side actually changed the long-term dynamics of hill politics,” said a hill politician.

The Trinamul chairperson managed to wean Gurung from the BJP in 2020 and this completely changed the dynamics of hill politics.

It is another story that Gurung is currently struggling politically while Thapa has managed to seal his authority.

Mamata, however, managed to put the BJP under tremendous pressure.

The BJP has promised a “permanent political solution” and unless the Centre delivers on it, things will be difficult for the party. The BJP has also promised tribal status to 11 hill communities.

“Elected representatives of the GTA have to be involved in tripartite meetings concerning the hills. Things are not easy for the BJP now,” the observer said.

The Centre had only invited leaders of those political parties which were in alliance with the BJP in the hills to the last tripartite meeting.