16 protesters have died in police action in Uttar Pradesh, two have been killed in Karnataka 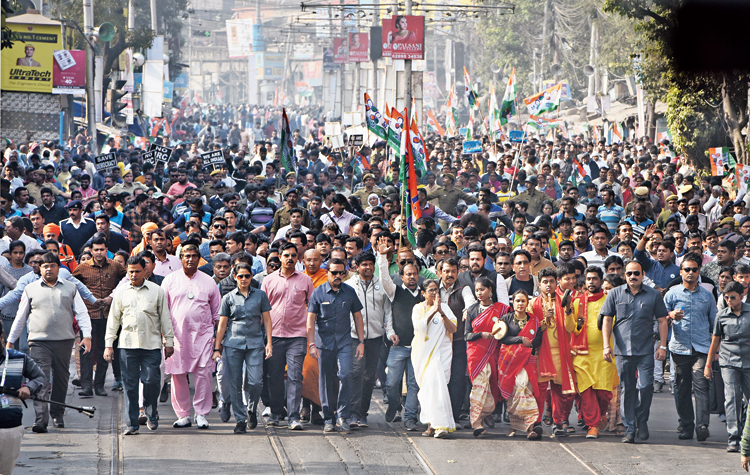 Mamata Banerjee on Tuesday underscored the difference between Bengal and BJP-ruled states in terms of law and order and the quality of democracy, pointing out that her party leaders were not allowed into Uttar Pradesh to meet the families of protesters killed in police action while central BJP leaders freely came to Bengal and abused her at rallies.

In her fourth mass march against the BJP’s push for the amended citizenship law and a nationwide NRC exercise, the Trinamul chief brought up the rally led by BJP national working president J.P. Nadda on Monday. There was no hindrance to the BJP march although police had not given permission for the event.

“Take a look at the condition of your own states first. Uttar Pradesh. How many shot dead? We sent a team, you did not allow them to step out of the airport,” the Bengal chief minister said.

While 16 protesters have died in police action in Uttar Pradesh, two have been killed in Karnataka.

A Trinamul team led by former Union railway minister Dinesh Trivedi had been detained by the Yogi Adityanath government at Lucknow airport on Sunday. Denied access to the victims’ families, the team had to turn back.

“And see the quality of Bengal’s law and order…. You are coming from Delhi, holding rallies and abusing me and going away; see the quality of democracy here. See how it feels,” Mamata said to loud cheers from thousands at Bidhan Sarani before starting her 4.7km march to Gandhi Bhavan in Beleghata.

On Monday, Nadda led a three-hour march from Wellington Square to Shyambazar in support of the Citizenship (Amendment) Act. In a rally dominated by communal overtones, Mamata and her alleged politics of appeasement were the sole focus of Nadda’s attack.

On Tuesday, Mamata — known for her ability to lead long marches on foot — mocked Nadda for having to take a car for the 5km route of his rally. “You are not letting our delegates out of the airport in Lucknow. And you came to Bengal — you can’t even walk, it hurts your lower back — you took a cavalcade, lectured and left,” she said.

Mamata announced she would lead a march in Siliguri on December 30, wasting no time after the BJP held a procession in the area on Tuesday, attended by, among others, former Maharashtra chief minister Devendra Fadnavis.