28% of pupils in govt-run primary schools have got disconnected from academic activities, and balanced diet has become a dream because of the loss in family income 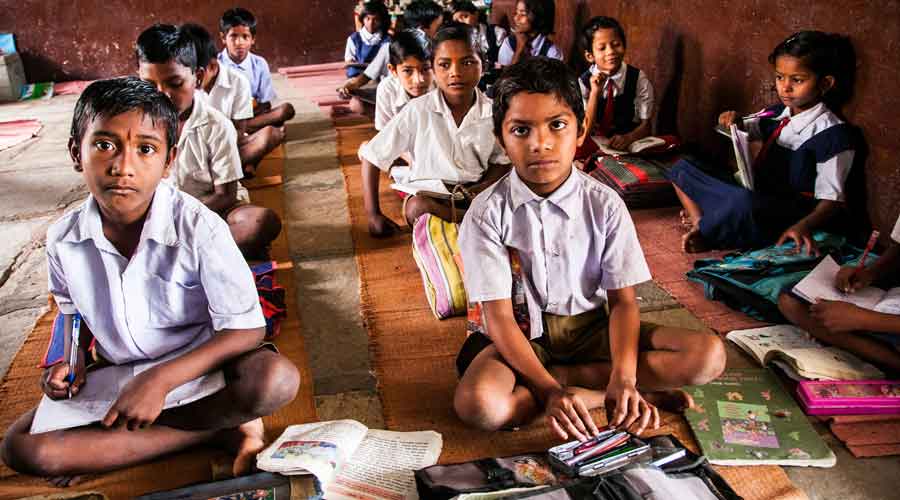 The statewide survey of learning abilities was conducted among 7,204 students from Class I to V by a panel of distinguished social researchers and teachers, including Sukanta Chaudhuri, professor emeritus of Jadavpur University.
File picture
Snehamoy Chakraborty   |   Bolpur(Birbhum)   |   Published 16.09.21, 03:04 AM

Around 28 per cent of pupils in government-run primary schools in Bengal have got almost disconnected from academic activities, and a balanced diet has become a distant dream for a significant proportion of the students because of the loss in family income, a first survey of its kind in the state has found.

The statewide survey of learning abilities was conducted among 7,204 students from Class I to V by a panel of distinguished social researchers and teachers, including Sukanta Chaudhuri, professor emeritus of Jadavpur University.

Besides enumerating the percentage of students connected with academic activities, the survey assessed — through questions on mathematics, Bengali, English and environmental studies — the learning abilities of the pupils who said they were connected with education in some form.

“We have learnt from the assessment that more than a quarter of the students we could contact did not receive any help from teachers or others and were almost disconnected from academic activities,” said the report, titled “Learning Together” and prepared by Shiksha Alochana, a collective of primary teachers and educationists set up in 2016 with the aim of improving the quality of schooling at the primary level.

The corresponding figures for students’ assessment — through questions on the four subjects at their level and from lower classes — was satisfactory for 44 per cent, average for 32 per cent and very poor for 24 per cent, the report said.

The findings, a researcher associated with the initiative said, have proven beyond doubt that the learning ability of students, especially in government primary schools, has been a casualty as pedagogy shifted online during the pandemic.

“The students in the government-run primary schools are mainly from working class backgrounds like daily labourers, cultivators and small traders. A significant proportion of them could not afford to switch to the online mode,” said a researcher.

If the exposure to academic activities is a concern, the bigger worry, the report has added, is the composition of the food basket for a majority of the students.

A simultaneous survey on the economic conditions of parents, by assessing 369 households, showed a huge loss in family income during the pandemic, which resulted in a decline in the consumption of cereals, pulses, fish, meat and vegetables by 14 per cent, 22 per cent, 33 per cent, 44 per cent and 24 per cent, respectively.

Besides Chaudhuri, the panel of academics and researchers associated with the survey included Achin Chakraborty, professor of economics and director of the Institute of Development Studies Kolkata (IDSK); Abhijit Chowdhury, eminent doctor and secretary of the Liver Foundation; Dilip Ghosh, former bureaucrat; and Anirban Chattopadhyay, journalist.

An almost similar survey in 15 states covering the learning achievements of students from Classes I to VIII — conducted under the guidance of economist Jean Dreze and others — had revealed that the nationwide situation is far dismal as only 28 per cent of rural and 37 per cent of urban students were found “studying at all”.

“The situation in Bengal, if compared with the one involving 15 states, is undoubtedly better, but there is little doubt that the situation is grave both at the state and the national levels,” said a researcher associated with the exercise in Bengal.

The Bengal report — to be published online on Thursday — has made some suggestions on how to ensure a better life for the students and their families.

As the fall in family income and the resulting low consumption of food have made it difficult for students to continue with their studies, there is an urgent need to start mid-day meals. Besides, the report has advocated special measures to fill the learning gap.

In the foreword to the report, Chaudhuri has written: “The problem will not go away once schools reopen; rather, that is when it will reveal its full extent. It cannot be solved within the normal curricular framework, or by the inadequate cadres of teachers in often ill-equipped schools.

“A special programme has to be created, and dynamically adjusted to the vagaries of the pandemic. It has to be implemented in mission mode, with community participation alongside formal schooling, which might continue to be impaired in the foreseeable future.”