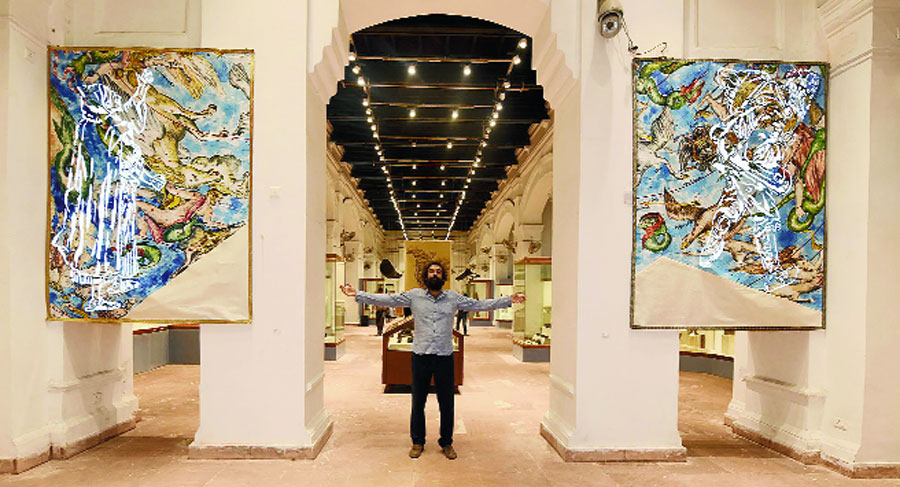 Celebrating the 70th anniversary of India-Italy diplomatic relations, Ruffo’s exhibition is one among the year-long events held to commemorate the occasion.

Earlier this year, an exhibition of Raphael’s paintings were brought to the Calcutta audience at the museum by the Italian Consulate .

“This is the last event marking the 70th anniversary of the establishment of diplomatic ties between India and Italy. We brought the Rafael paintings in March and Ruffo in November, classical and contemporary art. Ruffo’s work is specially relevant in today’s times, because it is inspired by migration.

“Bengal, too, is touched by the issue as its neighbour Bangladesh and Myanmar grapple with the Rohingya Muslim migration,” Damiano Francovigh, Consul Gneral of Italy.

“We are holding an Italian food festival inspired by migration, where chefs from Italy have chosen to prepare dishes that were not found on the tables of rich people.

“They have used inexpensive ingredients to prepare dishes that are just as tasty and juicy,” Francovigh said.

Ruffo, an architect by training and a painter by profession, has worked on migration as a theme for several years.

Here his paintings are on five maps of Africa, North and South America, Italy and India on which he has painted indigenous people as well as those who have arrived on those continents together.

“Migration is not just an issue today. It has been an issue for ages. Migration is in the DNA of human beings,” Ruffo said. He has painted on ancient maps done by French, American and English geographers. There are big tapestries representing people migrating looking at the stars.

“Ancient people travelled referencing stars, that is why my exhibition is called Constellations and Migration,” Ruffo said.

On the rich colourful tapestries, Ruffo has painted with phosphorous silhouettes of immigrants, that come alive as cameras flash on the artwork. Held at the anthropological gallery of the museum, Ruffo said: “This is the most appropriate place to hold an exhibition on migration.”

Inaugurating the exhibition Indian Museum director Rajesh Purohit said: “This is an exhibition of a different kind. It is reflective of the contemporary times and the artefacts of this gallery merge very well with Ruffo’s works.”

The exhibition is being held by the Indian Museum, the culture ministry, the consulate general of Italy in Calcutta, and the Italian embassy cultural centre, New Delhi, in association with Basu Foundation for the Arts.