Every party has a vision, this rally will be a confluence of those visions, a grand alliance of people, says Bengal CM

Mamata Banerjee said the event is for the national Opposition to sound the “death knell” for the BJP.
The Telegraph file picture
Our Special Correspondent   |   Calcutta   |   Published 17.01.19, 06:53 PM

Mamata Banerjee has pitched Saturday’s Brigade Grounds rally as a “United India” platform where other non-BJP forces would be given prominence, appearing to take a backseat at what promises to be one of her biggest gatherings.

“I don’t want to say anything. Let them say. I want to hear them. This is about those coming here for the pan-India BJP fight in the Lok Sabha election. It’s about consensus,” the Trinamul chief said on Thursday during a recce of the venue.

Although Trinamul sources said the event was meant to pitchfork the Bengal chief minister to the pole position in the national Opposition space, Mamata suggested she was content playing the host.

The event, she asserted, is for the national Opposition to sound the “death knell” for the BJP.

Mamata recalled her 1993 rally at the same event where — as a Youth Congress leader — she had predicted the downfall of the Jyoti Basu-led Left government.

“Every party has a vision, this rally will be a confluence of those visions, a grand alliance of people. This is not about individuals or specific parties. This is the United India rally.”

Mamata said the programme will begin at noon but was unwilling to set a deadline for its end as the “priority was to give every non-Bengal representative the chance to address the nation from the Brigade dais”. “So many heavyweight leaders, so many chief ministers, a former Prime Minister, former Union ministers, former chief ministers, chiefs of parties… all will be attending this historic rally.”

The Trinamul chief, a strong advocate of federalism and the importance of regional parties, forecast a decisive role for them.

“The regional parties will be the deciding factor after the elections. I cannot say how many seats the Congress will get. It will depend on the elections…. The rest of the parties will play a vital role,” she said in response to a question.

Asked if she was disappointed that Mayawati may not attend the rally, Mamata pointed out the BSP chief would send senior leader Satish Mishra as her representative.

“This is a big thing for us….(Mallikarjun) Khargeji and (Abhishek Manu) Singhviji will represent the Congress. Everybody is important here,” she said. 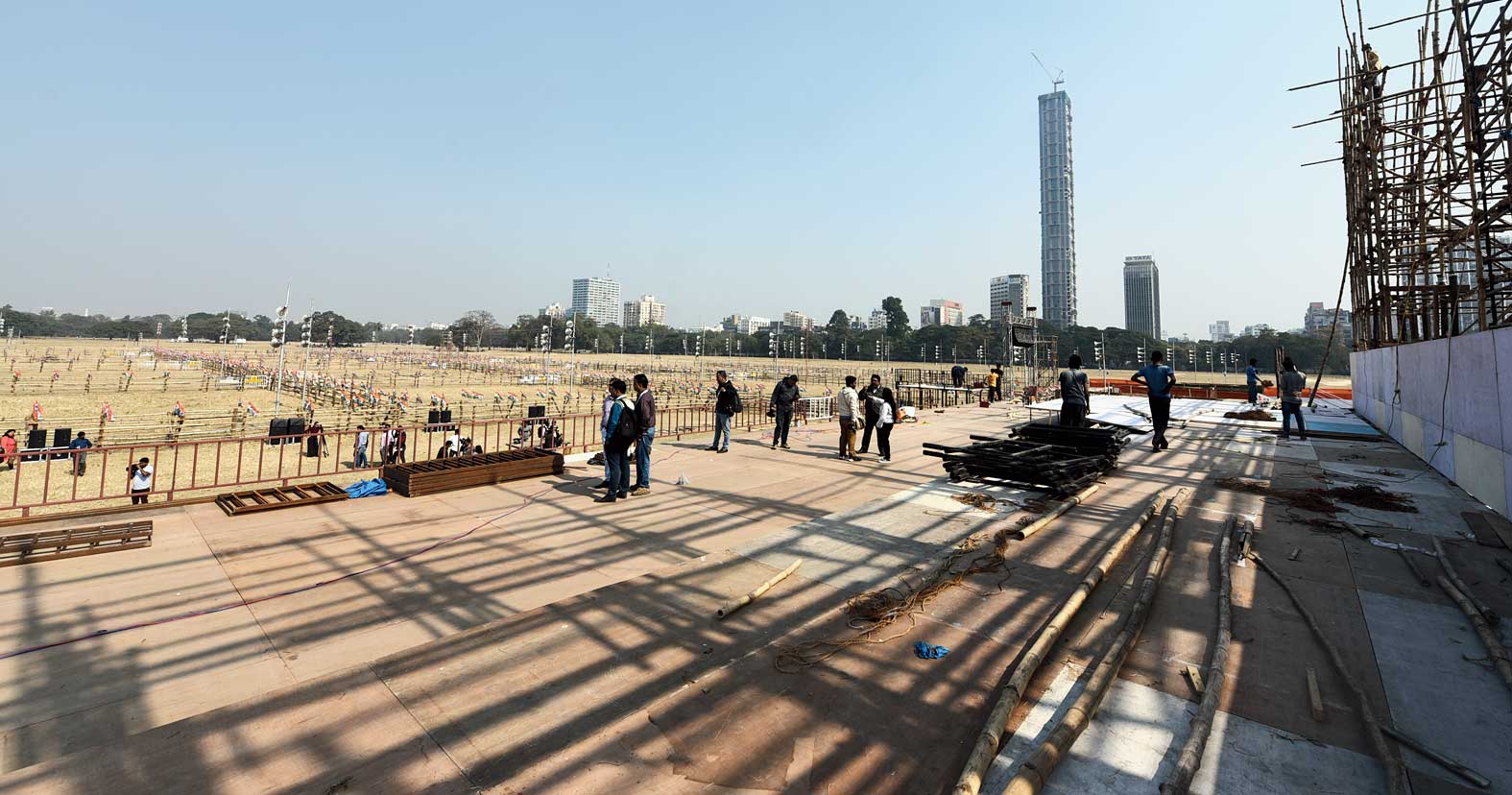 Stages being erected at the Brigade Parade Grounds on Thursday.
Picture by Pradip Sanyal

Forty-eight hours before Mamata Banerjee’s “mega rally” at the Brigade Parade Grounds on Saturday, The Telegraph takes a close look at the arrangements. The chief minister herself visited the venue and checked the arrangements.

Five stages, adjacent to each other, have been erected. The main stage will have Mamata and leaders of other parties. There is one podium each for performers, members of Trinamul’s culture clan, party MLAs and district leaders, and MPs and ministers.

Mamata to host the show with a cordless microphone. Twenty giant multi-LED screens will air the event live at the venue. One thousand loud speakers will carry the message from the stage to all corners of the Brigade and beyond.

Calcutta police have drawn up an elaborate security plan with 10 watchtowers and dozens of drones. At least 5,000 police personnel will be present in and around the venue. Around 3,000 Trinamul volunteers will co-ordinate with the police.

Trinamul has set a target of over 50 lakh with party leaderships in larger districts being told to send 4-6 lakh people each. Even if half the target is met, the crowd will spill onto the streets as the venue doesn’t have the capacity to accommodate more than a million, said a police source.

Trinamul supporters from far-away districts started reaching the city since Wednesday night. They were being put up at Alipore’s Uttirna, Rajdanga’s Geetanjali Stadium, Kshudiram Anushilan Kendra next to the Eden Gardens, the Central Park fairground in Salt Lake and various other venues.