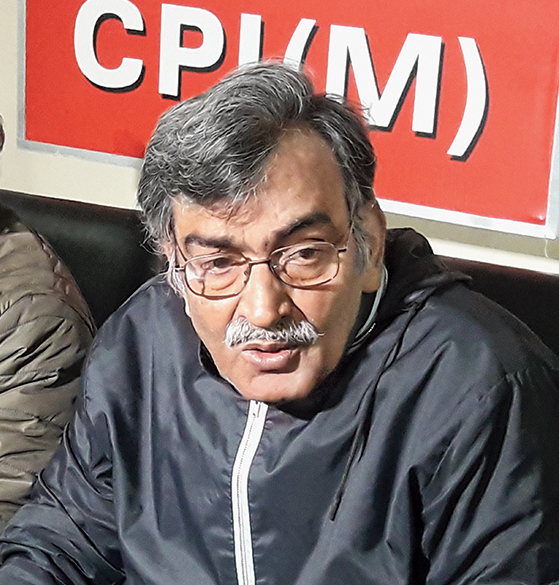 Mishra at the Darjeeling district CPM office in Siliguri on Friday.
Picture by Passang Yolmo
Our Correspondent   |   Siliguri   |   Published 24.01.20, 07:57 PM

Bengal CPM secretary Surjya Kanta Mishra hinted on Friday that the party would field sitting councillors of the Siliguri Municipal Corporation for the coming polls.

“The SMC board had gone through a tough period in the past five years and despite several deterrents, the civic body functioned properly. Some people had even resorted to horse trading to topple the board but did not succeed. The board is all set to complete its tenure successfully,” said Mishra.

He was here to attend a two-day organisational meeting of the CPM’s Darjeeling district committee.

The Left has 22 councillors at the SMC where the majority mark is 24. Mayor Asok Bhattacharya has managed to pass all major decision at the board with the support of four Congress councillors. The total strength of the board is 47.

“We believe the same team that runs the board will be able to achieve success in the coming days,” said the CPM state secretary.

The SMC elections are likely to be held in a few months. The CPM and the Congress have already declared that they will contest the polls together.

Asked whether Bhattacharya would be projected as mayoral candidate for the second time, Mishra avoided a direct reply.

“It is too early to comment on it,” he said.

Sources in the district CPM, however, said the party was all set to project Bhattacharya as the mayoral candidate. In 2015, the party had formally made the announcement ahead of the elections, a move that is believed to have worked for the Left to secure 23 seats and prevent Trinamul from coming to power.