Altercation started when a woman in her 30s, gave the conductor Rs 10 and got back Re 1 instead of Rs 3 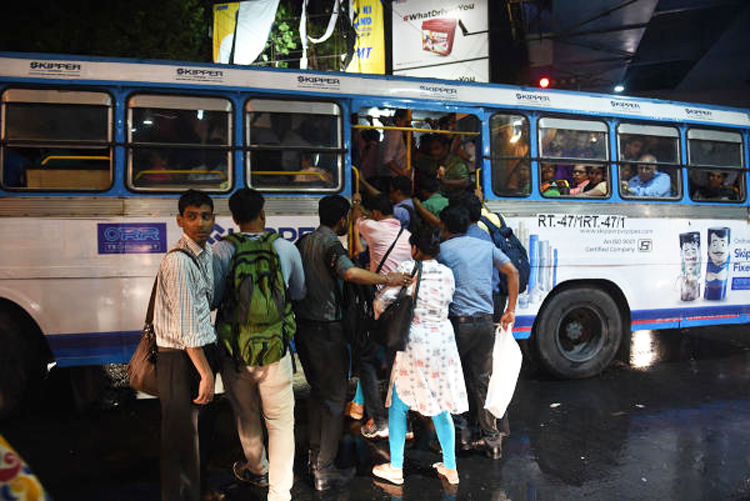 The woman in her 30s, who works at a nursing home in Beleghata and usually gets off at Phoolbagan, was taken till the BC Roy Hospital stop as she continued to protest the conductor’s alleged misbehaviour and refused to get off.
(Representational image: The Telegraph file picture)
Our Special Correspondent   |   Sealdah   |   Published 15.01.20, 09:10 PM

A woman got off a bus, lodged a police complaint and ensured the arrest of a conductor, who she said had pushed and heckled her when she protested charging her more than the official fare on Wednesday.

The woman in her 30s, who works at a nursing home in Beleghata and usually gets off at Phoolbagan, was taken till the BC Roy Hospital stop as she continued to protest the conductor’s alleged misbehaviour and refused to get off.

However, after getting off the bus, she went to Beleghata police station and lodged a complaint.

Police said the woman had boarded a bus of route number 44 — which plies between Baguiati and Howrah — for her workplace in Beleghata.

The altercation started when she gave the conductor Rs 10 and got back Re 1 instead of Rs 3, a cop said.

“When the woman asked the conductor the reason for charging her more for the distance from Lake Town to Phoolbagan, he said the fare had increased. She then challenged him and insisted on refunding the excess fare charged,” said an officer of Beleghata police station.

The conductor — later identified as Sajal Haldar, 36 — refused to pay heed and went about his job of issuing tickets.

The police said the woman refused to get off the bus at the stop she was supposed to and kept protesting.

At this, the conductor allegedly pushed her and touched her inappropriately.

The woman got off near BC Roy Hospital and went to Beleghata police station to lodge a complaint against the conductor.

“As she could give us the bus route and also had the ticket with the bus number, it was not difficult to track it down. We immediately took cognisance of her complaint and alerted traffic cops to intercept the bus,” a senior officer said.

The bus was intercepted and the conductor arrested at the spot. The police said several witnesses, who were travelling on the bus, corroborated the complainant’s version. The rate chart of the bus was seized as a piece of evidence.

Senior police officers said harassment of women in public transport — be it in form of altercation over fare or harassment by co-passengers — was not new in the city, but increasingly, more women were coming out to report the matter to the police, leaving aside the stigma of being the victim of sexual harassment.

“This is an encouraging trend,” said the officer.