The tribal icon was remembered on Monday with much fanfare at several villages in Birbhum, where the Deocha-Pachami mine project will come up 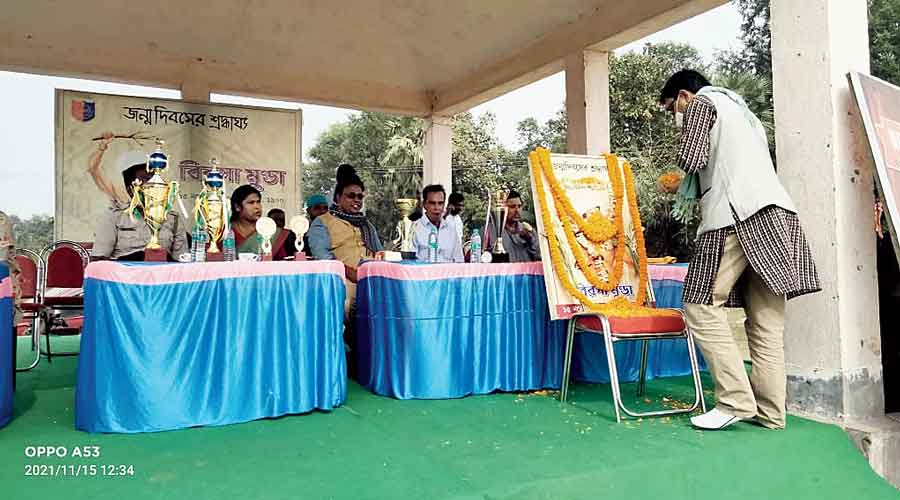 The birth anniversary of tribal icon Birsa Munda was celebrated on Monday with much fanfare at several villages in Birbhum, where the Deocha-Pachami coal mine project will come up, as part of the Bengal government and the Trinamul Congress’s attempt to woo adivasis and build a consensus on the project which the ruling party thinks will change the economic landscape in the state.
Several cultural events and football tournaments were organised at Harinsingha, Dewanganj — the two places from where the government is likely to kickstart mining —and Sagarbandhi, Mohammedbazar and few other places through the day. Villagers participated in the programmes with enthusiasm as this is the first time that the icon’s birthday was celebrated with such pomp and show.

“We have been asked to reach out to the tribal people with the details of the rehabilitation package that the government is offering to the land losers. Birsa Munda is an icon of the tribal people and it would certainly help us win over the people here by showing respect to him,” said a Trinamul leader in Mohammedbazar.
The project area has mostly tribal residents.

Chief minister Mamata Banerjee had on November 9 announced the rehabilitation package worth Rs 10,000 crore, including offer of a government job as junior constable for every land-losing family and Rs 10-13 lakh per one bigha land which is around three times the market rate.

Besides the cultural outfits of Trinamul and some tribal organisations, district police also got into the act as they organised an event in Harinsingha to pay tributes to Munda.
Although the events witnessed large participation, some tribal leaders sounded a word of caution for the government.

“We know the events were organised to woo the tribal people so that they accept the rehabilitation package.… But there are several issues that need to be resolved and the villagers want a direct communication with the government before any work starts,” said Sunil Soren, a leader of the Birbhum Adivasi Gaonta, who himself organised two programmes.

Another faction of the tribal outfit led by Rabin Soren had organised a separate programme at Sagarbandhi. Bharat Jakat Majhi Pargana Mahal, another tribal outfit, also held an event at Mathurapahari village.

Local Trinamul leaders tried to de-link the celebration from the upcoming project.
“We are celebrating Birsa Munda’s birth anniversary on a large scale and we will continue with it every year. Our chief minister has shown respect to the icon by declaring a holiday on his birth anniversary.... There is no connection between the events today and the coal mine project,” said Kali Prosad Banerjee, block youth Trinamul president in Mohammedbazar, who attended at least three programmes on Tuesday.

Faux pas
The BJP came under criticism for its alleged faux pas over the tribal icon as MLA from Bankura Niladri Sekhar Dana on Monday garlanded the same statue of a tribal hunter that Union home minister Amit Shah had garlanded considering it to be of Munda. The faux pas invited criticism from different corners, including tribal outfits.
Trinamul leaders alleged that by repeating the mistake, the BJP leaders were trying to establish the statue as that of Munda.
Dana, the BJP MLA, said he didn’t want to get into the controversy.
“It was the birth anniversary of Birsa Munda and I paid tributes to the same statue that Amit Shah had garlanded.... I will not go into debates on whose statue it is. I can only say the statue represents a tribal person and we paid respects to it on the birth anniversary of Birsa Munda,” said Dana.