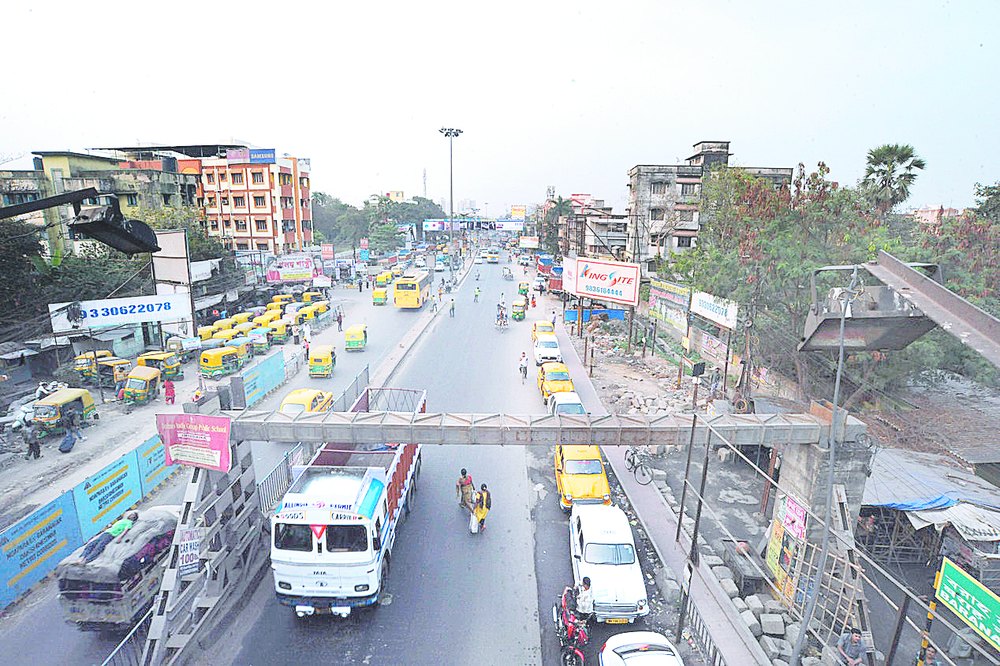 The proposed Barrackpore Metro is unlikely to see the light of the day because of the Trinamul dispensation's inability to provide land.

The Trinamul-run Calcutta Municipal Corporation has ruled out shifting multiple water lines that run along BT Road, sealing the fate of the Baranagar-Barrackpore Metro project.

All Metro projects in Calcutta are stuck at various points because of land logjam but the Baranagar-Barrackpore one is the first to have virtually been shelved.

Railway sources said the Noapara-Baranagar-Dakshineswar project was still on but work was yet to start because of the government's failure to remove encroachers.

As for the Rs 2069.6-crore Baranagar-Barrackpore project, the problem posed by the underground utilities was apparent from the beginning but the civic authorities had promised to remove them and facilitate construction while signing an MoU with the railways in 2011.

The railway ministry was then a Trinamul Congress fief, headed by Mamata Banerjee.

Mayor Sovan Chatterjee said the CMC had asked the railways to look for an alternative route as it was not possible to dig BT Road for laying the tracks.

"We have six water lines under BT Road, which are essential for Calcutta (the pipes bring water from the Palta water works to the Tallah reservoir)," Chatterjee told Metro.

"Besides, there are at least six water lines of other municipalities, including Panihati and Sodepur. There can be a disaster if any of these pipes are damaged. So digging BT Road is out of question. We have asked the railways to look for other options."

A Metro official said the civic body had "informally" conveyed their stand on digging up BT Road to them. "We are waiting for the CMC to write to us and then we'll get in touch with the Railway Board on the issue."

Apart from the CMC's stand, railway officials pointed out, what has put paid to the project is the state government's refusal to shift 1,200 settlers from the route.

The decisions will affect around 100 big and small realty projects coming up near BT Road along the 12.5km stretch of the proposed Metro route.

According to real estate dealers, the property price along the artery that stretches from Shyambazar to Barrackpore varies between Rs 3,000 and Rs 3,500 a sqft.

"A 2BHK flat is available at Rs 3,400 a sqft as there is no progress in the Metro project. As soon as construction starts, the price will go up to Rs 5,000 per sqft," said an official of Godrej Prakriti, a 2,500-flat estate coming up in Sodepur, off BT Road.

"Everyone is waiting for Metro work to start. Many buyers have purchased properties hoping the Barrackpore Metro would start running by the time they move in," said Krishnendu Dutta, a realtor in Sodepur.

Developers said at least eight big realty projects started on or off BT Road after the Metro project was announced.

"Transport options and commuting are some of the key factors people consider while planning to invest in properties," said a developer.

Commuting through BT Road has been a nightmare for decades, residents say. It takes nearly one-and-a-half hours to travel from Sodepur to the heart of the city, a distance of 15km. A Metro ride would have taken about 20 minutes to cover the distance.

A government official said the underground utilities were not taken into account when the project was planned. "The detailed project report was prepared in haste and the survey only mentioned the alignment. That was a crucial mistake," the official said.

The report was prepared by consultant firm Rites, which functions under the railway ministry, and sanctioned by the Mamata-led ministry in 2010-11.

Railway engineers claimed a detailed project report did not include a detailed study of underground utilities. "The CMC did not raise any objection to the report then," said a railway official.

In 2011, a private agency was hired to study the underground utilities. The study found two big pipelines of the CMC - one of 60-inch diameter and the other of 42 inches.

The civic body had promised in the MoU it had signed with the Rail Vikas Nigam Ltd, the implementing agency of the project, to dismantle the two pipelines after a pipe of 64-inch diameter was installed.

In October 2012, the new pipeline was installed but the old ones were not dismantled. By then Trinamul had quit the UPA II government.