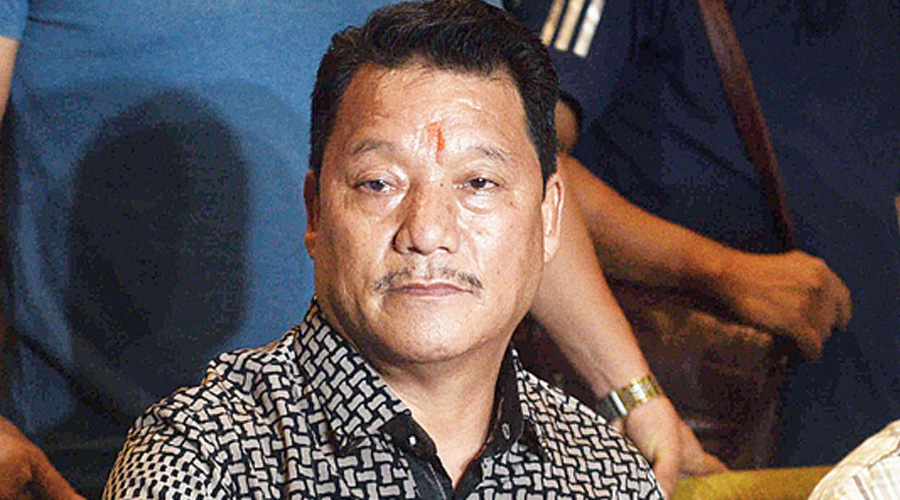 The Gorkha National Liberation Front, which is an ally of the BJP, on Tuesday said it would not only refrain from contesting Gorkhaland Territorial Administration elections but would also hit the streets to stop the polls from being held.

The GNLF’s stand could raise the political temperature in the hills during the winter after four years of relative lull.

Many believe the GNLF’s current posturing is an indication of the tight spot the party and the BJP find themselves in following the Bengal government’s announcement to hold the GTA elections which have been due since 2017.

M.K. Subba, the president of the GNLF Darjeeling branch committee, on Tuesday said: “We will not participate in the GTA elections.

In fact, we will hit the streets in thousands to stop the GTA elections.”

On Tuesday, the GNLF plastered posters across the hills seeking the dissolution of the GTA. The Gorkha National Students’ Front, a wing of the GNLF, wrote to Union home minister Amit Shah, flagging the same issue.

GNLF president Anmol Nirola in the letter requested Shah to “kindly intervene and dissolve the GTA immediately and find a permanent political solution to the problem of the Gorkhas, once and forever”.

“These political stooges are openly involved in corruption under the political patronage of the state government,” the letter reads.

The memorandum of agreement to set up the GTA had been signed by the central and state governments and the Bimal Gurung-led Gorkha Janmukti Morcha in 2011. The Bengal Assembly passed an Act a year later to form the GTA.

Observers believe the GNLF and the BJP which are both opposed to the GTA have been pushed to a corner following Mamata Banerjee’s announcement to hold GTA elections after the revision of electoral rolls is completed on January 5.

“The GNLF and the BJP are opposed to the GTA. The GNLF even challenged the GTA’s constitutional validity in Calcutta High Court. Given this stand, it would be difficult for the GNLF and the BJP to contest the GTA elections,” said an observer.

“However, if the GTA elections are held, their rivals will win, a situation which the GNLF and the BJP want to avoid at any cost.”

So far, Anit Thapa’s Bharatiya Gorkha Prajatrantik Morcha and Ajoy Edwards’s Hamro Party have clearly said they will contest the elections. Bimal Gurung’s Gorkha Janmukti Morcha wants the GTA elections to be held after the state government works out a “permanent political solution”.

Many leaders of the Bimal Gurung camp, however, privately expressed that they would have no option but to contest the elections if the state government went ahead with the plan.

“Looking at the overall situation, the GNLF and its allies have no option but to try their best to stall the GTA elections,” said an observer.

Mamata Banerjee will be reaching Darjeeling in the last week of December and a final decision on conducting the elections might be worked out during her visit.