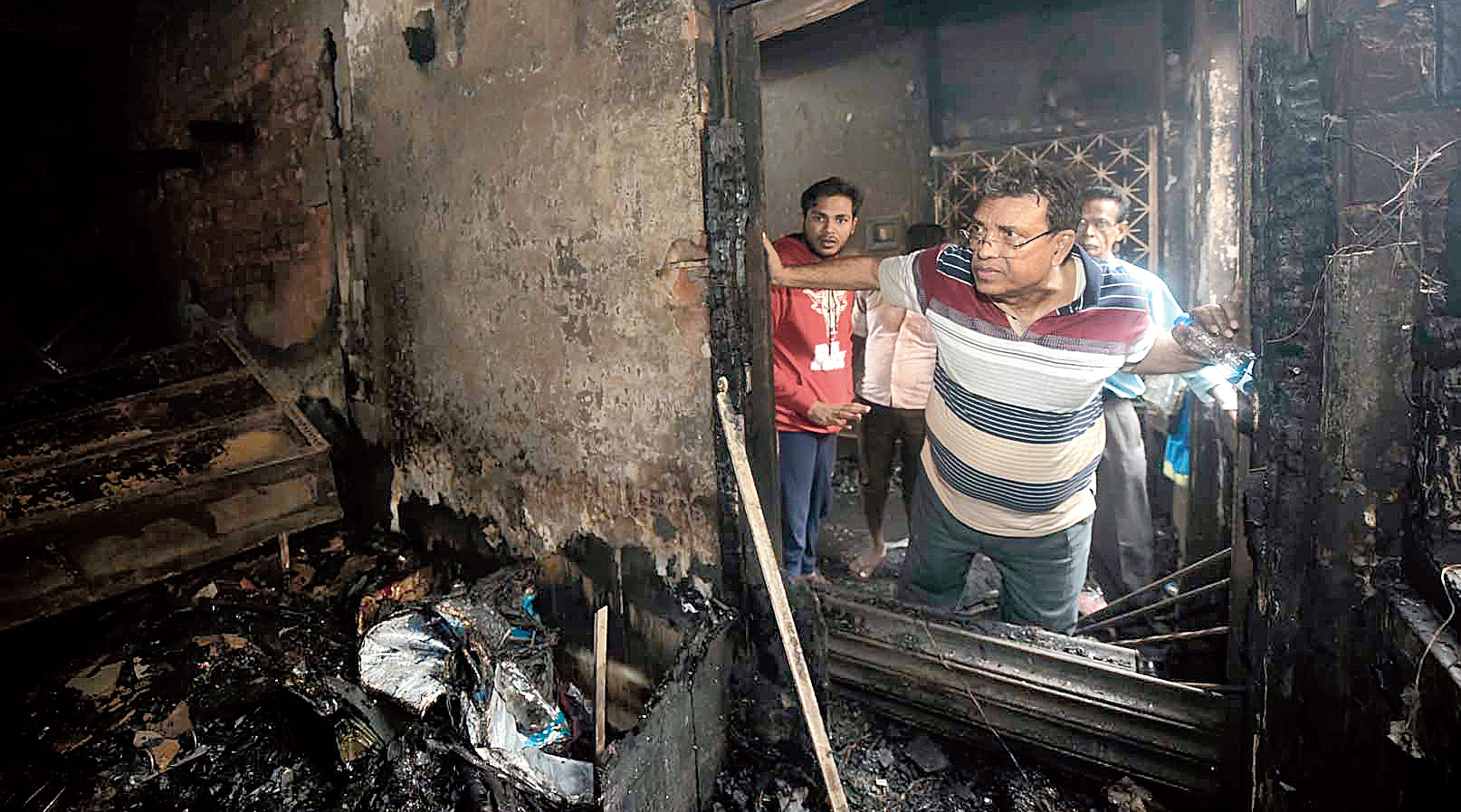 The old, five-storey building at 161/A and 161/B Rashbehari Avenue that caught fire early on Sunday allegedly did not have even a barebones firefighting system comprising an alarm, sprinklers and a reservoir. The few extinguishers that firefighters found belonged to individual occupants.

The flames took close to 10 hours to douse because there was no equipment to keep the blaze from spreading, an official of the fire services department said.

Traders Assembly and Adi Dhakeswari Bastralaya, the two landmark sari stores in the building, had allegedly converted portions of the top floor into storerooms without any fire-safety equipment. Both storerooms were gutted.

“My entire stock has been reduced to ashes. I am not sure I will be able to set up my business all over again,” said Manabendra Saha, a co-owner of Traders Assembly.

On Sunday afternoon, Saha had entered the charred second level of the store to retrieve a red diary containing information crucial to his business. He was dissuaded from spending more time there because of the risk of inhaling noxious smoke from the debris.

Adi Dhakeswari Bastralaya has rooms on the ground and first floors that used to house a large collection of saris, shawls and other garments. “The large stock of silk and synthetic garments helped the flames spread rapidly,” the fire services official said.

Several occupants of the building blamed allegedly illegal construction within the floors occupied by commercial establishments for the scale of the disaster. Saha declined comment on the allegation.

A member of the family that owns the portion of the building occupied by Traders Assembly and Adi Dhakeswari Bastralaya said lack of firefighting equipment had made the five-storey building more susceptible to the blaze, which is suspected to have originated outside.

“Construction was carried out on the floors that I had rented out to two sari shops. None of them installed firefighting equipment,” said Prasenjit Kundu Chowdhury, whose father Prabir Kundu Chowdhury is one of the owners of the building.

Prasenjit said his father owns 161/B Rashbehari Avenue, where Traders Assembly and a part of Adi Dhakeswari Bastralaya are located.

Mayor Firhad Hakim, who visited the site on around 2.45pm, said he would wait for the outcome of the investigation to find out if all the safety and other requirements listed by the Calcutta Municipal Corporation (CMC) had been followed or not. “I have asked the fire services department to find out whether the commercial occupants have valid documents and firefighting equipment, including sprinklers. Since this is an old building, firefighting measures are all the more important.”

Power minister Sovandeb Chatterjee said the blaze was another lesson for owners and occupants of buildings across the city. “The Gariahat incident has shown what can happen if those who run their businesses from such buildings do not take any measures to prevent fire.”

A couple of families residing in the building had fire extinguishers in their apartments.

“I had installed one for home use in the event of a small fire. How would one such extinguisher help in fighting the raging flames that were seen last night?” said Suman Ghosh, an advocate.

Rudranil Bhattacharya, a resident occupying the rear portion of the building that was unaffected by the blaze, alleged that the police and the CMC had been informed several times about garments being allegedly stocked in rooms without any fire safeguards.

“We had a fire in December that was triggered by an electrical short circuit in a meter box. We complained about this to the fire brigade but no action was taken. We are living here at high risk to our safety. There are several sets of generators in the building,” he said.