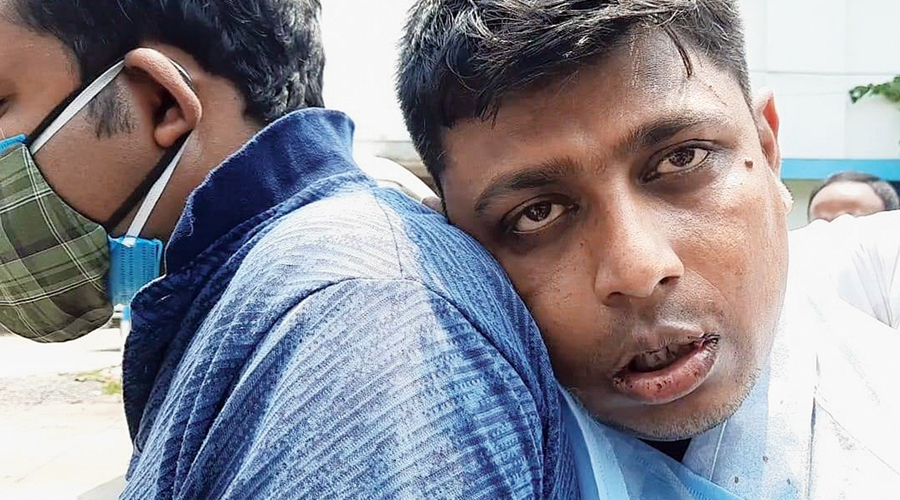 Fresh violence erupted on Friday in Raiganj, the district headquarters of North Dinajpur, as a young Trinamul worker of ward 25 of the town was allegedly attacked by a local BJP leader and his associates with firearms.

The BJP won the Raiganj Assembly seat for the first time.

Trinamul worker Abhijit Sarkar, in his early 30s, could escape alive as residents came out and resisted his attackers, who then fled from the spot, he later said. A complaint has been filed. The police have initiated a probe.

Sources said that on Friday morning, Abhijit, who stays in Debinagar, was heading towards a local market. Then, Ashim Adhikari, a former Trinamul ward councillor who joined the BJP before the polls, and some others with him, intercepted Abhijit.

Trinamul leader Prashanta Mallick accused Adhikari of taking out a revolver and hitting Abhijit with its butt. “Ashim Adhikari’s associates also joined him and rained blows on Abhijit. The BJP leader also tried to shoot our party worker. Abhijit was saved as some residents came out when he started screaming. He has suffered multiple injuries and has been admitted to the Raiganj Government Medical College and Hospital,” said Mallick.

Mallick also alleged that Adhikari and his aides had been threatening Abhijit, a popular face of Trinamul in the area, and his family for the past few weeks.

“This attack (on Abhijit) has again proved what the chief minister said yesterday (Thursday). Wherever the BJP has won, its workers have been perpetrating violence and attacking our people without provocation,” added Mallick.

Adhikari denied the charges and instead said some Trinamul workers had attacked him.

A police team reached the site later. “We will speak with the injured person. Our officers are getting information from the spot,” said a police officer.

On Thursday, a group of BJP workers attacked Udayan Guha, the former Trinamul MLA of Dinhata in Cooch Behar, who lost to the BJP by only 57 votes. Guha ended up with a fractured right hand.