Hours after Gurung’s announcement, Rai said the hunger strike would start from Wednesday as permission to hold it at Chowrasta had not been obtained from Darjeeling municipality 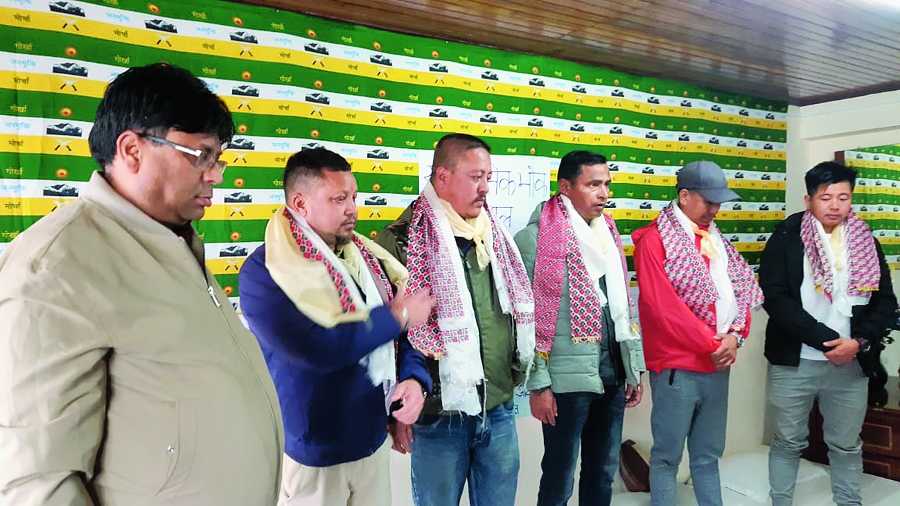 Morcha general secretary Roshan Giri (left) with the participants in the ‘token hunger strike’ in Darjeeling on Monday.
Vivek Chhetri   |   Darjeeling   |   Published 17.05.22, 12:02 AM

The Gorkha Janmukti Morcha started a “token hunger strike” in Darjeeling from Monday but the event had been preceded by confusion and last-moment changes, which became the hallmarks of Bimal Gurung’s party in recent times.

The fast was launched to meet the Morcha’s demand that all powers of the Gorkhaland Territorial Administration that had been agreed on in 2011 be implemented first before elections to the hill body are held.

The state government has already appointed the Jalpaiguri divisional commissioner as the election authority and the Darjeeling district magistrate as the election officer for the GTA polls which are likely to be held in June.

Noman Rai, the general secretary of the Gorkha Janmukti Yuva Morcha, the party’s youth wing, said: “Five of us have started a token hunger strike at the Singamari party office. The hunger strike started at 1 pm and will continue till 6pm today (Monday).”

Morcha president Bimal Gurung had said on Sunday that the Yuva Morcha would hold a “relay hunger strike” at Chowrasta from Monday. Hours after Gurung’s announcement, Rai said the hunger strike would start from Wednesday as permission to hold it at Chowrasta had not been obtained from Darjeeling municipality.

The civic body is run by the Hamro Party. However, the Morcha decided to start a “token hunger strike” which was different from what both Gurung and Rai had announced.

“We will also hold a fast from 10am to 6pm tomorrow (Tuesday) and will simultaneously work to get the civic body’s permission,” said Rai, who also participated in the “token hunger strike”.

The civic body remained closed on Monday on account of Buddha Purnima. “We will have to see what needs to be done following tomorrow’s development at the civic body,” said Rai.

Last-minute changes in the stand are not new to the Morcha of late.

Gurung had announced a few months ago that he would “not contest GTA elections.” Gurung is, however, now demanding more powers for the GTA before elections are held.

Many in the hills believe Gurung’s frequent changes in the stand are an indication that he is not confident of facing the GTA polls.

“Recent elections show the Morch has lost much support in the hills. Gurung clearly seems edgy to face the GTA elections,” said an observer.

Gurung’s party had come third in all three hill Assembly seats last year. The party could win only three seats in the polls to the 32-member Darjeeling municipality held recently.

“Gurung is aware that the party that wins the GTA elections is likely to dominate hill politics,” the observer said.

The recently formed Citizen’s Forum has also demanded that both the Morcha and the Centre, two of the signatories to the GTA memorandum of agreement in 2011, clear their stand on the hill body.

The Union home minister had said recently that the GTA elections would not fulfil the aspirations of the hills.

“The other signatory, Morcha, also seems opposed to the GTA. In such a situation, the Union home minister should clarify the centre’s stand on the GTA and also enlighten us on the alternative his government is thinking of,” said Swaraj Thapa, member of the forum. The forum is, however, opposed to the GTA.