The mishap occurred on the second floor of Victoria Hotel spread rapidly through the stairwell, prompting boarders to climb out onto ledges or climb down 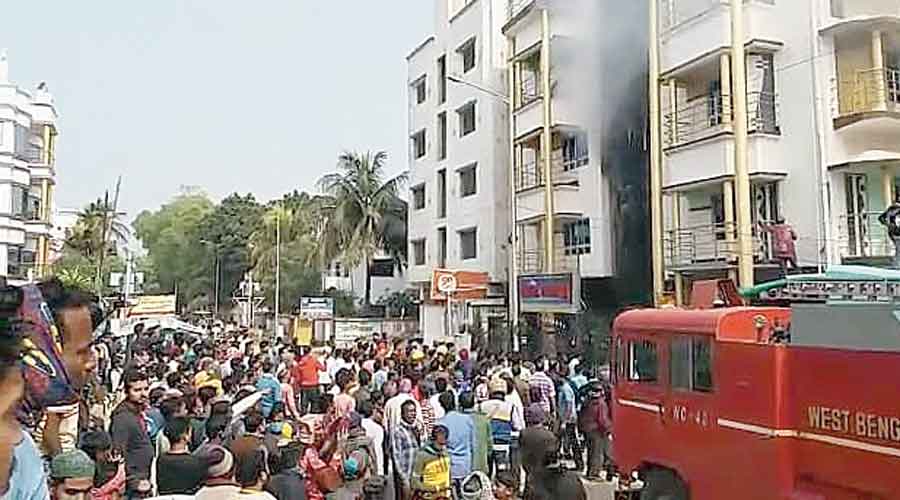 Ten tourists were injured, one of them grievously, when a fire broke out on Thursday morning at a hotel in the seaside resort of New Digha in East Midnapore.

Bhubaneswar resident Shivbrat Mishra, 30, had reportedly been trying to escape to safety from the second floor when he fell to the ground and shattered bones on the left arm severely. He was first rushed to Digha State General Hospital and then referred to a hospital in Cuttack for emergency surgery.

“The fire that started most likely from a short circuit quickly filled the stairway up with smoke, rendering it impossible to be used,” said Mahisadal resident Bidhan Jana, who was residing on the second floor. Sources said the hotel’s lift was shut down as soon as the fire broke out owing to power outage.

A boarder waits on the ledge to be rescued.
Telegraph photo

Bishwanath Roy, a resident of Siliguri, was on the second floor of the hotel when the fire broke out. He had come with a group of friends to Digha on Thursday morning and had checked into the hotel. “I went to the bathroom at 11am and smelled something burning. Then, I came out of the room and saw flames leaping from the same floor I was staying on. Seeing the stairwell filled with black smoke, my friends and I made our way down by the pipes,” he said.

Digha Shankarpur Hoteliers’ Association president Sushant Patra said: “The number of tourists in Digha was very low as tourist towns were closed till January 31. The 40-room hotel had relatively few tourists on Thursday. Nonetheless, several people were injured when trying to climb down by pipes and cornices.”

“Two fire engines brought the situation under control,” he added.