The boring machine had hit an aquifer on August 31 last year, triggering a subsidence 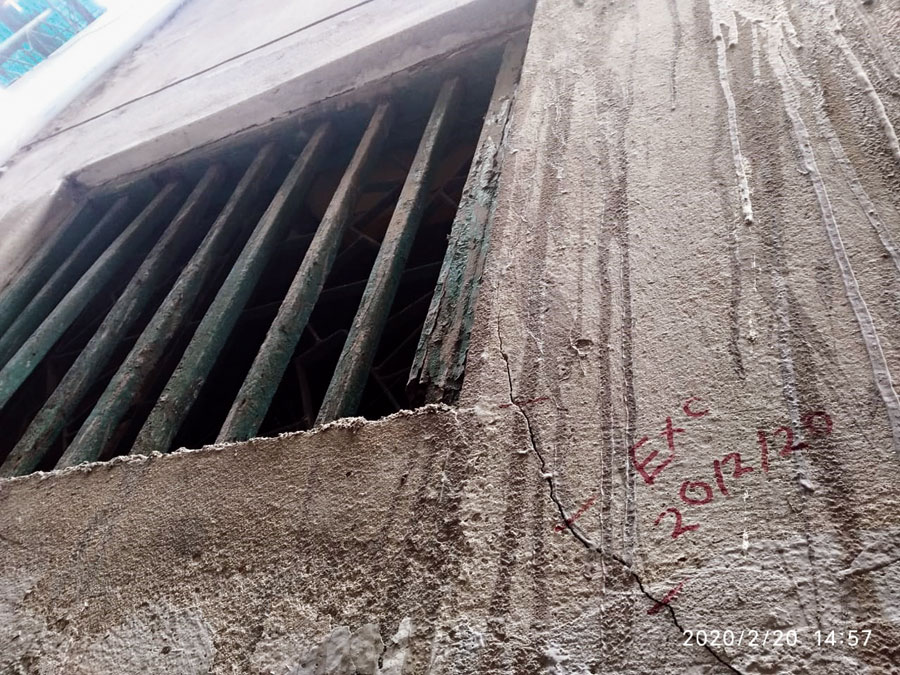 The East-West Metro authorities marked cracks on some of the buildings in Chaitan Sen Lane in Bowbazar on Thursday so that new ones can be identified if they develop when the tunnel-boring machine moves.

The project will connect Salt Lake’s Sector V with Howrah Maidan via a stretch under the Hooghly.

The tunnel-boring machine is now under Nirmal Chunder Street in Bowbazar and is expected to move below Chaitan Sen Lane, behind Syakrapara Lane, when work starts within a week.

Both lanes have rows of old buildings and Kolkata Metro Rail Corporation (KMRC), the project’s implementing agency, doesn’t want to take any chance.

The stretch between Bowbazar and Sealdah is the tunnel’s last leg.

The boring machine had hit an aquifer on August 31 last year, triggering a subsidence that resulted in many buildings across parts of Durga Pituri Lane, Syakrapara Lane and adjoining streets in the Bowbazar area collapsing or developing cracks.

Officials checked the buildings in the area on Thursday afternoon and marked dates on existing cracks.

“A team of engineers have been working on some of the buildings in Chaitan Sen Lane for sometime. We have put up props in several houses. In others we have carefully examined the existing cracks,” an official who was at work on Thursday afternoon said. “The idea to put a date against a crack is to help us compare them with new cracks if they surface at all.”

Some residents said KMRC officials had put up iron props in buildings after explaining to them why they were needed. A few families have already been evacuated from Chaitan Sen Lane and officials said more were likely if it was found their houses fell in the path of boring machine and the structures might not be able to withstand the underground vibrations.

Last week, Calcutta High Court had allowed KMRC to start tunnelling work up to 5m in Bowbazar. The company had moved the court, seeking permission to move the machine for maintenance work. The court had directed KMRC to work in accordance with the recommendation of an expert committee on shifting the machine.