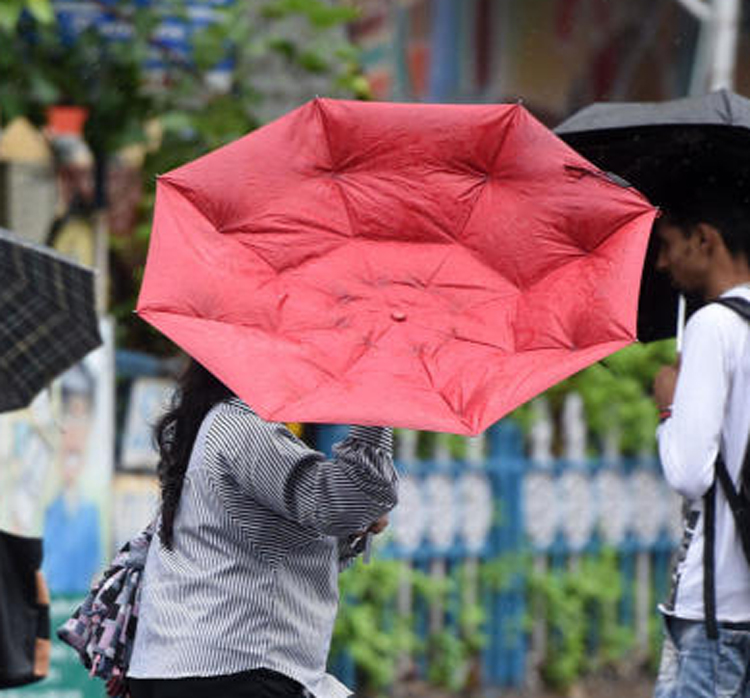 The monsoon this year has been a damp… er… a dry squib.

Since a delayed arrival on June 21, there has been only a little over 21mm of rain in Calcutta, making this June so far the driest the city has seen in at least five years.

From conference rooms to roadside tea stalls, almost everywhere people are expecting a spell of heavy rain. But the forecast is grim.

The remaining days of the month are unlikely to see sustained rainfall and the rain deficit for June — which stood at a whopping 61 per cent on Tuesday — is difficult to make up, a weather department official said.

A low-pressure system that can trigger rain is likely to form over the north Bay of Bengal but not before June 30, the official added.

A current trough of low pressure has shifted from south Bengal towards north, causing widespread rain in Darjeeling, Alipurduar and Jalpaiguri. Several rivers in these districts have flooded settlements on their banks.

Officials said the rain in north Bengal was likely to intensify over the next few days. In south Bengal, however, the monsoon currents are weak.

“The delayed arrival of the monsoon and the weak system that propelled the monsoon into south Bengal have led to the deficit. Deficits are not unusual but the scale (61 per cent) is rare,” said Sanjib Bandyopadhyay, deputy director, India Meteorological Department, Calcutta.

The monsoon had been making slow progress this year, before being further impeded by Cyclone Vayu in the second week of June. The cyclone, that formed over Arabian Sea and was tipped to make landfall in the Gujarat coast, ultimately fizzled out and turned into a depression. The storm sucked up loads of moisture during its journey, weakening the monsoon current. 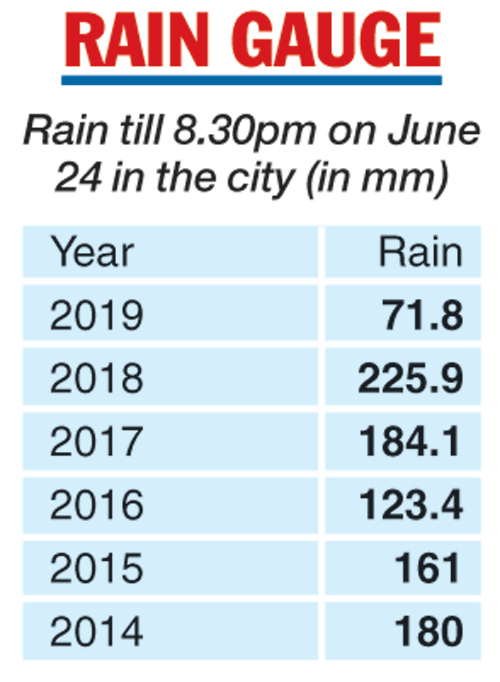 The monsoon arrived in south Bengal after a delay of 13 days, the most delayed arrival in at least a decade. Late arrival meant a dip in the number of rain days in June.

“It does not rain every day during the monsoon. On an average, there are around 13 days of rain between June 8 (normal arrival date) and June 30,” a Met official at Alipore said.

The monsoon came riding a meek low-pressure belt over the Bay of Bengal. As a result, the amount of rainfall it brought was negligible. The city had received only 2.9mm of rain on June 21 and 6.2mm the next day.

“The rainfall would have been more had the monsoon been brought by a stronger system, a deep depression or a depression,” the official said.

The monsoon had entered Calcutta riding a relatively weak flow of south-westerly winds in 2018 as well. But since it was only three days late, the city got several days of heavy rain in June, totalling 425.7mm. “This year, there is hardly any time left for the monsoon to make up for the June deficit,” the official said.

There is little chance of widespread rain in south Bengal over the next three days.

The humidity level is high but the absence of any low-pressure system in south Bengal is playing spoilsport.

“There is strong moisture incursion from the Bay of Bengal but there is no system to attract the moisture-laden winds. As a result, the winds are travelling unhindered to north Bengal, triggering heavy rain,” the Met official said.

North Bengal has seen incessant rain over the past 24 hours. Alipurduar alone has got 167mm. Heavy rain in Met parlance is anything between 60mm and 120mm over 24 hours. The downpour has led to a rise in the water levels of the Neora, Diana, Torsha, Jaldhaka and other rivers.

“Heavy to very rainfall (60-200mm) is likely in the districts of Coochbehar, Alipurduar, Jalpaiguri, Darjeeling and Kalimpong over the next couple of days,” the weather office has warned.