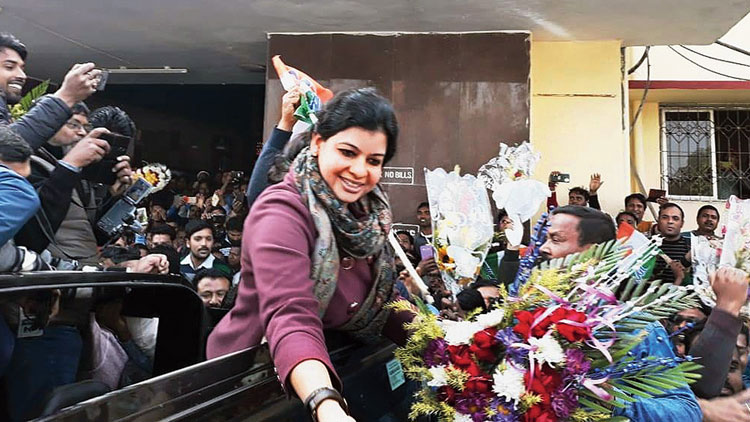 Discontent brewed in Trinamul over Tuesday’s selection of candidates — eight of them recent defectors and some others greenhorns — leaving sections of the leadership worried about its possible impact on the party’s Lok Sabha poll prospects.

“Eight recent defectors on the list of 42 make it nearly one out of every five. That has generated considerable bitterness,” a Trinamul leader said.

According to the Trinamul leader, another cause of heartburn is the decision to retain a few sitting MPs blamed for doing little in the past five years. An example cited is that of Arpita Ghosh, the Balurghat MP whom Trinamul leaders have publicly criticised.

“The selection of a Gorkha Janmukti Morcha leader (Amar Singh Rai) with the Trinamul symbol in Darjeeling was also not taken well by some sections,” said a Trinamul leader.

Responding to questions on her selections, Mamata said on Wednesday: “I had to strike a fine balance…Our list is unity in diversity. Everybody can’t be accommodated all the time. Those who want to look elsewhere over such trivialities are free to leave. I don’t care.”

In Cooch Behar, Partha Pratim Roy, the sitting MP and district youth wing chief, was denied a ticket over feud with the parent party. “Many in the youth wing are questioning the choice of a defector (Adhikary),” said a leader.

He counted Mausam, Hiten Burman, Arghya Roy Pradhan and Udayan Guha among north Bengal leaders who had defected earlier and gained in Trinamul at the cost of “loyal” party leaders.

Cooch Behar Trinamul chief and minister Rabindranath Ghosh said “the selections do not matter as long as the candidates fight on the Trinamul symbol”. “Adhikary will win by a record margin.”