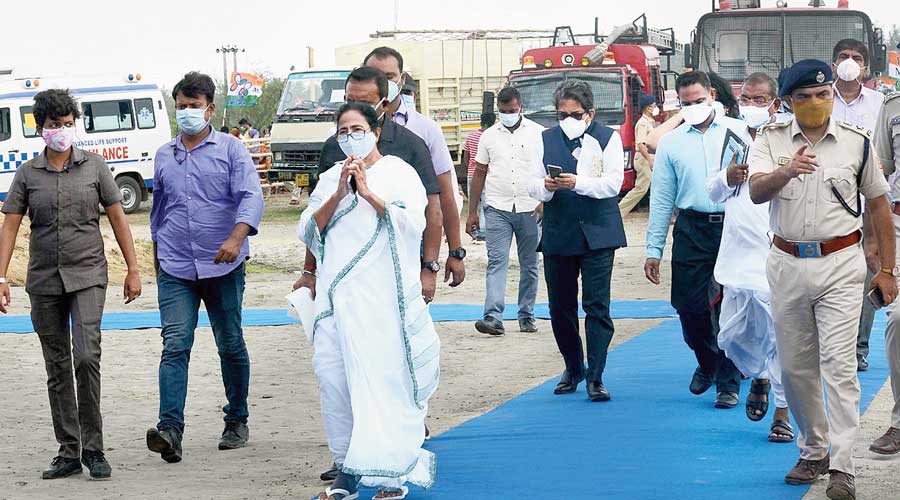 Mamata Banerjee skipped a meeting by Narendra Modi at the Kalaikunda air base on Friday to assess the devastation caused by Cyclone Yaas as she was apparently displeased with the review session being turned into a “political exercise” with the attendance of Nandigram BJP MLA Suvendu Adhikari.

But the Bengal chief minister met the Prime Minister and handed over to him the state government’s reports on the assessment of the damages.

Interpreted as a snub of the Prime Minister, Mamata’s absence from the review meeting prompted scores of BJP leaders at state and national levels to launch scathing attacks on her.

However, even as the BJP came out all guns blazing over Mamata’s gesture, a growing disquiet was palpable within the party’s Bengal unit itself over Adhikari’s attendance.

Sources in the state government said when Mamata had found out late on Thursday evening that Modi’s review meeting was supposed to include her former political protégé Adhikari, her objection was conveyed formally to the Prime Minister’s Office. The sources said Mamata had no objection to the likes of governor Jagdeep Dhankhar, Union minister Dharmendra Pradhan and Union minister of state Debasree Chaudhuri attending the meeting, which the chief minister was to attend, along with state chief secretary Alapan Bandyopadhyay.

“She was opposed to the attendance of Adhikari, in a clear indication of the meeting being turned into a political exercise by the BJP government at the Centre, which displeased her. Adhikari managed to win the Nandigram seat against her, though by the skin of his teeth, and is set to become the leader of the Opposition. But that does not qualify him to be an attendee at such a meeting,” said a source.

Early on Friday morning, the BJP state unit released to the media — without explanation or comment— a letter from Speaker Biman Banerjee of the Bengal Assembly, dated May 19, recognising Adhikari as the leader of the Opposition from May 13.

However, it did not seem to change Mamata’s mind. Also, in her multiple public interactions on Friday, not once did she mention the alleged Adhikari issue as the reason for her absence from Modi’s meeting.

On Friday morning, according to sources, chief secretary Bandyopadhyay coordinated with the PMO for a brief, separate meeting between

Modi and Mamata. Once clearance was received from the PMO, it was decided that Mamata and the chief secretary would go to Kalaikunda after the Sagar Island survey, meet Modi and then leave for Digha for a review meeting.

“However, when they reached Kalaikunda, the chief minister was asked to wait. She said she would like to meet the Prime Minister and had been asked to get there. She was told he was at a meeting and would not be able to see her before it ended. The chief minister said she only needed a minute. After that, she went in, along with the chief secretary,” said a Bengal minister.

According to him, she handed Modi a bunch of reports and other documents, saying they contained all necessary details of damages and losses and urged him to take a look before leaving the venue. Dhankhar, Chaudhuri and Adhikari were present at the time, said the state minister.

At her review meeting in Digha, Mamata said: “After an extensive survey of affected areas in South 24-Parganas, we went to Kalaikunda because the Prime Minister had convened a meeting. We did not know, we had a programme in Digha… despite that, we went to Kalaikunda and handed to him the detailed reports of our damages and losses, asking him to make sure he does what is best.” Mamata added that damage of Rs 20,000 crore had already been ascertained.

Additionally, she said the state government had asked for two packages of Rs 10,000 crore each, for the development of Digha and the Sundarbans, two areas that were devastated extensively by the cyclone and allied inundation.

“We will probably not get anything at all. But we gave it to the Prime Minister and told him that because he had wanted to meet me, I went from so far away, and after meeting him we are going to Digha, leaving with his permission,” said the chief minister.

Later in the afternoon, Modi issued a statement announcing a “financial assistance” of Rs 1,000 crore for immediate relief activities. However, Rs 500 crore would be immediately given to Odisha, while the remaining Rs 500 crore would be released “on the basis of the damage” — presumably by an inter-ministerial team that would be deployed by the Centre to visit the states to assess the extent of the damage — to Bengal and Jharkhand.

There was a barrage of attacks from the saffron echo chambers on social media, accusing Mamata of having insulted Modi, the Constitution, its federal structure, and even the rule of law of itself. But several state BJP leaders this newspaper spoke to said on the condition of anonymity that including Adhikari in Modi’s meeting was “avoidable” and “unnecessary”. Some of them even went to the extent of saying that such a conflict with Mamata should have been averted by dropping Adhikari from the meeting.

“There have been countless occasions when she (Mamata) has gone about inviting conflict with the Centre, out of sheer arrogance or conceit. But this time, it was different. She was not wrong,” said a senior Bengal office-bearer of the BJP. This leader pointed out that Congress veteran Abdul Mannan, then leader of the Opposition, had not been asked to join a similar exercise after Cyclone Amphan last year.

Multiple sources in the state BJP said the discontent was sensed by the saffron camp’s top tier, which quickly issued a notice to all its empanelled spokespersons, prohibiting them from speaking to journalists regarding the meeting.

While the gag on spokespersons in the state unit was on, national BJP leaders, including president J.P. Nadda, Union home minister Amit Shah and defence minister Rajnath Singh, started issuing statements of condemnation on Twitter. Soon after, similar tweets from state leaders — many of them the party’s candidates who got disastrously defeated in the election and practically not heard from since the results — started popping up on the microblogging site.

“Mamata Didi’s conduct today is an unfortunate low. Cyclone Yaas has affected several common citizens and the need of the hour is to assist those affected. Sadly, Didi has put arrogance above public welfare and today’s petty behaviour reflects that,” Shah tweeted.

Mamata Didi’s conduct today is an unfortunate low. Cyclone Yaas has affected several common citizens and the need of the hour is to assist those affected. Sadly, Didi has put arrogance above public welfare and today’s petty behaviour reflects that.

Nadda said in a tweet: “When Hon PM Shri @narendramodi stands strong with the citizens of West Bengal in the wake of cyclone Yaas, Mamata ji should set aside her ego for the welfare of people.” “Her absence from the PM’s meeting is murder of constitutional ethos & the culture of cooperative federalism,” the tweet added.

When Hon PM Shri @narendramodi stands strong with the citizens of West Bengal in wake of cyclone Yaas, Mamata ji should also set aside her ego for the welfare of people. Her absence from the PM’s meeting is murder of constitutional ethos & the culture of cooperative federalism.

The BJP’s stand against Mamata on Friday was in continuation of the party’s apparent strategy of relying largely on criticism on social and mainstream media, while doing little on the ground, for the masses, in a déjà vu of last May, in the wake of Cyclone Amphan amid the first wave of Covid-19.

Despite the thumping majority handed to Mamata by the people of Bengal for the third consecutive term, the BJP has apparently been relying on its relentless attack on her, hoping it would resonate with the majority at some point and yield political mileage.

“Most of our leaders are nowhere to be seen on the ground, which has been infuriating even the most dedicated party workers. Some people, like Dilip Ghosh, have now started venturing out. Others continue to confine themselves to the media, which the masses do not care about,” said a BJP state youth wing leader.

He pointed out that at a recent meeting of the youth wing, it was said that the BJP, being the largest Opposition party in Bengal, should set up a network of volunteers like the CPM’s youth and student wings — earning lavish praise, far and wide — to help the needy. The proposal remains ignored.

“The CPM has not won a single seat in the Assembly or in the Lok Sabha from Bengal. Despite that, even in the face of unimaginable odds such as a major paucity of funds and other resources, they have been doing amazing work for the masses…. Our party, with 70-plus MLAs, 18 MPs, and thousands of crores at its disposal, has only just started handing out some tarpaulins,” he added.