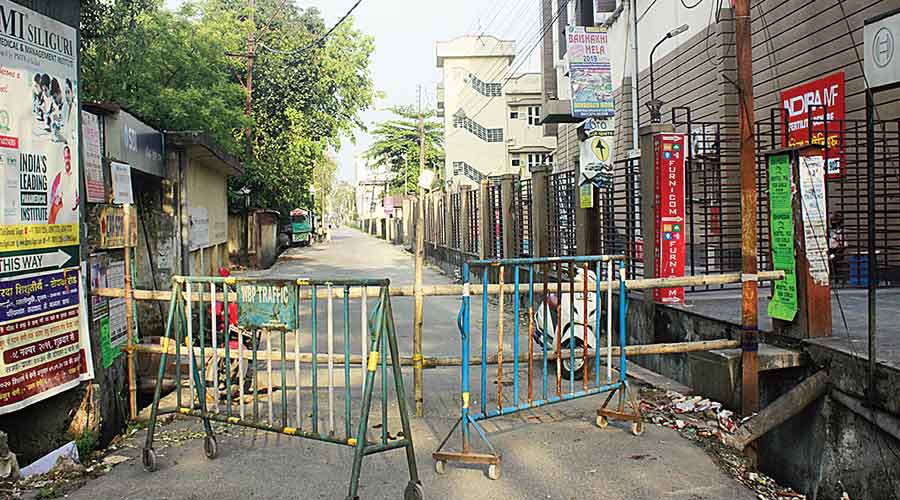 Darjeeling district authorities have notified 84 containment zones in the Siliguri subdivision, 54 of which are in the Siliguri town, because of rising coronavirus cases.

In Malda, where the number of Covid-19 cases reached close to 900, the administration decided to go in for strict lockdown in areas under three police stations.

“As of now, there are 214 smaller containment zones in Malda district where the lockdown will be enforced. We have marked six more such zones, which are larger in area. Apart from these areas, there will be lockdown at all localities (which are not marked as containment zones) under Englishbazar, Old Malda and Kaliachak police stations,” said an administrative official.

This lockdown will be for seven days, he said.

Covid-19 cases continued to increase in Malda also on Tuesday. The SDO of Malda Sadar tested positive for the pathogen.

Suresh Rano, the SDO, has been shifted to Calcutta for treatment. Six other policemen have also been diagnosed with Covid-19.So far, around 100 policemen have been found infected in Malda.

In a similar manner, there will be a 14 days’ lockdown in Dalkhola town of North Dinajpur. The decision was taken by the civic body on Monday.

On Tuesday, traders of Falakata in Alipurduar district, from where a number of cases were reported, decided to go into lockdown for five days from Wednesday. “We have informed the administration about the lockdown and have made public announcements,_ asking people to stay at home for next five days from July 8,” said Nantu Talukdar, the secretary of the Falakata Byabsayee Samity.

Alipurduar district has two containment zones, both in Birpara-Madarihat block, where the administration will enforce strict lockdown from Wednesday.

Covid-19 cases are increasing in Siliguri also. On Tuesday, Kajol Ghosh, a Trinamul leader and former leader of Opposition at the Siliguri Mahakuma Parishad, contracted the disease.