Mills told to start with 15% hands 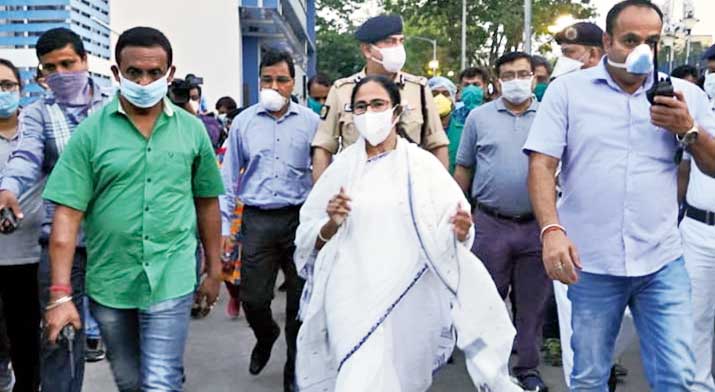 Bengal chief minister said on Wednesday that jute mills in the state could operate with 15 per cent of the workforce on a day the Union government tried its best to pursue Nabanna to reopen them to address the issue of scarcity of jute bags in the country.

“The Centre has asked us to allow jute mills to function. We are allowing all the mills to operate with 15 per cent workforce on alternate days,” Mamata Banerjee said.

For the past few days, Delhi has been prodding Nabanna into exempting the jute mills from the provisions of the lockdown.

Earlier on Wednesday, another letter from Capoor reached Sinha in which he urged Sinha to issue necessary orders so that 18 jute mills in Bengal could start immediate production of jute bags, following the new set of guidelines from the ministry of home affairs. The new guidelines allow jute mills to operate with “staggered shifts and social distancing”.

Sources at Nabanna said the union minister of textiles Smriti Irani had called up the chief minister, requesting her to intervene and open the jute mills. “I cannot be selective and allow only 18 mils to operate. All workers should get work,” Mamata said.

Owners said it was impossible to run the mills with such a meagre workforce. Several of them said they would rather keep the mills closed since it wasn’t viable to operate with such low staff strength

A section of employees — like security guards, sweepers and caretakers — have to be allowed inside the mill on every shift, said a mill owner. “All these people taken together will form the lion’s share of the 15 per cent that we are allowed to deploy... How will we then allow the workers who operate the looms?” asked a mill owner.

The Union ministry of textiles in the April 13 letter requested the state to allow mills to operate with 25 per cent staffing. According to many, that would have been better to start with.

“Maintaining the establishment comes at a cost. With the workforce reduced to 15 per cent, costs will increase. Since the price of jute bags is fixed, there will be no recovery either,” said Raghavendra Gupta, chairman of the Indian Jute Mills Association.

According to the mill owners, the state government’s stipulation of 15 per cent workforce will defeat the purpose of producing jute bags for packaging of food grains.

“Jute production is a continuous process. There is cutting, spinning, weaving and then bag making. There cannot be a break in the process. Even for maintaining social distancing as per health ministry guidelines, we need a minimum of 60-65 per cent of the workforce which is about 3,000 hands per mill,” said an IJMA member.

IJMA is working with Pricewaterhouse Coopers to develop a standard operating procedure for the mills while conforming to the ministry guidelines.

Trade unions accused Mamata of not addressing the important issue of mandatory payment of wages.

“It is alright that the mills are being reopened with a lesser strength. All the labours want to join work. But, it is still not clear whether the workers who won’t get to work will be paid or not,” said Anadi Sahu, state secretary of Citu. Trade unions have also demanded hygienic work environment and proper sanitisation for the labours.