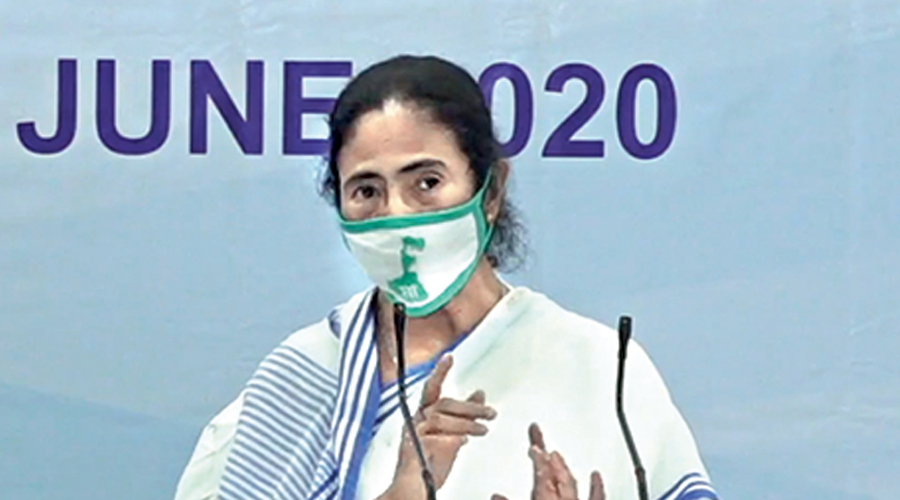 Chief minister Mamata Banerjee on Tuesday said her government would continue to supply free food grains to those who were not covered under the National Food Security Act (NFSA) in Bengal till June 2021.

The announcement has come minutes after Prime Minister Narendra Modi extended the Pradhan Mantri Garib Anna Yojana till November. The Centre had launched the scheme to provide additional 5kg of rice and 1kg of pulses or chickpeas monthly to all beneficiaries of the NFSA for April, May and June in the wake of the nationwide lockdown induced by Covid-19.

Sources at Nabanna said though modalities of the scheme’s extension till June next year were yet to be finalised, it appeared the state would also take responsibility of providing free grains to those covered under the NFSA if the Centre didn’t continue with the supply of free additional food items beyond November.

Out of around 10 crore ration-card holders in Bengal, around 6.01 crore come under the NFSA. Nearly 80 crore people are covered under the NFSA across the country.

“They (Centre) have said they will give 5kg (food grain) under the scheme… We are announcing our decision to extend our scheme to give free food grains till June next year,” the chief minister said soon after a cabinet meeting at Nabanna on Tuesday.

The Bengal government had earlier announced free rice of 5kg per person a month to nearly 3.98 crore people not covered under the central scheme. The state scheme was for six months from April through September.

“The state would ensure that there is no disparity among 10 crore ration card holders in Bengal. So, it is likely that those covered under the NFSA and those outside its purview would get free supply of food grains till next June,” said a senior official.

As the scheme has been extended till June next year, sources in the food and supplies department said the state was likely to shoulder an additional burden of nearly Rs 3,200 crore.

“When the scheme was announced in April for three months, it was estimated that a sum of Rs 1,400 crore would be required. Now, if the scheme is extended for seven more months — between September and June, 2021 — the state would require around Rs 3,200 crore extra,” said a senior official.

Sources said soon after the chief minister had announced the extension of the scheme on Tuesday, the food department prepared a proposal to the effect.

“The department is likely to put forward the proposal of extending the scheme till June next year on Thursday. Once Nabanna gives its approval, a required government order would be issued,” said a source.

Mamata did not make it clear whether the state would join the “one nation, one ration card” scheme which would have allowed a person to claim his allotment from any ration shop across the country. Some states have already joined the scheme by sharing details of the cardholders with the central server.

“Let me get to know about the scheme first and then only I can say something on this,” said the chief minister when asked whether the state would join the scheme.

Modi said in his address to the nation on Tuesday evening that some states were doing “good work” with regard to the “one nation, one ration card” scheme.