Taherpur: Only seat in CPM’s basket 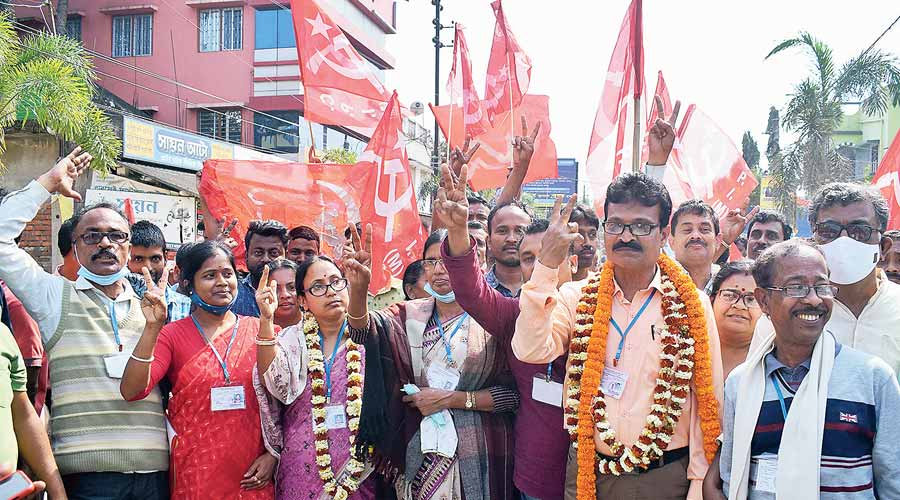 Jubilant CPM candidates of Taherpur, along with party supporters, outside a counting centre in Ranaghat on Wednesday
Telegraph picture
Subhasish Chaudhuri   |   Ranaghat   |   Published 03.03.22, 01:31 AM

Taherpur municipality in Nadia stood out on a day marked by Trinamul sweep as the 13-member strong civic body turned out to be one of the two places in the state where the ruling party had to taste defeat.

People in this small town of Nadia stood to repose their faith in CPM that helped the party retain power in the civic body by defeating the Trinamul Congress.

The CPM, which bagged eight seats, attributed the success to its “Taherpur model” of people's resistance against looting of votes by ruling party goons and the resentment exercised in EVMs by voters against the state government’s step-motherly attitude and non-cooperation with the CPM-run municipality even during the pandemic.

While the party managed to regiment people against looting of votes by forming booth-level groups of at least 150 supporters, at the same time it mobilised people against the Trinamul and the party-led government’s denial to basic amenities, said a CPM leader to explain how they managed to buck the trend of a landslide victory for the ruling party in the district and elsewhere.

“The result is the outcome of people’s resistance to protect their votes and at the same time their anger against the state government’s deprivation that is reflected in the EVMs. People knew how local Trinamul leadership prevented our outgoing board in every development initiative. They prevented construction of roads in several locations, conspired to deprive us of funds and even during the Covid situation it did not offer a single penny to run quarantine centres that it arranged to accommodate the migrant labourers,” said CPM’s Taherpur area committee secretary Supratip Roy.

“The only fault of the people was they voted for us in the last civic poll,” said Roy.

The CPM continues to have a influence on the town’s 18,564 voters, who consist mostly of migrant Hindus from Bangladesh. The migrant population that was rehabilitated in the town was provided unconditional land rights by the Left Front government during 80s.

As a result, the population, which belongs to the unorganised working class, has a strong leaning towards CPM.

The town declared a notified area in 1993 had its first civic poll in 1995, which the Left Front won. But, the support base of the Left weakened in 2010 when the Trinamul won. But CPM got control over the board in 2015.

The CPM leadership claimed that the working-class voters were angry as goons had prevented them from voting during the 2021 Assembly polls. “This had added to their anger over the state government’s non-cooperation during the pandemic. They had also witnessed how Red volunteers were harassed,” said Roy.

Trinamul insiders acknowledged that the CPM was able to mobilise these grievances in the EVMs and at the same time was successful in making people believe that their right to cast votes must be protected.

"We managed to thwart a bid to loot votes in at least 11 wards. In two wards we failed and lost. It included Ward-11 where our outgoing chairman Ratan Ranjan Roy lost," a CPM leader said.

While refuting allegations of attempts to loot votes, Trinamul's Nadia south organising committee chairman Bani Kumar Roy refused to accept that the CPM won because the people were angry with the alleged non-cooperation by the state government.