Airlines were issuing manual boarding passes to passengers who failed to do online check-in, resulting in the delay. 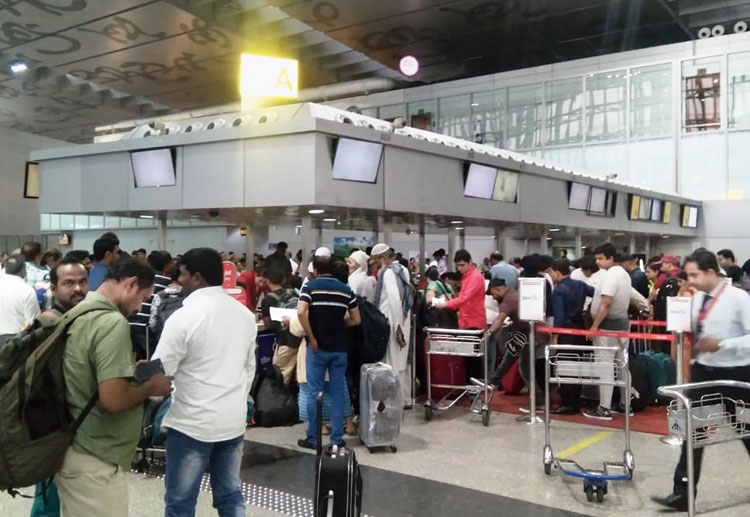 A fault in the core server of the city airport in the afternoon and a thunderstorm late on Monday evening disrupted flights, inconveniencing thousands of passengers, airport officials said.

The server fault, which was detected around 5.15pm and could not be fixed even late at night, led to delay in the departure of around 30 flights.

“One of the functions of the core server is to run the check-in system. Online check-in was disrupted and the flight information display boards went blank because of the snag,” an airport official said.

Airlines were issuing manual boarding passes to passengers who failed to do online check-in, resulting in the delay. Self check-in kiosks were dysfunctional, too. Many passengers had to wait for hours to get a boarding pass.

Some airlines said their evening flights were delayed by more than an hour.

“At first, the delays were between 25 minutes and half an hour. As the night progressed, the chaos intensified. Around 9pm, each flight was taking off an hour behind schedule,” the official said.

“The departure of nine IndiGo flights, which operates 54 per cent of the flights out of Calcutta, was delayed by an hour on an average.”

An official of a private airline said the delay was having a cascading effect on the entire network of the carrier.

“Some of the flights that take off from Calcutta in the evening operate on other routes, too. The server snag led to delay on those routes,” the official said.

The snag did not affect arrival of flights, the thunderstorm did. Airport officials said about a dozen aircraft had to hover over Calcutta for 50 minutes on an average before touching down because of lightning and strong winds.

A Singapore Airlines flight from Singapore was diverted to Dhaka.

“Flights were disrupted for 50 minutes because of the storm,” the airport official said.