When lockdown mixes with hate 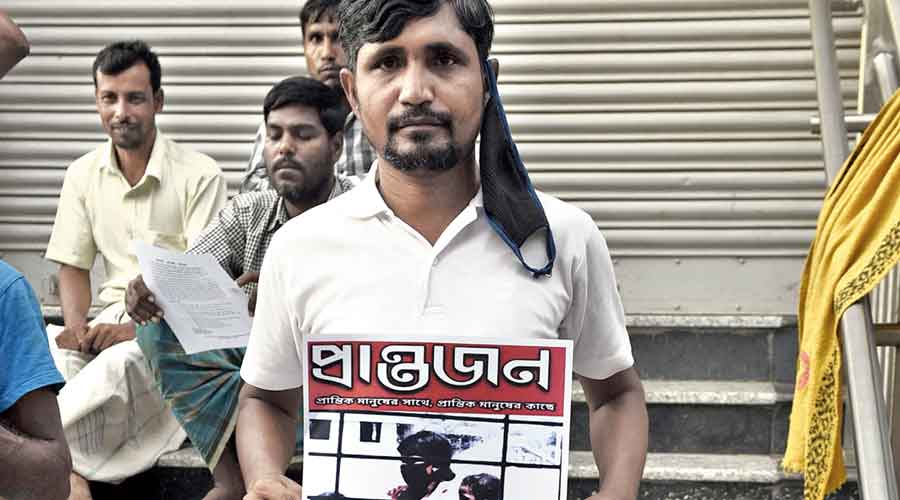 The lockdown and discrimination have struck up a nexus to undermine the right to livelihood.

“The trips have come down by half. We are stretching every limit to survive. On top of that, we are being discriminated against,” said Mansoor Ali, a driver.

Ali was among several people — many of them from the fringes of Calcutta — who had come to the city on Wednesday to assert their right to livelihood. The protesters had assembled at the stairs of the upcoming Phoolbagan Metro station.

Sandip Das, a farmer from Bhangar, sat on the stairs with a Bengali placard that read: “We grow the food that you Calcuttans eat. But our cry does not reach your ears.”

Many of them have lost their income because of the pandemic. Several told this newspaper they were also facing discrimination because of their religious identity.

At a time when the focus should be on generating income, the government in Delhi is busy with a divisive agenda, they added.

Ali, 34, who hails from Bhangar in South 24-Parganas, said he and his friends had had their vehicles stopped in districts like Birbhum and West Midnapore in the past few months.

A group had stopped his vehicle in Nalhati, Birbhum, because of a marker on his vehicle with which they identified his religion, Ali said. “I was pushed and abused,” recounted Ali, who lives with his wife, a son and a daughter.

Ali drove mini-trucks laden with sand and stone chips from the districts to New Town before the lockdown. He used to earn around Rs 8,000 a month. The trips have halved now, and he is no longer sure of ferrying the material without being intercepted on some pretext or the other.

Wednesday’s protest meeting at the Phoolbagan intersection was organised by a string of organisations that were at the forefront of the rallies against the new citizenship matrix.

The participants at Phoolbagan demanded jobs, release of political prisoners and repeal of the Citizenship Amendment Act, National Population Register and the National Register of Citizens.

Covid-19 had put the brakes on big protests in the city against the new citizenship regime but a series of “anti-people decisions” by the Centre “in the backdrop of a pandemic” have triggered a call to revive a movement against the Narendra Modi government.

“For most of December, January and February, we had marched to protest against the citizenship thrust. But in the past few months, the Modi government has inflicted so many more wounds,” said Manzar Jameel, one of the speakers. He cited the farm bills and labour bills.

Almost every speaker called out the Centre for using the pandemic to stifle dissent, citing the arrest of Umar Khalid and the NIA summons to scientist Parthasarathi Roy.

Some of the younger participants live-streamed the proceedings. The assembly was not big in terms of numbers but slogans like “Bhookmari se azadi (Freedom from hunger)” rang out after months.

Every time a speaker finished, the emcee disinfected the mic with a spray.

Sukhendu Sarkar, who teaches economics at a south Calcutta college, said the pandemic had made it clear that the BJP-RSS ecosystem’s strategy was an “all-out onslaught”.

“Enough of staying indoors. This is the start of the revival of the street protests and mass movement against the Modi regime,” said Soumya Sahin, an assistant professor at the National University of Juridical Sciences (NUJS) and one of the organisers of the meeting.