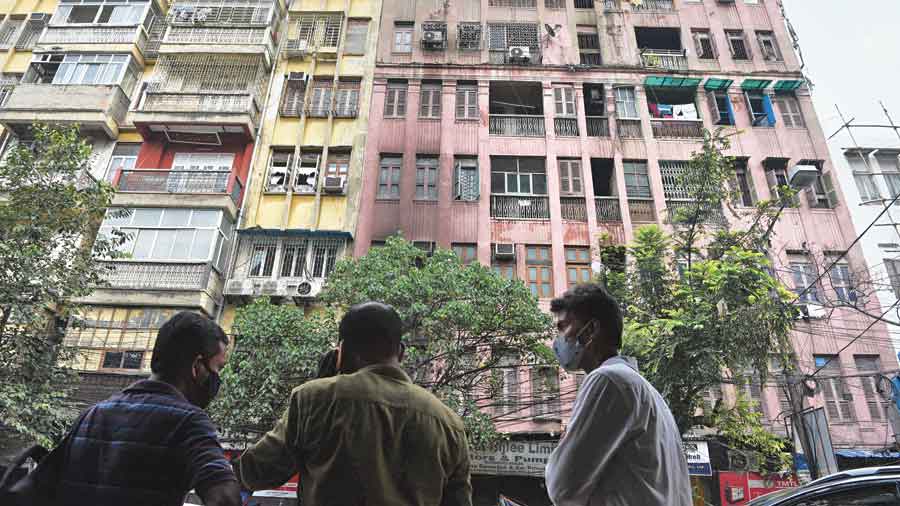 A 65-year-old woman and a 12-year-old boy were killed in a fire in a seven-storey building at 21 Ganesh Chandra Avenue on Friday night.

Twenty fire engines fought for more than six hours to bring the fire under control by dawn on Saturday.

The boy, Unais Rahaman, died when he slipped and fell off the rooftop. Samima Begum was found dead inside a toilet on the fifth floor of the building, Moon House, built in 1938.

Unais was taken to SSKM Hospital and then Belle Vue Clinic where doctors said he had died.

At least five other people, including two women sustained burns. Sanatan Behra, 50, and Anjan Barik, 56, have been admitted to the trauma care unit of SSKM.

Both are critical because of the extent of their burns, according to doctors at the hospital.

Samima Begum, several residents and eye-witnesses have said, had taken refuge inside the toilet after failing to climb a steep flight of steps to reach the rooftop where other residents were after the fire had broken out and the building was covered in black smoke.

Doctors at Calcutta Medical College and Hospital where she had been taken to said she had suffered an asphyxial death after struggling to breathe inside the smoke-filled toilet.

“The door to the rooftop was open or else more people would have possibly died,” a fire officer said while drawing parallel with the 2010 Stephen Court fire on Park Street, which had left 43 people dead.

The fire started from an electric meter box to the right of the building’s entrance which, some residents alleged, is cramped with empty packing boxes and rows of two-wheelers parked on one side at night.

Some 50-odd families who live in the building as tenants got to know of the fire around 10.20pm on Friday when thick smoke enveloped the building and cries of “aag (fire)” rang out in the air.

Once they realised the fire had started on the ground floor, they kept calling each other up and asking everyone to gather on the rooftop.

Manwar Khan said he was getting ready to go to sleep when he heard a commotion from his fifth-floor window on Ganesh Chandra Avenue below. His wife was in the bedroom and he in the drawing room. As he opened the windows to find out what the commotion was about, a gush of thick black smoke hit him on the face.

“The power had snapped and the lift wasn’t working. It was difficult to see through the smoke,” Wali Ahmed, another resident said. “The only option was to use the stairs. There were elderly people and children. It became difficult with every passing minute.”

With the flames leaping up and black smoke swirling around the night sky, several residents of the building adjoining Moon House found it difficult to breathe.

“It seemed something had exploded… when I opened my windows, there was smoke and fire outside,” Nadira Patherya, a resident of Premier House, the building adjacent Moon House, said.

Residents of Moon House who had gathered on the rooftop realised if they could reach the rooftop of the adjacent building they use the stairs to go down and out in the open. But a barbed wire fence came in the way.

“We finally managed to cut the fence and brought everyone to the rooftop of the adjacent building,” Gulzar, a resident who owns a computer shop on the ground floor of Moon House, said. 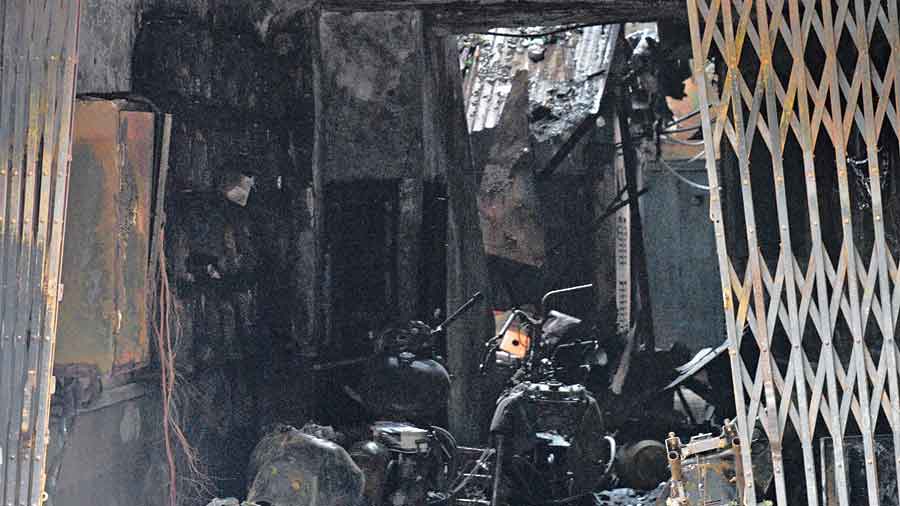 Firefighters said they had trouble accessing the building’s reservoir on the ground floor and that electric cables dangling at the entrance had posed a challenge.

“There were no means to fight the fire inside the building,” a fire officer said.

Police have started a case of negligence resulting in death against the owner who has told investigators another person was responsible for the building’s maintenance.

Residents alleged that repeated reminders to install new wires and keep the building safe from fire had fallen on deaf ears.

“We are waiting for the report of forensic experts,” a police officer said.