Green shoots of shopping ahead of Puja 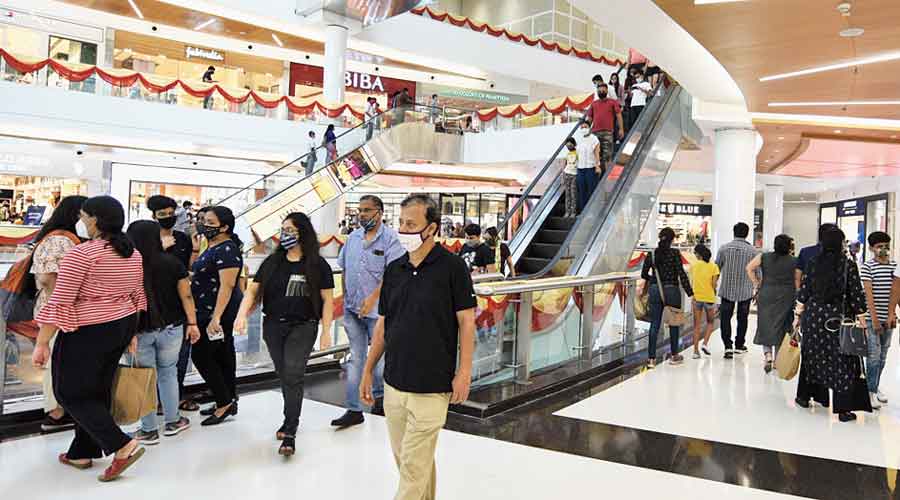 Shoppers thronged malls in numbers on Sunday with just three weekends to go before Durga Puja.

A steady stream of cars, two-wheelers and app cabs were seen entering City Centre in Salt Lake and South City Mall on Prince Anwar Shah Road since afternoon and crowds swelled further as evening set in. The managers of the malls and several stores said business was finally picking up after a long lull as many people have accepted that the coronavirus is here to stay and they have to live with it.

The Telegraph visited the two malls and caught the pulse of the Sunday shopathon.

For every six cars moving down Prince Anwar Shah Road, three were entering the mall. The mall’s parking lot, which can accommodate around 2,500 cars, was full by around 4.30pm.

Deep Biswas, the general manager of South City Mall, said footfall was steadily increasing with every passing weekend and things have been looking up since last week. He put Sunday’s footfall in excess of 35,000. The Friday count had been 20,000 and on Saturday, it crossed 25,000.

An employee of a denim outlet at the mall said there had been a marked increase in the number of buyers compared with the last month. “Sales are picking up. Last month, there were only a few people who bought garments but this weekend is promising,” he said.

The manager at a footwear store echoed him. “Earlier people would hesitate to try out accessories before buying them. The trend is reversing,” he said.

Priyanka Biswas said she and her daughter Sreeja needed to step out desperately and could not let Puja shopping take a backseat. “We decided to step out at any cost. We wore masks throughout, ate nothing, used a lot of hand sanitiser and shopped a few items. It felt heavenly,” said Biswas, a teacher at St Sebastian’s School.

The Salt Lake mall had people dropping in since afternoon. People were leaving soon after making purchases. The footfall in the Kund area, where visitors would hang out in the pre-Covid times, has gone down.

The restaurants at the mall, too, did brisk business.

Metro spotted a young couple from Salt Lake, Aparajita and Srinjoy Roy Chakraborty, shopping for clothes and accessories. “We suddenly realised that Puja is round the corner and hopped into our car. It feels good,” said Srinjoy.

Sukanta Mukherjee, the mall head, said the footfall had been rising over the last couple of weekends.

“We are expecting the tempo to pick up further. People are realising that they have to live with the virus and life has to go on,” he said.