Two 200-year-old trees in IIEST campus back on feet 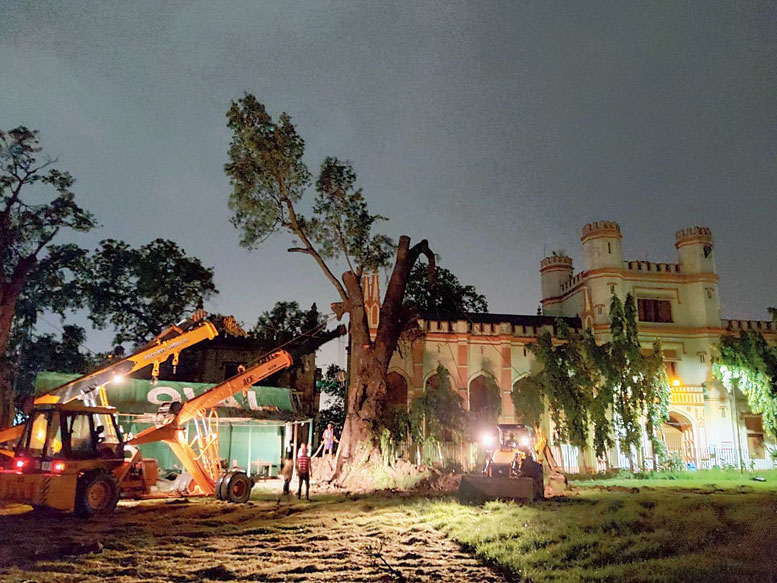 One of the two mahogany trees back on its feet on Friday evening. The two trees fell during Cyclone Amphan on May 20.
Pictures courtesy: IIEST
Subhankar Chowdhury   |   Calcutta   |   Published 28.06.20, 02:11 AM

Human hands and the heavy metal of a crane have together tried to undo nature’s doing on two 200-year-old trees on the western bank of the Hooghly.

On the IIEST Shibpur campus, two mahogany trees overlooking the Oval ground could not take the onslaught of Cyclone Amphan and fell. They were back on their feet on Friday evening.

The two trees were planted when land for the institute was allocated in 1820 by the Botanic Garden of India and Lord Hastings served as the Governor General. Calcutta was the crown jewel of the pink empire then.

Gusts of wind howling at over at 130km an hour had slammed Calcutta on May 20 — easily the fiercest storm in this neck of the woods in over a century.

Storms have always taken a heavy toll on trees in Calcutta but this year was exceptional. More than 15,000 trees fell. And the human response, too, was like never before. Hundreds of trees have been replanted in Calcutta and the neighbouring districts in the past few weeks in the most concerted effort to restore quickly some of the city’s ravaged green roof. 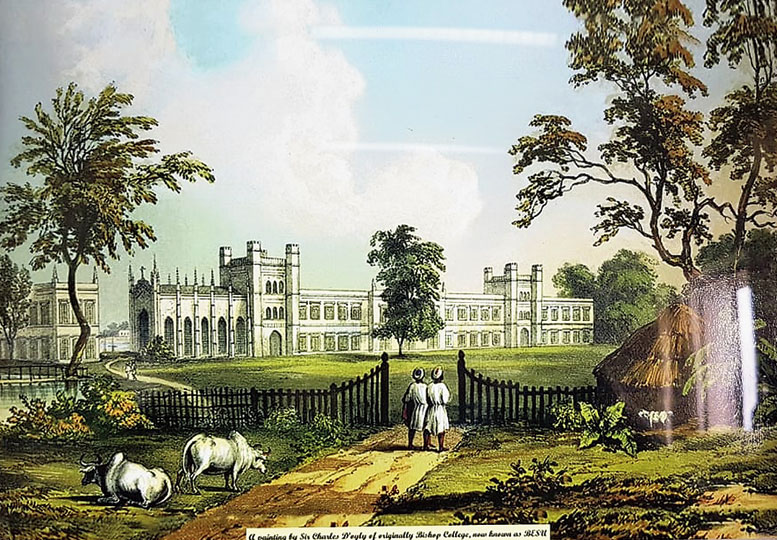 The Oval ground of the IIEST Shibpur campus in a 1848 painting of the then Bishop’s College by British artist Charles D’Oyly. The two mahogany trees, planted in 1820, on either side overlook the ground

A group of horticulturists took up the job on the verge of the Oval ground in Shibpur. Leaves are expected to sprout in full in a month’s time, given the rainy monsoon the city has had, they said on Saturday.

The destruction wreaked by the cyclone had “brought the attention back to the existence of the trees invaluable for their sheer history”, an IIEST official said.

The chapel of the college is about five metres from the two mahogany trees. History has it that (poet, reformer) Michael Madhusudan Dutt would spend countless hours tending to the trees. He loved nature. The chapel is now named Madhusudan Bhavan.

The two trees were witness to the series of events that led to the arrival of the college from the other bank of the Hooghly.

A professor at the institute said Calcutta Civil Engineering College, which was set up at Writers’ Buildings in 1856 after some years at the erstwhile Presidency College, landed on the present campus as The Government College, Howrah, in 1880. 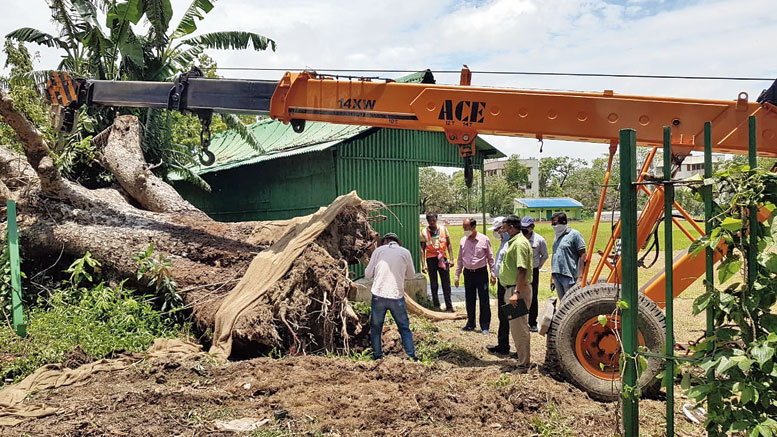 Bishop’s College shifted to Calcutta when the tech school crossed over.

The Botanic Garden authorities had allocated almost 21 acres on its southeast corner to the Society for the Propagation of Gospel. That land transfer led to the birth of Bishop’s College.

An IIEST official said Michael Madhsudan Dutt had joined the secular department of Bishop’s College in 1844 to learn Latin, Greek and Sanskrit.

“The East India Company had planted sal and teak trees apart from banyan, mahogany, walnut, peepal, gulmohar, and copper pot for ships that were then made of wood,” Bivore Das, an assistant registrar and a researcher on the history of the campus, said. “Since it was expensive to get wood from Rangoon, the trees were planted. The two trees are the oldest among the 16 mahogany varieties on the 121-acre campus. 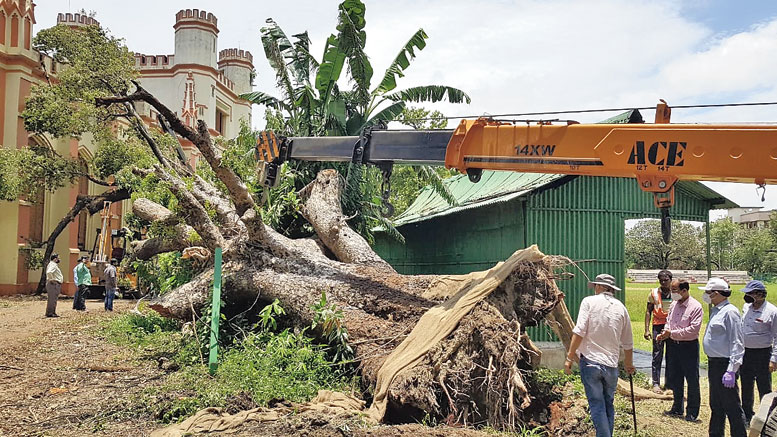 Sabyasachi Sengupta, a former registrar of the institute who had graduated from the government engineering college (the previous avatar of IIEST) in 1973, said he remembered the trees as they overlooked the Oval cricket ground, their favourite retreat outside the classroom.

“The ground was developed after the college came to the campus. I can still visualise the manual scoreboard set up at a spot between the two mahogany trees and the clubhouse during our cricket matches,” Sengupta, a former professor of IIT Kharagpur, said.

The ground was named the Oval by the British for its shape, just like its international counterpart at Kennington in South London.

“The two mahogany trees added to the majestic view of the ground. We are happy to restore them,” Parthasarathi Chakrabarti, the director of the institute, said.

Gajender Singh, one of the horticulturists said: “The monsoon has set in; the leaves are expected to come very soon.”

Time will tell if man has been able to restore what nature had almost taken away.