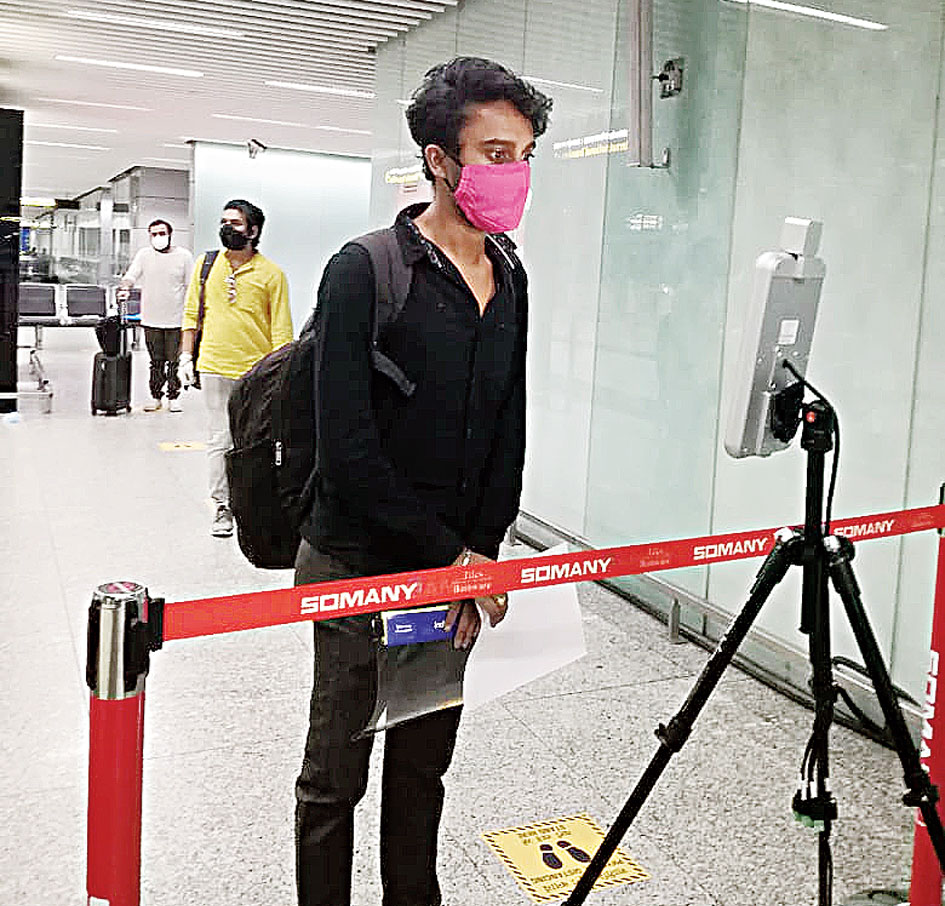 Domestic fliers arriving at the Calcutta airport now don’t have to stand in long queues to get their body temperature checked by hand-held devices or fill in a self-declaration form.

Thermal and optical imaging cameras to detect body temperature have been installed near three gates in the arrival area and outside one entrance at the departure level of the airport, officials said.

If the image is white, it would mean the person has temperature above normal. He or she will be taken to a hospital for a Covid-19 test or advised quarantine.

One camera has been installed for international arrival passengers before the immigration clearance.

The state government has installed the cameras and handed over to the airport authorities for maintenance.

Now, 60 domestic flights are arriving in Calcutta every day on an average with 9,000-odd passengers. Airport officials said initially there were long queues of passengers who needed to fill in the self-declaration form and also get their body temperature checked with a hand-held device.

It took about half an hour for a passenger to leave the airport after arrival because of the congestion. Airport officials said it was becoming difficult to ensure social distancing when so many passengers were queuing up.

“We had requested the state government to install thermal cameras which would help ease the congestion. Now, the passengers can just collect luggage from the conveyor belt and walk out of the terminal,” said airport director Kaushik Bhattacharya.

He said one camera was installed in the departure area as a pilot project to see whether it could be used at other gates. During departure, the passengers have to stand in queues to get their baggage sanitised, body temperature checked and then tickets and ID proof checked remotely through a camera.

“We have to see whether installing a camera can actually help reduce queue at the entry gate to the departure area, said Bhattacharya.

Similar cameras have been installed at other airports, including the ones in Hyderabad and Thiruvananthapuram, officials said.

At the Calcutta airport, arrival passengers no longer have to fill in a self-declaration form. “The passengers are already filling in the form online. Airlines are issuing the form during ticket booking. So, we had requested the state government to do away with the system of filling in the form at the airport after arrival,” director Bhattacharya said.

The new system kicked in on Monday.

“Apart from taking time, multiple touches were involved when a passenger was filling up the form,” he said.