Municipal Corporation has already appointed committee of specialists from Jadavpur University to examine the stability of those buildings in Durga Pithuri Lane: Firhad Hakim 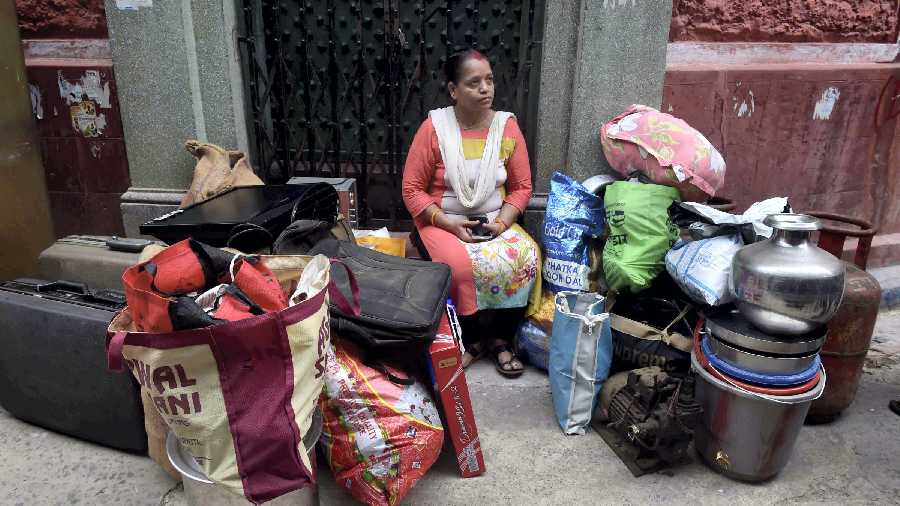 Resident waits with her belongings as she prepares to vacate her house after cracks appeared in the structures of the neighbourhood, likely to have been caused by metro railway construction in the area, at Bowbazar, in Calcutta
PTI picture
Our Bureau, PTI   |   Calcutta   |   Published 13.05.22, 04:49 PM

The Calcutta Metro Railway has been asked to test the soil condition in Bowbazar to decide the fate of the buildings that have developed major cracks, the city's mayor Firhad Hakim said on Friday.

The buildings cannot be razed suddenly without consulting experts and the Calcutta Municipal Corporation (CMC) has already appointed a committee of specialists from the Jadavpur University to examine the stability of those buildings in Durga Pithuri Lane, he said.

"Ours is a land composed of silt. We need to find the current situation in the earth and that is why we have asked the Metro Railway authorities to appoint earth experts to evaluate it," Hakim told PTI.

"They should see how much water has seeped into, which could be dangerous for the metro construction as well," he added.

It is not a good idea to rebuild the houses without proper soil testing, he said.

"We need reports from earth experts, because even if we rebuild the houses, they may not be intact for the next 50 years. These are old buildings, so even a small disturbance underneath causes damage to the structure," Hakim said.

At least 12 buildings in the congested central Calcutta locality have developed major cracks, following which 232 people were moved to different hotels.

Water entered the Howrah-bound under-construction tunnel of the East-West Metro from water pockets created due to the heavy rains. This resulted in the washing away of soil and sand, causing structural damage to the buildings, said a CMC engineer.

CMC building department engineers have already inspected the buildings, which have developed cracks, besides checking the condition of the neighbouring houses.

In August 2019, a tunnel boring machine hit an aquifer, leading to severe ground subsidence and collapse of several buildings in the same area.

Construction in the area was underway for the East-West Metro project, which will connect the twin cities of Howrah and Calcutta. The construction works were suspended following the incident.