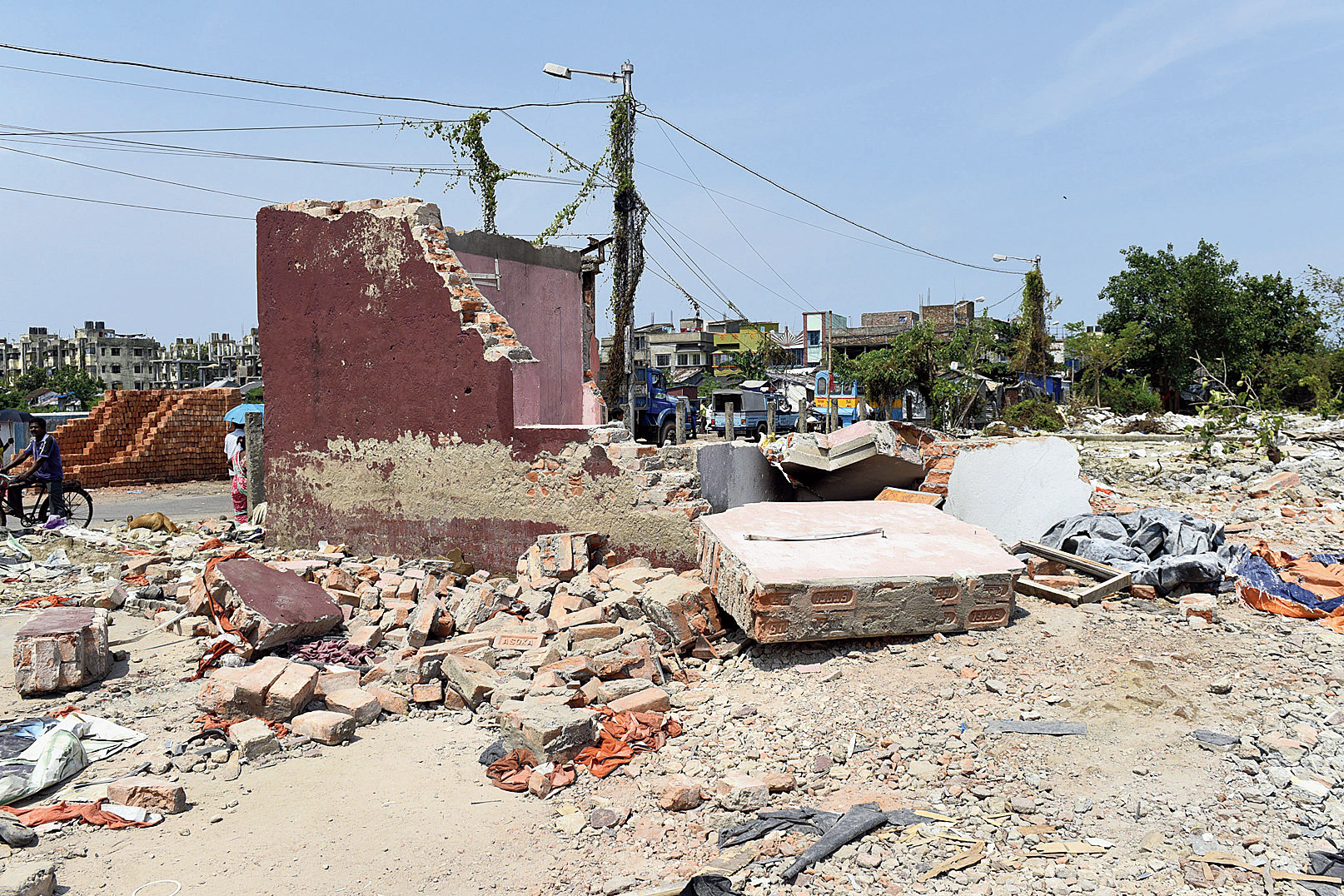 Debris of the office where a child (above) was crushed to death while the structure was being pulled down on Tuesday.
(Picture by Sanat Kr. Sinha)
Our Special Correspondent   |   Calcutta   |   Published 26.06.19, 08:34 PM

A four-year-old boy was crushed to death under the debris of a defunct office that was being pulled down in Nonadanga on Tuesday morning.

Angry neighbours held a protest, refusing to let police remove the body for around an hour.

The protesters alleged that the police had pushed and shoved them before taking away the body. But a police officer said they did not use any force.

The Calcutta Metropolitan Development Authority owns the land where the office and casting site were built.

Satrajit Sarder, 4, went to the site while playing with a cycle tube on Wednesday morning, when a payloader was pushing the wall to bring it down.

When neighbours got to know that the boy was buried under the debris, they allegedly started throwing stones at the payloader and also smashed the windows of an office room that was yet to be pulled down.

Satrajit was taken to the Calcutta National Medical College and Hospital, where he was declared dead on arrival.

Neighbours alleged there were not enough security personnel to guard the premises and stop anyone from entering.

“When casting was done at the site, outsiders could not enter. Now, anyone can go inside,” said Tuktuki Chakraborty, a resident of Nonadanga’s Bhai Bhai Colony.

When Metro visited the site on Wednesday afternoon, steel barricades were missing along a long stretch. Anyone could enter or exit easily. Even after the boy’s death, youths from the area were seen entering the site.

A resident of the colony admitted that people often went in to take steel, iron and other items left behind at the site.

“A lot of people assembled on the road in front of the site for an hour from 11.30am. We had to divert traffic through other roads,” a police officer.

A large police team reached the spot. “We didn’t use any force. We convinced them to move away from the road,” he said.

An official of HCC, the company that built Parama flyover, said the company had left the site about a couple of months ago.

“After the flyover was complete, we left the plot. Recently we sold the built-up area of the plot to a contractor, who was supposed to demolish the building and clear the site. We are no longer involved with the site,” said the official.

A police officer said the driver and helper of the payloader were arrested.

Neighbours said Satrajit’s father works as a truck helper and his mother is a homemaker. He was the second among three children.