No trust in official: Mukul Roy 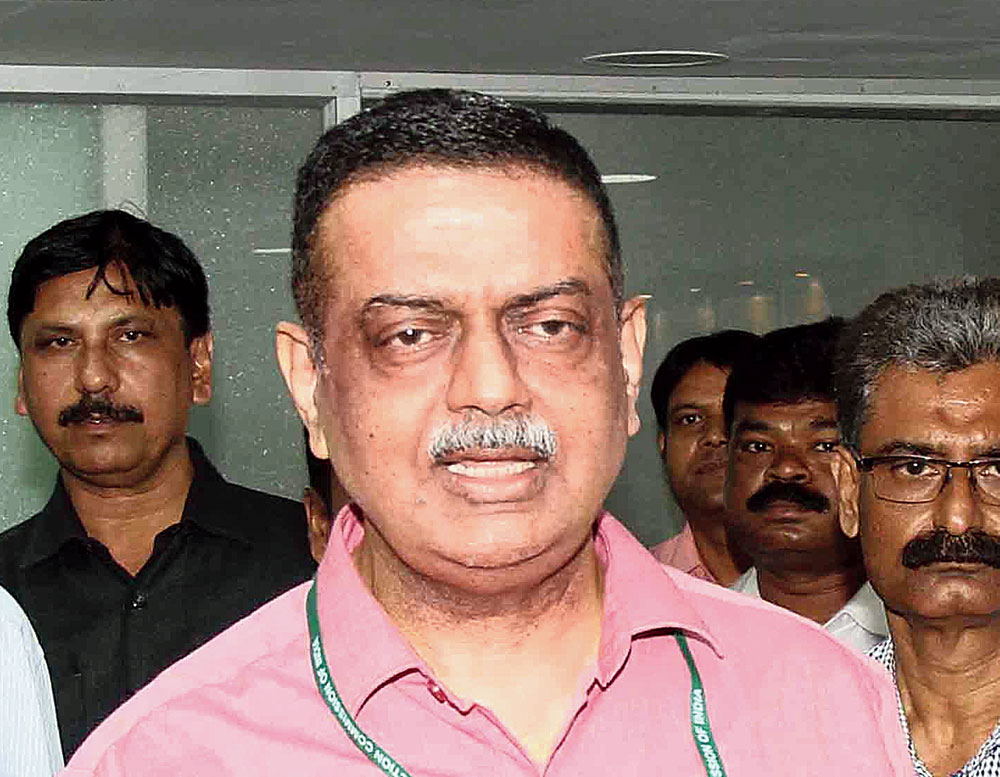 Bengal chief electoral officer Aariz Aftab was purportedly forced to sit out when a BJP delegation met special central police observer Vivek Dubey to take up with him the party’s concerns with regard to holding of the Lok Sabha polls in the state.

“We told him (Dubey) that we would not discuss anything in the presence of the CEO. Anything we say in his (Aftab’s) presence will be communicated to the ruling party and the state government in a matter of minutes,” said Mukul Roy who had led the BJP delegation.

“When we started complaining against the CEO at the meeting, he got up and left,” added Roy, the former Number Two of the Trinamul Congress.

The BJP leader said there was a common perception that Aftab was biased and partisan. “We have no confidence in him.”

Aftab could not be contacted independently to get his version as his cellphone was unreachable.

Sanjay Basu, an additional chief electoral officer, declined comment on the BJP’s claim that Aftab had to leave the meeting when the BJP had wanted a discussion without the CEO’s presence.

Sources in the Election Commission said CEOs usually remained present during such meetings. Aftab, however, did not sit out of Dubey’s meetings with delegations of other parties.

The BJP also raised the pitch for action against another set of senior officers, who were seen with chief minister Mamata Banerjee at the Metro Channel here on February 3.

At the meeting with Dubey, the BJP delegation asked why senior IPS officers Virendra, Gyanwant Singh, Vineet Goyal, Anuj Sharma and Rajeev Kumar should be allowed to occupy key posts with election-related duties, although they had been seen with Mamata at the “dharna” at the Metro Channel.

On the evening of February 3, Mamata had launched her 70-hour “Save Democracy Satyagraha” over a CBI team landing up at then Calcutta police commissioner Rajeev Kumar’s doorstep. In the photos submitted to Dubey by the BJP, the senior officers were seen occupying chairs next to Mamata by the Metro Channel pavement.

The BJP government at the Centre had condemned the IPS officers’ presence at the Metro Channel, although Mamata had said they were meeting her at the police outpost on the site from where she had been running the government.

“If retired former BSF director-general K.K. Sharma was replaced with Dubey as the observer because he had allegedly attended an RSS event once, why shouldn’t action be taken against these IPS officers for upholding the sanctity of the elections?” asked Roy.

“He (Dubey) gave us a patient hearing. Our concerns would be conveyed to the Nirvachan Sadan,” he added.

The Trinamul Congress — which complained to Dubey against BJP national president Amit Shah over his announcement at an Alipurduar rally on Friday that a National Register of Citizens exercise would be carried out in Bengal — refused to comment on the BJP’s allegations.

Sources in Trinamul, however, accused the BJP of trying to embarrass the ruling party and “insult” the officials and the government.

“This mud-slinging against the director-general of state police (Virendra), commissioner of Calcutta Police (Anuj Sharma) and even the chief electoral officer of the state is an extreme move,” said a Trinamul leader who didn’t want to be named.

In their meetings with Dubey, leaders of the CPM and the Congress also complained against the ruling party’s alleged attempts to vitiate the poll atmosphere in Bengal. Both parties demanded special measures to ensure free and fair elections.

Later in the day, asked about challenges in conducting elections in Bengal, Dubey said: “Political parties can make claims, but they will have to give evidence in support of their allegations.”