A section would be happy to see the two prominent Gorkha leaders talking to each other again, while others in both camps would be upset with the development 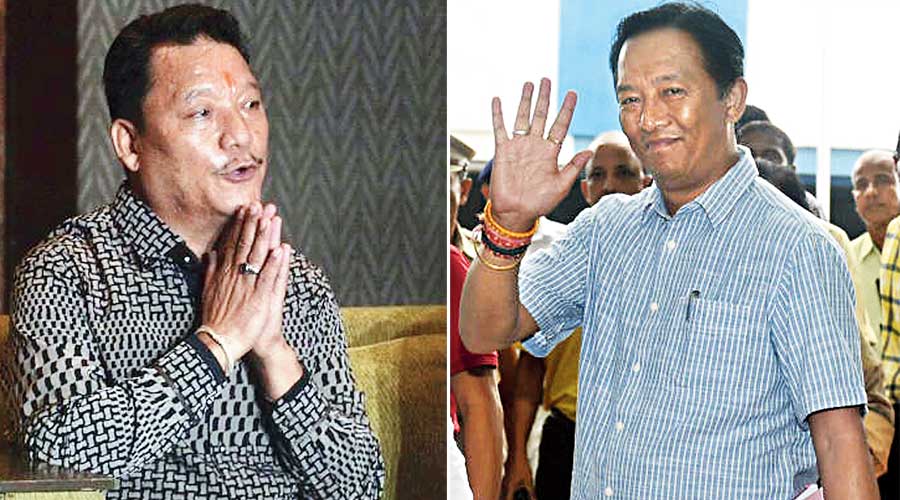 Bimal Gurung and Binay Tamang, two prominent Gorkha leaders, met each other on Wednesday evening after a gap of nearly four years in a clear sign of another realignment in the political landscape of the Darjeeling hills.

Tamang, accompanied by policemen travelling in pilot and escort cars, called on Gurung at Pattabong Guest House, about 7km from Darjeeling, and spent around an hour inside.

“I met the founder president (of the Gorkha Janmukti Morcha) Bimal Gurungji for about an hour and we discussed politics from 2007 to 2021 and issues we need to work on for the benefit of Gorkhas,” Tamang said after reaching his residence at Dali in Darjeeling late in the evening without revealing much.

Both Tamang and Gurung had refused to entertain the media, camping outside the gates of Pattabong Guest House, but the meeting triggered a lot of speculations among political observers in the hills.

In the middle of the 2017 Gorkhaland agitation, Tamang fell apart with Gurung and formed his own faction in the Morcha. Since then, Gurung had been on the run as several cases had been slapped on him in connection with the violent movement.

However, Gurung made a dramatic appearance in Calcutta last year and bought peace with the Bengal government and the Trinamul Congress.

In the past one month, the political contours in the hills changed rapidly with Tamang sending his resignation as the Morcha president to Gurung. Tamang’s close aide Anit Thapa was elected as the faction’s acting president also.

“There are signs of some political realignment in the hills... But we should not forget that Gurung, Tamang and Thapa are all with Trinamul now,” said an observer.

Tamang, who had recently held a “secret” meeting with his supporters in Siliguri, had told this newspaper that more than “forming a new party”, he would concentrate on focussing on three issues and “a major development” was due to take place within a “fortnight”.

The three issues that Tamang plans to work on are revision of Indo-Nepal Friendship Treaty, 1950, inclusion of the Darjeeling hills, Dooars and the Terai in the ambit of the Union ministry for the development of Northeast and establishment of an All India Gorkha Assembly.

Tamang wants the Centre to set up a Gorkha Assembly which will not be restricted by any geographic boundaries. But he proposes that its members be constituted through adult franchise in Gorkha-dominated areas across the country.

It was not clear whether Tamang spoke about those issues with Gurung during the meeting. There were no immediate reactions from the Anit Thapa camp but sources said they were not alarmed by the meeting.

“It just shows Binay Tamang’s desperation to be relevant in hill politics.... Just watch earlier videos where both Tamang and Gurung had attacked each other,” said a leader in the Thapa camp.

A section in the hills would be happy to see Gurung and Tamang talking to each other again, while some leaders in both the camps would be upset with the development.