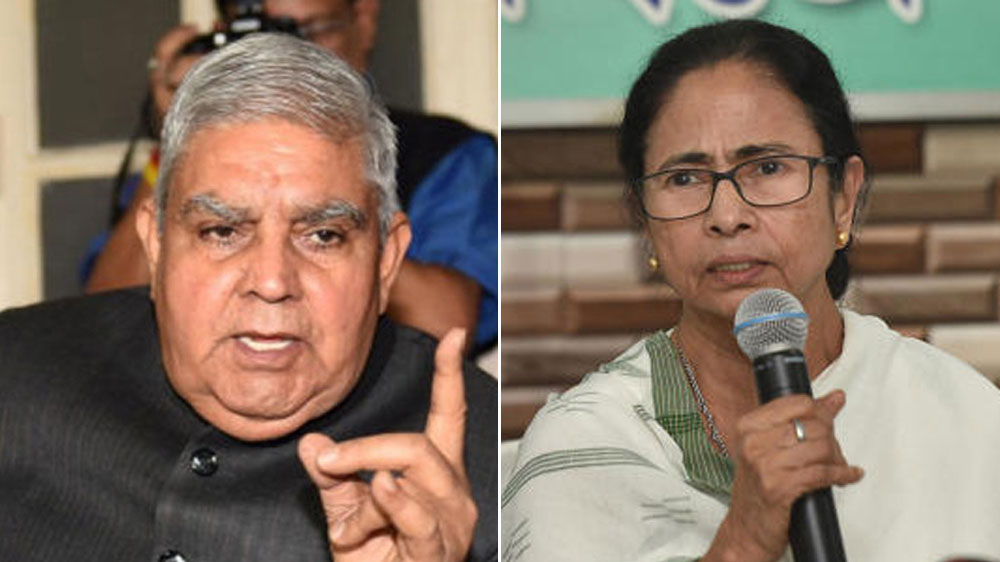 West Bengal Governor Jagdeep Dhankhar on Monday invoked Article 167 of the Constitution to seek from Chief Minister Mamata Banerjee all the records and proceedings that led to the issuance of a notification by the state government for setting up a commission of inquiry into alleged phone tapping using Pegasus software.

Article 167 of the Constitution deals with the duties of a chief minister about furnishing of information to the governor.

In a letter to Banerjee, he claimed that his opinion on the matter had not been sought, though the notification points to the formation of opinion by the governor .

"Constrained to invoke Article 167 of the Constitution to seek @MamataOfficial all record and proceedings leading to Inquiry Commission #Pegasus Notification dated 26.07.2021 as the Chief Secretary Hari Krishna Dwivedi @IASassociation failed to provide such information," Dhankhar tweeted.

Constrained to invoke Article 167 of the Constitution to seek @MamataOfficial all record and proceedings leading to Inquiry Commission #Pegasus Notification dated 26.07.2021 as the Chief Secretary Hari Krishna Dwivedi @IASassociation failed to provide such information. pic.twitter.com/Vp3BCyDv2Q

He also attached with it a copy of the letter to the chief minister.

"It emanates from the penultimate and last para of Notification dated 26.07.2021 that provisions of sub-sections (2) to (5) of Section 5A of the Commission of Inquiry Act, 1952 have been made applicable to the proceedings of Pegasus Inquiry Commission, premised on the 'opinion of the Governor'," Dhankhar said.

He pointed out that there has been no communication whatsoever on this count from her side to the governor before the promulgation of the notification,

"There has been none as a matter of fact," the governor said.

He wrote to the chief minister asking her to take steps to forward to him at the earliest the entire record leading to the issuance of the notification for forming the Justice Lokur and Justice Bhattacharya Commission of Inquiry, "adverting on all facets of formation of opinion by the Governor."

Expressing dismay at not being provided a copy of notification vide which the Mamata Banerjee government constituted the two-man commission of inquiry into alleged phone tapping using Pegasus software and connected proceedings, Dhankhar had last week called upon the state chief secretary to make it available to him by the evening of December 18.

Dhankhar said that invocation of Article 167 has become necessary as the chief secretary failed to provide information to him about the notification .

The Supreme Court had on December 17 stayed the ongoing inquiry into allegations of spying by the state government-appointed commission of inquiry.

The apex court had on October 27 appointed a three-member panel of cyber experts to probe the alleged use of Israeli spyware Pegasus for surveillance of certain people in India, saying every citizen needs protection against privacy violation and mere invocation of national security by the state does not render the court a mute spectator.

A massive political row erupted in July after media reports claimed that the Pegasus spyware was used to infiltrate phones and conduct surveillance on political leaders, government officials, and journalists across the country.

According to reports, TMC MP Abhishek Banerjee, a nephew of the West Bengal chief minister, and poll strategist Prashant Kishor were among the potential targets of the spyware during the assembly elections held earlier in the state.