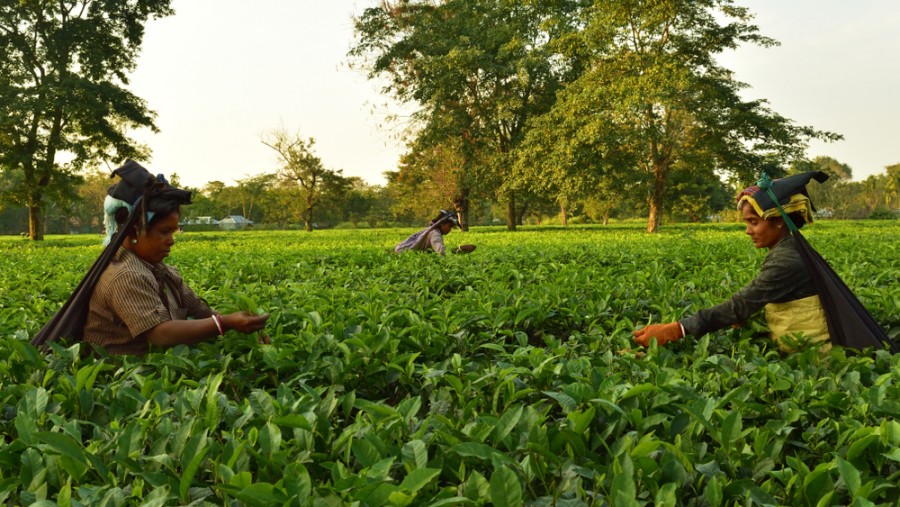 “Also, staff and the sub-staff serving in tea estates will get a hike of 15 per cent on gross salaries...The revised rates will be effective from January 1 this year,” said Ziaul Alam, convener of Joint Forum, an apex body of tea trade unions.
File picture
Avijit Sinha   |   Siliguri   |   Published 21.01.21, 02:13 AM

The state labour department has decided on an interim hike of 15 per cent in the daily wages of workers and monthly salaries of staff and sub-staff serving Bengal’s tea industry, which is likely to be a leverage for the ruling Trinamul in the brew belt before Assembly polls.

Tea workers, who now receive Rs 176 a day, will get a hike of Rs 26 that will increase the daily wage rate to Rs 202, sources said.

“Also, staff and the sub-staff serving in tea estates will get a hike of 15 per cent on gross salaries...The revised rates will be effective from January 1 this year,” said Ziaul Alam, convener of Joint Forum, an apex body of tea trade unions.

The decision, which will benefit close to three lakh workers and 10,000 staff and sub-staff, was taken at a tripartite meeting convened by the state labour department here on Wednesday in the presence of Bengal labour minister Moloy Ghatak, senior officials of his department, representatives of tea planters’ associations and tea trade unions.

Tea trade union leaders said that it was pointed out at the meeting that an interim hike was needed at once, as the dates of the Assembly polls could be declared any time. Once dates were declared, the model code of conduct would kick in and nothing could be done.

“That is why the state labour department took this step. They are also likely to issue the notification soon. We have, however, made it clear that talks for the final revision of salaries of the staff and sub-staff and for fixing the minimum daily wage for tea workers should continue,” said Saman Pathak, the Darjeeling district Citu secretary.

Tea planters said that they agreed to the hike but also flagged productivity issues at the meeting.

“It is necessary that the state takes initiative to address productivity issues. Rise in the cost of production vis-à-vis yield is a major concern in tea estates,” said Sumit Ghosh, secretary of the north Bengal branch of Tea Association of India.

The Mamata Banerjee government has already started the Cha Sundari housing scheme in the tea belt. However, the interim wage hike decision, political observers said, may help Trinamul steal a march on its political opponents, especially the BJP. In north Bengal, votes of tea workers and their families decide the results of at least 15 Assembly seats.

In neighbouring Assam — India’s largest tea producing state with the saffron party in power — the daily wage happens to be Rs 167 in the tea sector. Trinamul will surely highlight the Rs 35 difference in wages in Bengal and Assam, pointed out observers.

“In fact, the wage in Assam is even lower in places like the Barak valley,” said an observer. “But even if we consider Rs 167 (as the average) in Assam, Bengal’s current wage rate is Rs 9 higher, but after the interim hike comes in force, the difference will increase to Rs 35. This would surely prompt Trinamul to raise the issue during campaign to counter BJP,”

Like Bengal, Assam also faces elections in the first half of this year, with the BJP’s Sarbananda Sonowal government seeking a fresh term. Tea wage is a political issue there too.

“Assam Cha Mazdoor Sangh has recently launched the ‘Shramik Garjan’ (workers’ roar) campaign over wage revision,” said a political analyst. “In this context, the ACMS will surely mention the hike announced by the Bengal government. It will be interesting to see how the BJP government there handles the issue.”

The ACMS has demanded a daily wage of Rs 351 for tea workers in Assam, said sources.