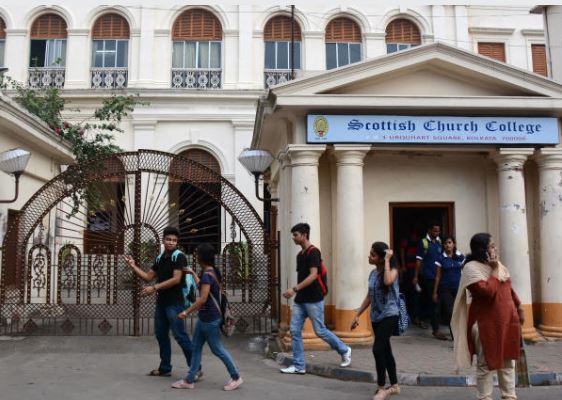 Humanity, secular, non-religious, aethism — these are some of the options city colleges are offering aspiring students while filling in admission forms.

Bethune College has added “humanity” as an option under religion in its admission form. Students applying to Scottish Church College can identify themselves as “secular” or “non-religious” and aspirants to the day section of Seth Anandran Jaipuria College can choose “atheism”.

Teachers at Bethune College said they had noticed students often write “humanism” or “non-believer” in the column for religion while filling in the university registration form.

“There are students who do not want to give importance to religion. We thought if there were other options available students might choose that over religion while filling in the form,” said Kamal Kanti Som, the convener of the admission committee at Bethune College.

The college, however, chose to offer “humanity” as an option instead of “non-believer”. “Everybody believes in humanism. It’s up to an applicant to decide how he or she wants to identify herself. An applicant is free to give her specific religious identity. Whatever option she chooses, it will have no bearing on selection,” said Bethune College principal Mamata Ray.

At the 189-year-old Scottish Church College, the decision to include “secular” and “non-religious” was taken while designing the admission form. “In the current scenario, it is important to impart to students a message of secularism. If students have a secular mindset, we will have peace in society,” principal Arpita Mukerji said.

In the common application form accepted by more than 800 colleges in the US, including Harvard University and Stanford University, the options offered in the religion column are agnostic, atheist, scientology, Unitarian, Universalist and none. Applicants to Nanyang Technological University in Singapore can also choose “free thinker.”

“Among the applicants we can have believers as well as non-believers. It is now up to the students how they want to identity themselves,” said Ashok Mukhopadhyay, the principal of Jaipuria college.

Jadavpur University does not require students to state their religious identity while filling in forms during admission. Students seeking scholarship, however, need to state if they belong to any minority community. “Merit should be the sole criterion for admission. That’s why we don’t want any details of the applicants’ religious identity,” said registrar Snehamanju Basu.