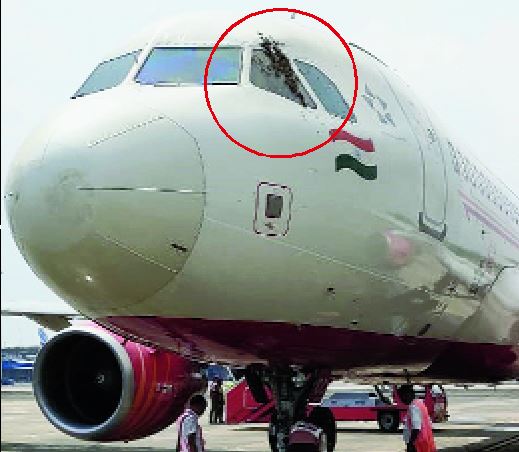 Honeybees descended on an Air India aircraft on Sunday morning, delaying the flight that had already returned twice from the runway following a snag.

The bees were detected when the plane’s cabin crew was trying to open the door to allow members of a delegation from Bangladesh to get off. The flight could take off after fire tenders dispersed the swarm by spraying water.

The swarm had settled on the left windscreen of the aircraft and the windows, said sources. Seeing the bees the crew decided against opening the aircraft’s door.

The Calcutta-Agartala flight (AI743), carrying 136 passengers, was scheduled to take off at 9.40am.

“There was a technical problem due to which the take off was delayed. Then the aircraft was stalled by bees. The fire services department was called and finally the aircraft could take off at 12.40pm,” said an Air India spokesperson.

Airport sources said the flight had taxied to the runway twice and returned because of the snag.

The 18-member Bangladeshi delegation — including information minister Hasan Mahmud and actress Rokeya Prachi — was on its way to the Tripura capital to attend a three-day film festival being organised by the Bangladesh government. The festival was to start this afternoon.

“Because of the delay we have requested the organisers to defer the inauguration,” Mahmud told Metro from onboard the flight.

Most members of the delegation were upset because they had to remain seated inside the aircraft for over three hours. Some complained the airline staff had kept them in the dark about the problem and handled the situation “unprofessionally”.

“Had the airline replaced the aircraft that developed snag, it would have been better,” said Mahmud.

Airport officials said some members of the delegation wanted to get off the aircraft and make other arrangements for their journey to Agartala. “The crew was trying to open the door to let them out when they noticed the bees,” an official said.

“There are no big trees in the vicinity. We are searching the hangars to find out if there is any beehive,” said airport director Kaushik Bhattacharya.