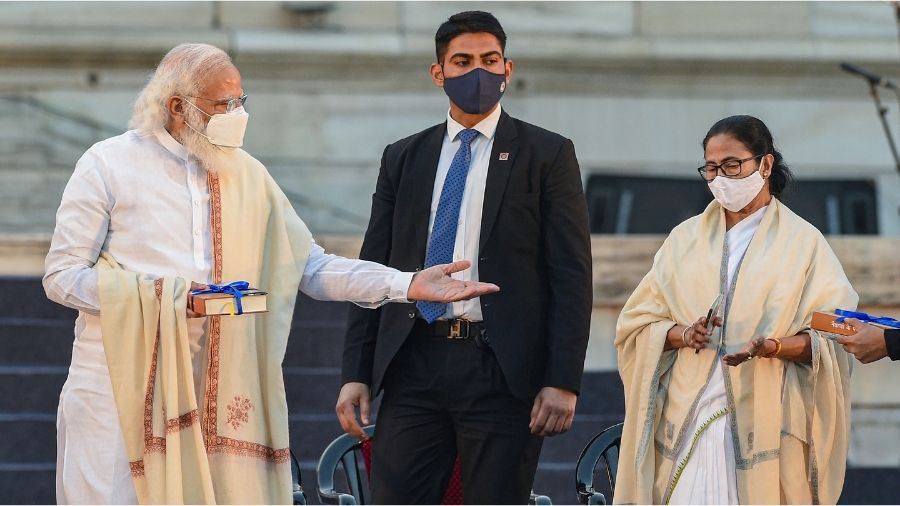 Bengal chief secretary Alapan Bandyopadhyay has been attached to the Centre, according to information that emerged after he and chief minister Mamata Banerjee skipped a cyclone review meeting Prime Minister Narendra Modi held at the Kalaikunda airbase on Friday.

Some officials viewed the “unprecedented” order that became public on Friday evening as an “act of revenge”.

Bandyopadhyay, who had never before been posted outside Bengal, must report to the department of personnel and training (DoPT) in Delhi by May 31, according to a communication from Anshuman Mishra, undersecretary to the central government.

The order said the cabinet appointments committee had approved placing Bandyopadhyay’s services with the Union government “as per provisions of Rule 6(1) of the Indian Administrative Service (Cadre) Rules, 1954”.

Bandyopadhyay, a 1987-batch IAS officer, was scheduled to retire on May 31 but received a three-month extension from the DoPT, the cadre-controlling authority for IAS officers, on a request from the state government.

The Bengal government had sought the extension for Bandyopadhyay to ensure continuity in the battle against Covid that the chief secretary has helmed for about a year.

“This is strange. The same central government that gave him an extension in view of the Covid situation now wants him to leave the state and report to Delhi, which means someone else would have to be appointed chief secretary. This is unprecedented,” a senior IAS officer said.

Several IAS officers said the order was prima facie “arbitrary” as it defied both logic and the normal procedures for such transfers.

The rule cited by the order requires the concurrence of the state government for a cadre officer to be deputed to the Centre.

“In this case, the state was not consulted and the order was issued unilaterally,” a senior official said.

He said the state government could well consider challenging the order in a court citing procedural shortcomings. “Besides, we are in the middle of a pandemic — how can the Centre issue such an arbitrary order?” the official said.

But some other officials said a provision in the rule gave the Centre sweeping powers over such transfers.

“A provision in the rule, which was inserted later, states that in case of any disagreement, the matter shall be decided by the central government and the state government must comply,” a bureaucrat said.

Several officials in Bengal said the Centre’s order appeared “an act of revenge” on Bandyopadhyay for failing to attend the Prime Minister’s meeting.

Modi, who visited cyclone-hit Odisha on Friday, had stopped over at Kalaikunda, West Midnapore, to review the devastation caused by Cyclone Yaas.

Sources said Mamata had handed over reports of the cyclone’s ravages to Modi but did not stay for the meeting as she felt it had turned into a political exercise with the inclusion of the BJP’s Nandigram MLA, Suvendu Adhikari.

“So, holding the chief secretary responsible is not fair,” he added.