Raising a toast to neighbours who made a mark this year Claim to fame: Finished seventh in the national level sport climbing tournament held in Delhi in April. The 16-year-old is a Class X student of Sri Aurobindo Institute of Education and has been training at the sport at Salt Lake stadium since he was in Class V. In November 2018, he represented India at the Asian Youth Championship in China and finished among the top 20.

“India is at par with the standard of climbers on the international level but the level of competition there is high. People win or lose in a fraction of a second,” says Rudrangsho. The sport entails climbing 15m high “walls” with varied levels of difficulty. Rudrangsho will be appearing for his ICSEs this year but is also hoping to represent east India in the nationals in 2020. “My parents are very supportive,” he says. “It was they who encouraged me to take up this sport in the first place.” 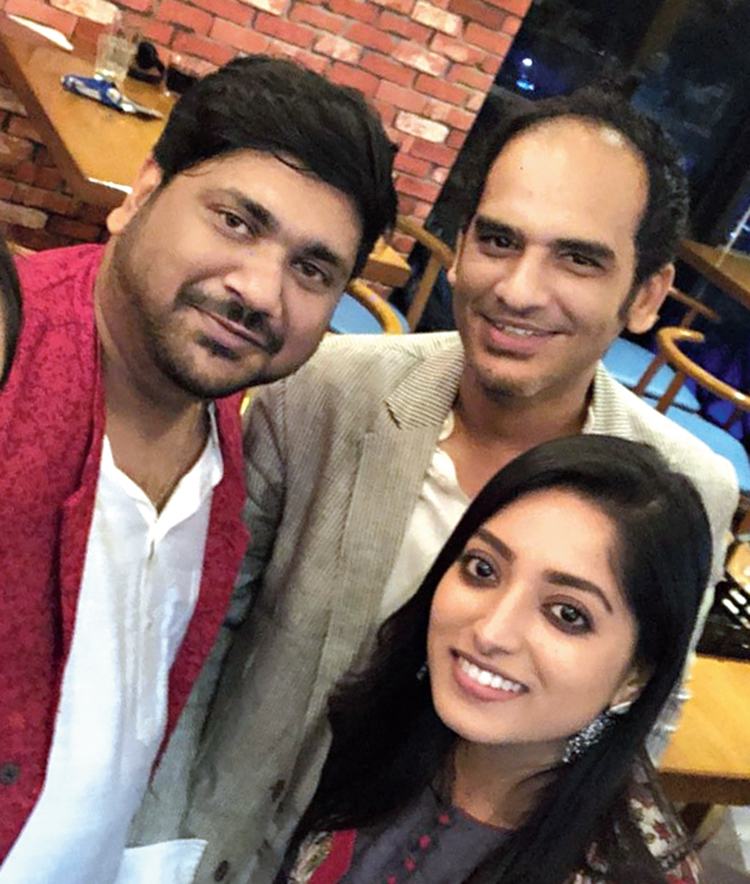 Backdrop: Vik is a Salt Lake School boy who used to live in AC Block before moving to EC six years ago. He worked in the marketing wings of media houses for a few years before quitting and taking up films.

“I took a break and watched three films a day. I took online courses and read biographies of great directors. I realised that more than technical knowhow, film making is about passion,” Vik says.

He began making corporate films and then took the plunge into Tollywood, writing, directing and co-producing Buro Sadhu. “It’s an uphill task for newcomers, from finding producers to finance your film to getting movie halls to screen them at prime slots. No one wants to risk doing business with unknown names. Moreover, mine was a thriller in an age when family dramas are ruling the roost,” says Vik, who had no trouble winning the lead actors’ trust. “They all loved the concept and came aboard. I’m also grateful to have an established editor like Arghyakamal Mitra (a resident of AE Block) snip the film for us.”

Vik is delighted with the response to the film and is planning another one on the India-Bangladesh theme and a web series. Neighbours have started recognising him too. “The other day I was buying vegetables at EC Market when a neighbour interrupted to tell the vendor to give me good ones as I was on my way to becoming a big shot!” he laughs. 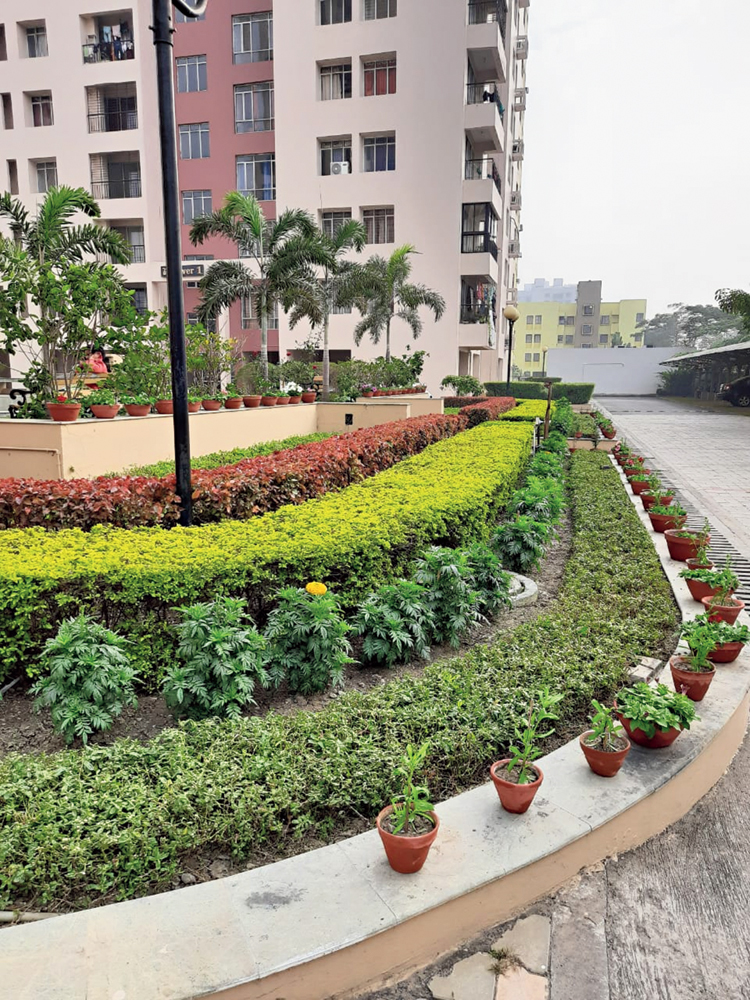 The Mallika Malancha Housing Complex
Sourced by The Telegraph

Claim to fame: Won second place in the “Green Initiatives” category of Rise High Awards 2019. This is an international inter-housing complex competition conducted by ADDA, a multinational software company that helps apartment owners and tenants make payments, communicate and manage dealings. The competition had received over 120 entries from across India, Singapore and Dubai. Results came out on November 9.

The complex won the prize because of their plantation drives that focussed on beautification and sustainable development. “The evaluation period was the three years that residents got the flats handed over from the builders and we had to send them photos and write-ups with our application,” says Bidyut Sarkar, who was vice-president of the residents’ association at the time of application. He has been in the US for the past year and co-ordinated with Saikat Biswas, who was then president, and stationed in New Town. “We had applied in 2017 too but failed to make the cut then,” Sarkar added.

The complex had rudimentary greenery initially but has developed a herbal garden with basils, thankuni etc, a paradise garden with birds of paradise plants, a tropical fruit garden with mangoes, litchis etc and an aroma garden where the wind blowing from the south eastern side carries the fragrance of the Himalayan Michelia flowers to their adda zone. “We planted trees that do not need much water and also planted bottle palms to prevent soil erosion from the canal next to it. 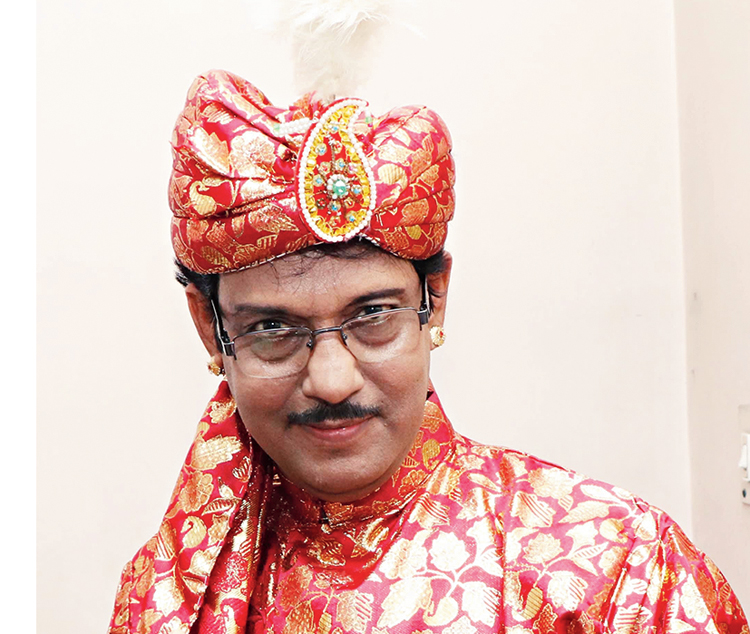 Shyamal Kumar
Sourced by The Telegraph

Claim to fame: The magician received the Order of Merlin Shield from the International Brotherhood of Magicians, USA. The award is presented to select magicians with over 35 years of continuous experience and association with the body.

The award ceremony was in July but due to a visa problem Kumar could not fly over to receive it himself. “The award was sent by post later,” says Kumar, who is also a civil engineer.

Kumar has been mesmerised by magicians since childhood. He would emulate PC Sorcar, read his magic workbooks and present the tricks mentioned in them to the master himself. “My first stage was my bed, with friends and relatives seated below,” he says.

Since then, he has performed around the country — at museums, hospitals, conducted workshops for kids live, on TV, for newspapers and even teaches magic at G.D. Birla Centre For Education.

“It was my privilege to play a magician in the king’s court in the 1992 Sandip Ray film Goopy Bagha Phire Elo,” he says. “Besides, Salt Lake itself has a vibrant environment for magic. I perform at pandals here on every day of the Pujas, besides birthday parties and family get-togethers,” says the chairman of the Society of Amateur Magicians.

Children, he says, love live animals at shows and his signature tricks include a trained pigeon. For millennials, he also has new-age tricks, where he unlocks their mobile phones without touching the devices etc. 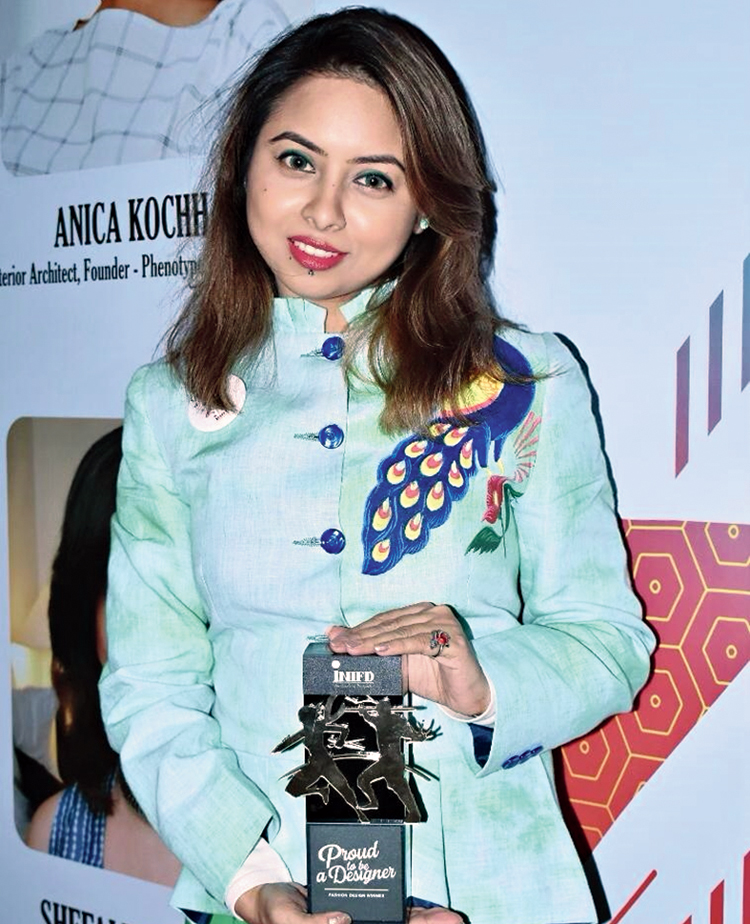 Claim to fame: The fashion designing student will get a direct entry to Lakme Fashion Week, to be held in Mumbai in February, after winning the east zone contest of iNIFD Launchpad during Lakme Fashion Week held in Bhubaneswar on December 18.

Backdrop: Rupa is a Bangladeshi studying Masters in Fashion Designing from International Institute of Fashion Design (iNIFD Saltlake). “I did my Bachelors in Dhaka but while the education there is good, I wasn’t getting the exposure of fashion shows so I moved to India,” says the girl who stays in a rented flat in BB Block.

The theme for the contest was Summer Resort 2020 and for her collection Rupa went for western dresses but with motifs inspired by the bright artwork on rickshaws back in her country. “I called it Rickshaw Rongbahari” she says. “Bangladesh is the rickshaw capital of the world and the vehicles there are adorned with dazzling artwork. I picked up motifs like peacocks, roosters and flowers. To control the traffic situation back home, rickshaws are now getting restricted to pockets. This is rendering the artists unemployed. My message was that these artistes can now shift to textile designing.”

Rupa is over the moon at being called to the Lakme Fashion Week, especially since she’ll get a chance to meet top designers. “Every girl in Bangladesh dreams of getting married in a Manish Malhotra lehenga,” laughs the girl who is married but who wore her own creation at the ceremony. “I’ve met Manish sir once when he came to our Salt Lake campus but want to meet him again. In fact, I want to work for him.”

Salt Lake, she says, is just like home. “People are warm, the culture is the same and almost everyone I meet says their ancestors are from Bangladesh,” she smiles. “When I came to India, I had first thought of studying in Bangalore but I loved the ambience of Salt Lake and our campus so much that I stayed back.” 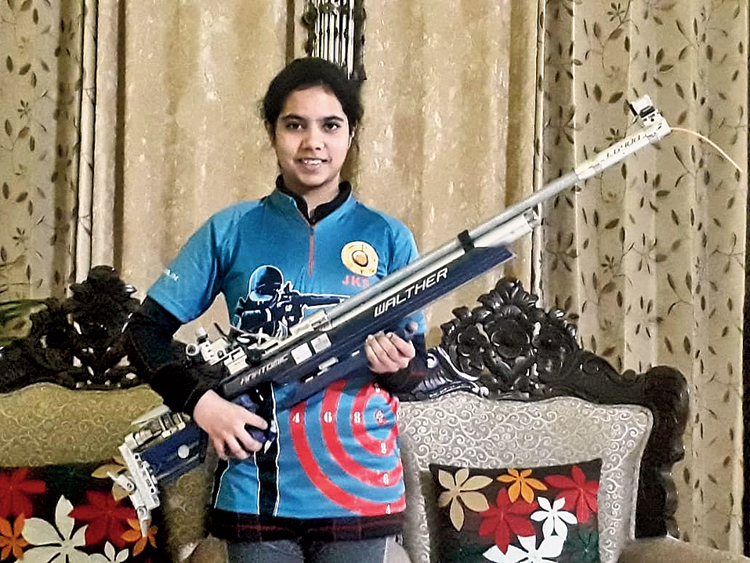 Suhani Rane
Sourced by The Telegraph

Backdrop: Daughter of an Army man now posted in Nagaland, Suhani picked up the rifle when a range opened in Jhansi where her father was posted. Suhani was 11 then. Afterwards, she enrolled in shooting academies in Mumbai and Jodhpur in her father’s footsteps. Her parents invested in a personal rifle for her where they were in Jodhpur. “But we shifted to Calcutta when we heard of Joydeep Karmakar Shooting Academy. It is here that she has really picked up the sport,” says mother Deepa.

Suhani shot 623 in Bhopal, sailing way over the minimum qualification score (MQS) of 609 for Seniors. It was such a close fight that she lost a medal by 0.1 point. “She had qualified last year for India trials for Youth and Junior age groups (for which MQS is 595 and 606 respectively). This time she qualified for all three groups,” her mother said.

Suhani now practises five days a week at the academy. The Class IX student of Narayana School likes sprint and singing too but shooting is her first love. At the trials, she will have to compete with stars like Apurvi Chandela, Elavenil Valarivan, Anjum Moudgil and, of course, Mehuli Ghosh from her own backyard. “I am both scared and excited to have come upto this level. I watch Mehulididi train and try to learn how she takes position and rectify my mistakes. All I want to do is produce a good score,” says the 13-year-old. 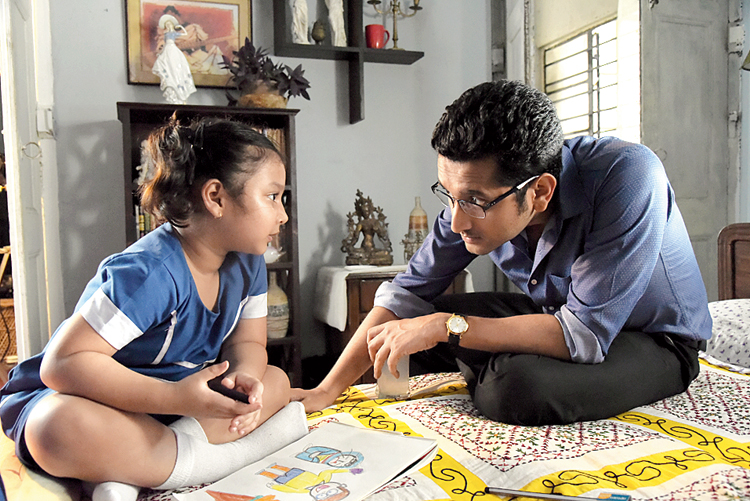 Claim to fame: Acted as Parambrata Chatterjee’s daughter in the film Sraboner Dhara, also starring Soumitra Chatterjee and Gargee Roychowdhury, that is set to be released on February 7, 2020. When the film was shot in 2017, Rose was four years old. It has already been screened at several film festivals across the world including International Film Festival of South Asia, Toronto and the recently held Kolkata International Film Festival.

Backdrop: Rose’s first brush with the camera was for a Zee Bangla film in early 2017 where she played granddaughter to Sudeshna Roy, informs mother Sanchari, who runs Payel Dance Academy. Though there were no dialogues, the role included a dance sequence, which fitted Rose’s profile as she is training in kathak.

A few months later, Rose got a call from Roy for Sraboner Dhara. “There was a scene where she would have to paint. We asked her who her favourite cartoon character was. When she said Doraemon, we wrote the scene around it,” said Roy.

“Parambrata became so friendly with her and Abhijit Guha (the film’s joint director) guided her so beautifully that her scenes were okayed in one take. She had six days of work, including dubbing. As her scenes were shot in the weekends she did not have to miss school (Our Lady Queen of the Missions),” says Sanchari.

Acting, Rose feels, was “easy”. “Parambrata uncle asked me what I was colouring. I told him about Doraemon and Nobita. In another scene, I got lost and Basabdatta (Chatterjee) auntie came looking for me,” said the six-year-old Shah Rukh Khan fan.

The tough part is convincing her friends. “They are not believing that I have acted in a film. If I get tickets I will take all of them to the hall to show them,” Rose says.

“The child was a delight to work with. She was very spontaneous. Once we explained the scene to her, she did it her own way,” said Roy.

Rose is now bent on a career in films. 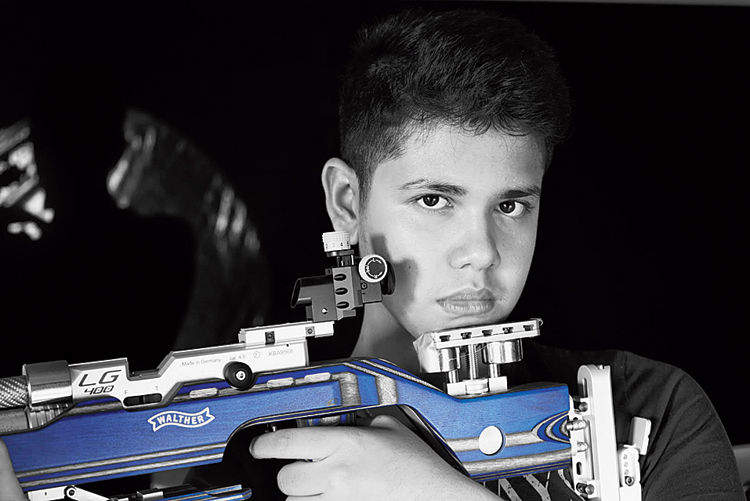 Adriyan Karmakar
Sourced by The Telegraph

Claim to fame: Has qualified for the Senior India camp trial in 10m air rifle.

“This is my personal best,” said Adriyan, who appeared for his fourth successive NSCC this year. When he competed first in 2016, he was then the youngest to compete in the nationals, at 10. He has since been overtaken by Abhinav Shaw, also from his father’s shooting academy.

The trial will be held in Trivandrum in January 26-February 1, 2020. A student of Class VIII in The Newtown School, his annual examination will start on February 20. “I suppose I will have to travel with text books,” he shrugs.

Adriyan picked up his father’s gun when he was seven, but kept practice to a minimum to avoid developing long-term back problems. A Walther rifle weighs 3-4kg.

“I don’t like studies much,” he admits candidly. “I like shooting because I am in competition with myself, not anyone else. It is peaceful,” he says.

“At 14, he has a good prospect to compete in the upcoming Youth Olympics in Dakar, Senegal, in 2022,” father and coach Karmakar says.