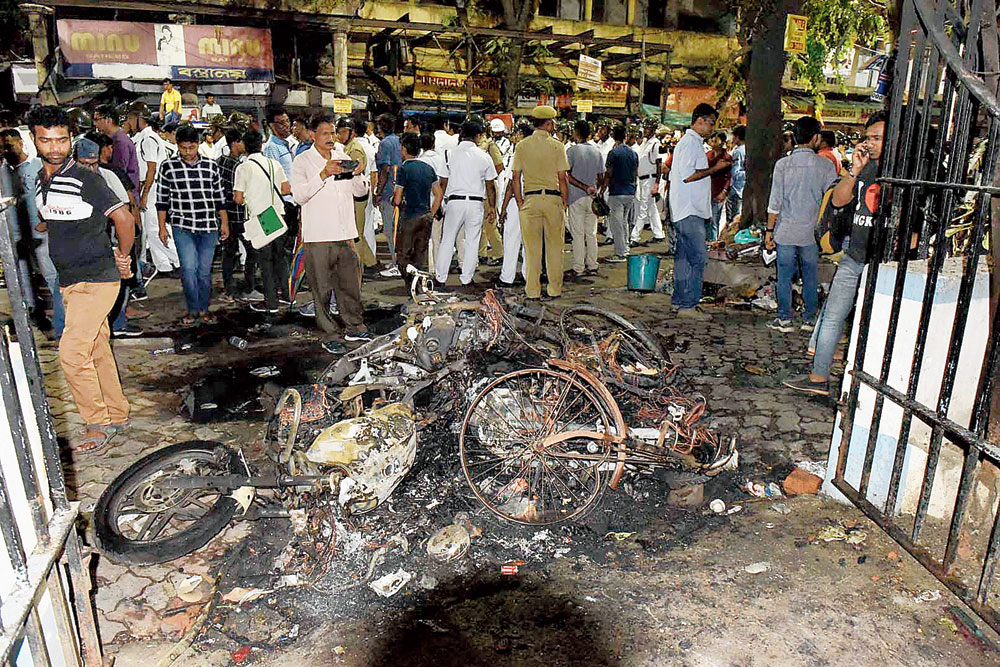 The charred remains of motorcycles in front of Vidyasagar College on Tuesday evening.
Picture by Bishwarup Dutta
Our Special Correspondent   |   Calcutta   |   Published 15.05.19, 08:52 PM

More than 50 people have been arrested for rioting and damaging public property during the flare-up on College Street and at Vidyasagar College that followed BJP national president Amit Shah’s road show on Tuesday.

All the 58 people arrested from the Amherst Street, Bidhan Sarani, Girish Park and College Street areas are supporters of the BJP, police said. All of them were allegedly involved in the violence that broke out on the campuses of Calcutta University and Vidyasagar College.

At least five of the men arrested by the Amherst Street police had, along with a few others, cordoned off Vidyasagar’s bust before it was vandalised, an officer said.

But it was not clear till Wednesday evening who among the 58 had damaged Vidyasagar’s bust, sources said.

Two separate cases have been lodged with Amherst Street and Jorasanko police stations under sections related to rioting and criminal conspiracy, and under the prevention of damage to public property act, police sources said.

The case registered with Amherst Street police station was based on a complaint letter submitted by a second-year student of Vidyasagar College alleging that the BJP goons who entered the college raising slogans “Amit Shah zindabad” and “BJP zindabad” were “provoked by Amit Shah (national President of Bharatiya Janta Party) who himself was present in the rally”.

A senior police officer at Lalbazar, however said, Shah’s name does not figure on the FIR.

Video footage of the violence collected by the police show some unidentified men — some of them wearing saffron shirts and some with pagdis — breaking open the main gate of Vidyasagar College with rods and lathis. Some of them could be seen barging into the college and smashing the Vidyasagar bust, officer said.

The footage was collected from various sources, including videos recorded on mobile phones, senior officers said.

“The pictures are very grainy. We are trying to identify the men. Some of them have been identified and arrested from the spot. The process of face recognition is on,” said a senior officer at Lalbazar on Wednesday.

One of the ways the police are trying to identity the troublemakers is by the colour of their clothes, officers said.

“The videos show a man in a blue shirt among the vandals. Another man in a black T-shirt is seen throwing a guardrail at cops outside the Calcutta University gate. It would be easier to identify them by what they were wearing,” the officer said.

At least 10 of the men were allegedly directly involved in Tuesday’s vandalism, officers said.

None of them could be produced before a magistrate in person on Wednesday because of a lawyers’ ceasework across Bengal.

Instead, their documents were submitted in Bankshal court and based on the police’s prayer, the court remanded 10 men in police custody and the rest in judicial custody for 14 days.

The police have submitted before the court that some unknown persons had used “abusive... language” against BJP supporters outside Vidyasagar College.

Bagga was allegedly part of a group that instigated violence when flexes and cut-outs of Prime Minister Narendra Modi and BJP national president Amit Shah were being removed from Lenin Sarani on the Election Commission’s orders, hours before Shah’s road show in central Calcutta. The windshield of a vehicle was smashed.

Bagga was later released as the charges against him could not be substantiated, sources said.

His name had earlier emerged in connection with the alleged assault on Supreme Court lawyer and activist Prashant Bhushan in Delhi.