Subodh, along with three other soldiers, and six civilians were killed when Pakistan indulged in heavy cross-border shelling along the line of control 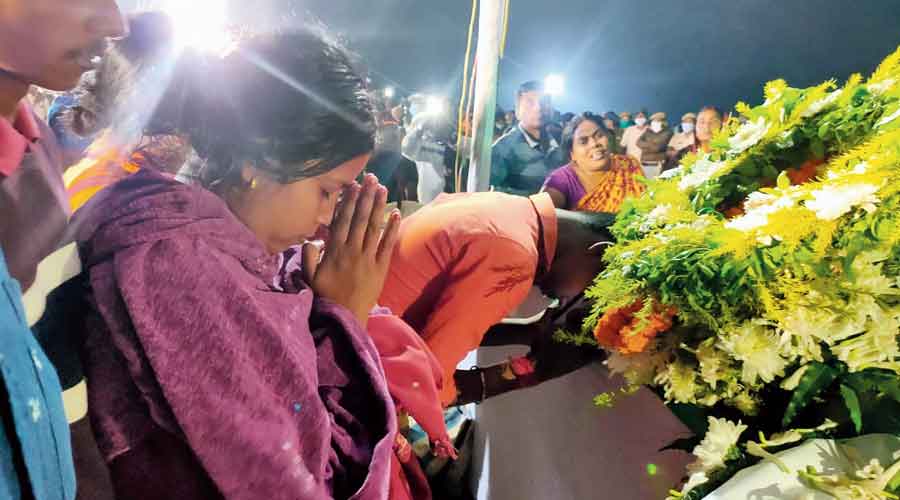 The last rites of soldier Subodh Ghosh, who had been killed in unprovoked firing by Pakistani forces in Jammu & Kashmir last week, were held in full state honour at the Plassey ghat on the bank of the Jalangi river in the early hours of Monday.

The mortal remains of the slain jawan had been brought home at Raghunathpur in Nadia’s Tehatta on Sunday night from Panagarh where the corpse had landed late in the evening.

Around 5,000 villagers gathered at a school ground near the jawan’s home to pay their last tributes to the son of the soil.

Local Trinamul MP Mohua Moitra, BJP MP Jagannath Sarkar, along with senior officials of the Nadia administration, laid wreaths on the soldier’s body. Later, the body was taken to the Plassey ghat, around 10km away, for the last rites.

Subodh joined the army in 2016. He got married in November last year and became father of a girl child in July, a few days after he had left home to resume duty after a vacation. Last Thursday, he called up his wife Anindita about his plan to visit home to arrange for a rice ceremony of their daughter.

But the following morning, Subodh, along with three other soldiers, and six civilians were killed when Pakistan indulged in heavy cross-border shelling along the line of control (LoC).

Subodh’s father Gouranga Ghosh said: “It is high time that India gave a fitting reply to Pakistan so that no father loses his son in such a way. We have seen Pulwama; every day precious lives of our soldiers are being sacrificed.” “Hope this ends soon,” Gouranga added as he broke down.