The passengers were sent to Rampurhat Medical College and Hospital, where doctors said that the condition of 5, including 2 children, was critical 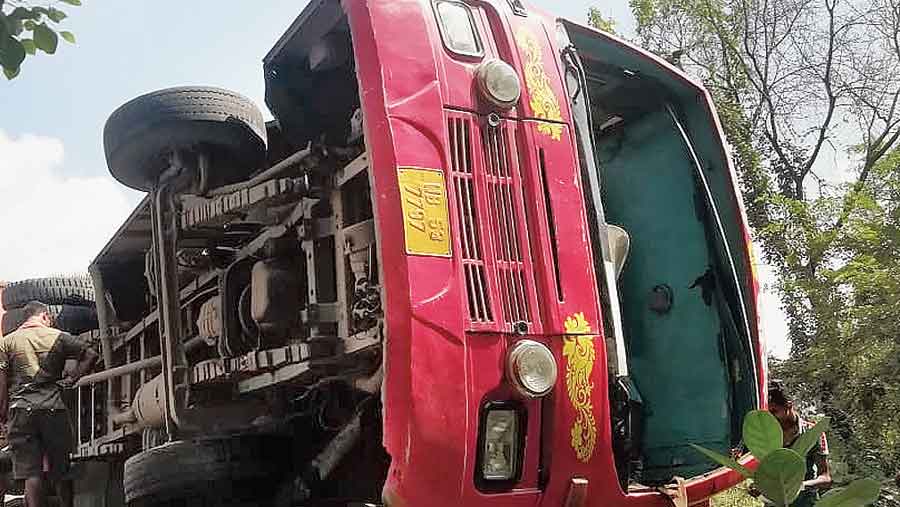 At least 30 passengers, including four children and six women, were injured when a private bus on the Rampurhat-Behrampore route hit a crater about 2 feet deep and flipped sideways on NH14 near Nakpur checkpost in Birbhum’s Nalhati on Saturday morning.

The axle of the bus gave way leaving the vehicle without a wheel.

As the vehicle flipped with a loud thud and passengers screamed for help, bystanders broke the windscreen of the vehicle to rescue passengers trapped inside.

The injured were sent to Rampurhat Medical College and Hospital, where doctors said that the condition of five passengers, including two children, was critical.

“The bus overturned as its axle broke after its wheel landed in a two-feet deep pothole. This happened because of the poor condition of the road. We have requested the National Highways Authority of India (NHAI) several times to repair the roads, but no action has been taken. We will write to them again and inform them of how so many passengers had a close shave on Saturday,” a police officer said.

Commuters said travelling on the 21km stretch from Nalhati to Moregram had become a nightmare as the road was studded with deep potholes. Over the past few days at least a dozen trucks and buses have broken down on the road which created huge traffic snarls on the single lane NH14, a commuter said.

“If one or two trucks break down on the 21km stretch, traffic gets blocked for hours. We need to deploy at least 10 cops daily to maintain traffic on national highways,” said a police officer.

“We know about the problem and have requested both the NHAI and state government to carry out repairs. We hope the stretch will be repaired soon. Big potholes will be filled up before Durga Puja,” said Moumita Godara Basu, Birbhum district magistrate.

NH authorities, however, said they had sent a proposal to the ministry of road transport and highways in Delhi requesting funds for repair.

The NHAI also blamed overloaded trucks for the damage to roads. An officer of the NHAI said that hundreds of overloaded stone and sand-laden trucks plied on the road leading to the formation of craters on the stretch.

“We have sent the proposal to the central government and are waiting for the nod and funds to reach us. As soon as we get the money, the road will be repaired. Only six kilometres of the 21km stretch are badly damaged,” said N.K. Singh, executive engineer of the PWD, who also looks after national highways in Birbhum.