To be set up at the cost of a little over Rs 580 crore, the campus will be spread over 17 acres and its construction is expected to take at least two years 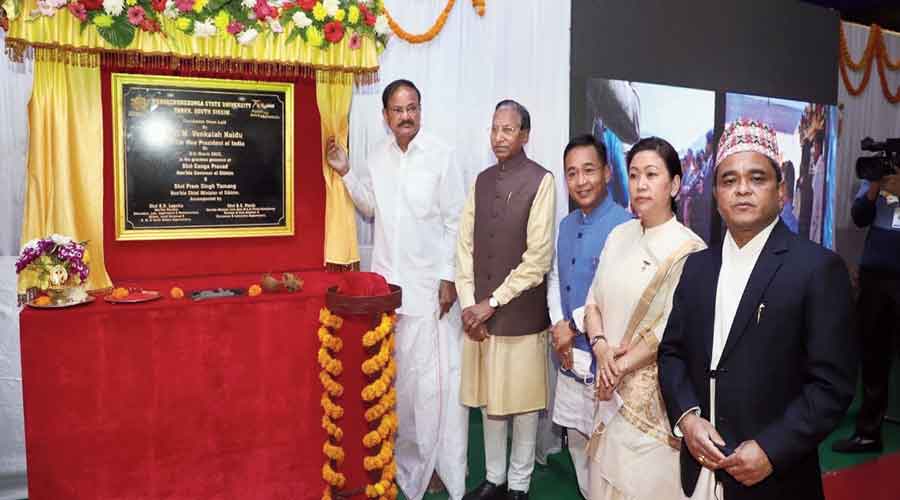 Naidu lays the foundation stone of the permanent campus of the Kanchenjungha State University on Friday.
Telegraph photo
Rajeev Ravidas   |   Siliguri   |   Published 12.03.22, 02:07 AM

To be set up at the cost of a little over Rs 580 crore, the campus will be spread over 17 acres and its construction is expected to take at least two years. The Assembly had on Monday sanctioned Rs 10 crore for this fiscal for the construction of the only state government-run varsity in Sikkim.

The Vice-President unveiled a plaque from Samman Bhavan to mark the start of the construction of the permanent campus. Speaking on the occasion, he said: “I am sure this institute will set new benchmark and become an exemplar in imparting quality education.”

Congratulating the Sikkim government for its mission of turning the state into an education hub of the Northeast, the Vice-President pointed out that institutions of higher learning played a crucial role in nation-building.

“I am happy to note that as per the latest all-India survey of higher education report, the gross enrolment ration (GER) of Sikkim state in higher education stands at 75.8 per cent, which is the highest in India, and I compliment the state and the government,” he said.

Kanchenjungha State University, formerly known as Sikkim State University, was set up by an Act of Assembly in 2003 by the previous Sikkim Democratic Front government, but started functioning only in 2018. It presently operates from Nar Bahadur Bhandari Degree College located at Tadong in Gangtok with 82 students in two departments of Nepali and Sanskrit.

Sikkim chief minister P.S. Tamang (Golay) said education and health were top priorities of his government and listed various programmes initiated in the two sectors in the past three years. “The establishment of the university will further strengthen the position of Sikkim as an education hub of the eastern Himalayas,” he said.

Golay pointed out that despite being established in 2018, the varsity lacked proper infrastructure. “Despite the financial limitations arising due to the Covid-19 pandemic, we were able to provide space for the construction of a modern campus with required facilities,” he said.

Residents of Tarku, which is located about 40km from Gangtok, watched the foundation-laying ceremony from the campus site on a big screen. They said the setting up of the university in their rural belt would not only benefit local students but also bring economic advantages.