On Friday morning, the rainfall led to landslides in Bhutan, which in turn damaged a stretch of Asian Highway 48 that enters the country via Pasakha from Alipurduar 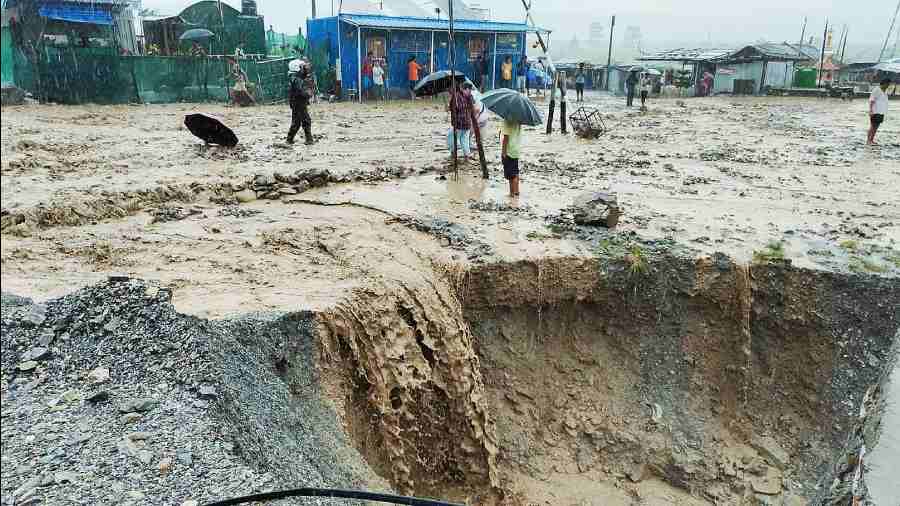 Incessant rain in the sub-Himalayan districts of Bengal and the neighbouring state of Sikkim over the past few days snapped road connectivity at a number of locations and led to the inundation of new areas.

The disruption in traffic left around 300 tourists stranded at two prominent destinations in north Sikkim for over two days. The administration of Mangan district in the Himalayan state has initiated efforts to repair the damaged stretches of the road to restore the  traffic.

On Friday morning, the rainfall led to landslides in Bhutan, which in turn damaged a stretch of Asian Highway 48 that enters the country via Pasakha from Alipurduar district of Bengal. As a result, movement of trucks ferrying goods from India to Bhutan stopped.

Sources said the landslides which had occurred in Bhutan brought down water and debris to the check post area in Pasakha — which is on the Indo-Bhutan border — and then flooded Khoklabusty and Bangebusty, which are in Kalchini block of Alipurduar district.

A number of shops located near the checkpost were damaged. Local people worked hard to save their belongings from getting buried under the debris.

“It was like a flash flood. The water and the debris have damaged our shops and houses. We have no idea what to do now,” said Dhanraj Tamang, an affected resident.

With the highway being damaged, around 100 trucks are stranded on the border, said locals.

Ganga Prasad Sharma, the chairman of the Jaigaon Development Authority and engineers of the state irrigation department, visited the site.

“Machines and works have been engaged on both sides to clear the debris and make the stretch of the highway fit for traffic. The water is still coming down and we are trying to divert it towards adjoining forests,” said Sharma.

In the neighbouring Cooch Behar district, the swollen Raidak diver has spilled over its banks and submerged three wards in Tufanganj town and some adjoining villages.

Residents of the marooned areas have shifted to the flood relief shelters. “We are keeping a watch over the situation. The disaster management teams and relief materials have been kept ready to extend help to people if more areas get flooded,” said an official of the subdivisional administration.

In Sikkim, as landslides occurred on a number of stretches along the principal highway that connects Mangan district in north and at the popular tourist destinations of Lachen and Lachung, traffic halted in the past two days.

Around 60 to 70 vehicles carrying around 300 tourists were stuck at the two destinations.

“We have engaged workers and equipment at the landslide sites so that traffic can resume. Based on the spot assessments, we felt it would take another seven to eight hours for traffic resumption. It has started raining again and we are keeping our fingers crossed,” said a source in the administration.

The rainfall, weather experts said, will continue for a couple of days in the region. “The monsoon is vigorous over the region and there is a forecast of rainfall ranging from 70mm to 200mm in some of the locations,” they said.

A man who was stranded in the swollen Teesta river in Gangtok district of Sikkim on Thursday was rescued after five hours.

Sources said Kushal Rai, a resident of Darjeeling, who works in the mess of a pharmaceutical company at Manglay in Singtam, had gone to the Teesta to collect woods from the riverside around 3pm on Thursday.

Some local people spotted him and informed police. Police teams from Singtam and Temi police stations, with the help of the Indian Reserve Battalion personnel of Sikkim police and workers of the National Hydroelectric Power Corporation (NHPC), managed to rescue him with the help of an excavator around 8pm.

The excavator negotiated the river and reached near the rock where Rai took shelter. He clambered onto the front of the machine that finally took him ashore.