SiCA president Lobzang G. Tenzing said Saturday’s twin wins demonstrated that the standard of cricket in the state was growing by leaps and bounds 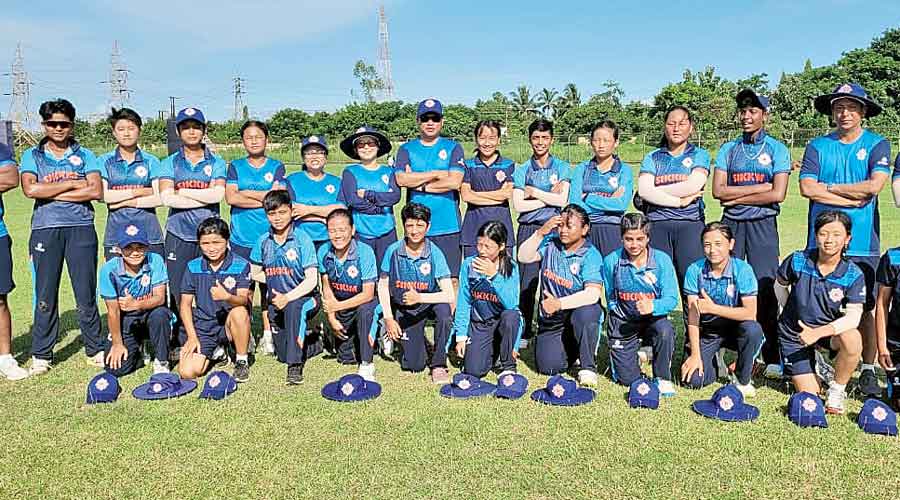 Sikkim, the toddlers of Indian cricket, have made a rousing start to the 2021-2022 cricketing season with both the teams of their girls and boys faring well with three and one wins, respectively, in the initial stages of the ongoing national under-19 tournaments.

While the Sikkimese girls have galloped their way to the top of the table with an all-win record and 12 points to their kitty, the colts have trotted to second place with a win, a draw and a loss. Both the teams play in the plate division, which is the lowest rung in the tournaments.

In their third outing in the Women’s Under-19 One-Day Trophy played at Bhubaneswar in Odisha on Saturday, Sikkim thrashed Meghalaya by 95 runs. Batting first, Sikkim scored 135 runs at the loss of seven wickets in their allotted overs, and then bundled out Meghalaya for a paltry 40 runs.

While Samayita Roy Prodhan did a star turn with the bat by scoring 55 runs, Leezamit Lepcha Chettri stole the show with the ball by taking four wickets.

In the Vinoo Mankad Trophy played on the same day at Ranchi in Jharkhand, the Sikkim boys beat Arunachal Pradesh by 41 runs to register their first outright win.

Despite scoring a meagre 90 runs with the bat, their bowlers led by captain Tarun Sharma, who bagged a five-for, defended the total by bowling out their rivals for just 49 runs.

Unlike in the senior-level tournaments like the Ranji Trophy where teams in the plate division are allowed to field three outstation players, there is no such provision in the junior grade tournaments.

“All our players are locals, which makes the wins even more significant. Our kids are progressing very well under the guidance

of our director of cricket operation and coaching Atul Gaekwad,” said Roshan Gupta, a spokesman for the Sikkim Cricket Association (SiCA).

Gaekwad is a former faculty member of National Cricket Academy and Board of Control for Cricket in India (BCCI)-recognised high performance coach.

SiCA president Lobzang G. Tenzing said Saturday’s twin wins demonstrated that the standard of cricket in Sikkim was growing by leaps and bounds.

“The SiCA family congratulates the champion players and the support staff for their extraordinary performances,” he said.

Cricket is a fledgling sport in the football-crazy Himalayan state with SiCA being granted full membership of the BCCI only in 2018.