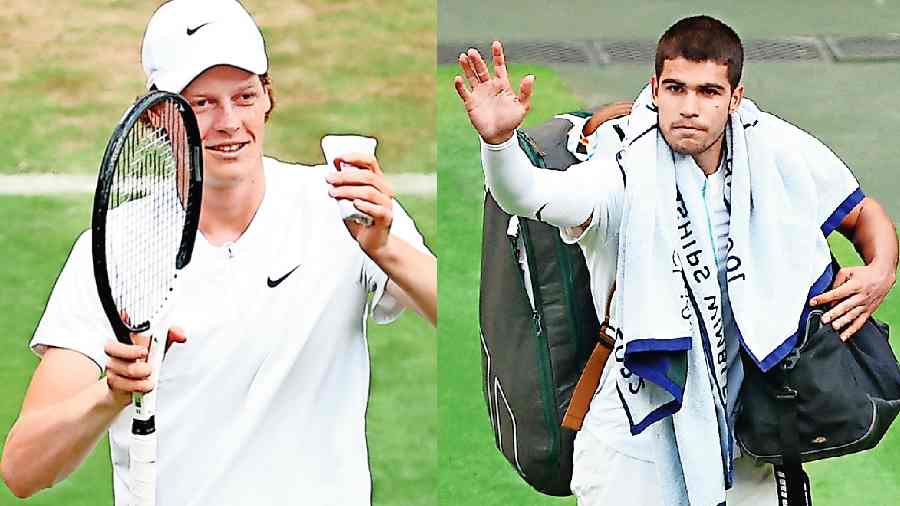 Two luminous young talents, Jannik Sinner of Italy and Carlos Alcaraz of Spain, took to the most famous showplace in tennis just a couple of hours after the parade of champions that commemorated the 100th anniversary of Wimbledon’s Centre Court on Sunday and showed that men’s tennis will be in good hands when the ‘Big Three’ finally step aside.

The young guns hoped their thrilling fourth-round clash at Wimbledon marks the start of a Grand Slam rivalry.

Italian 20-year-old Sinner reached the quarter-finals at Wimbledon for the first time with a 6-1 6-4 6-7(8) 6-3 win over 19-year-old Alcaraz as the two youngest players left in the men’s draw gave Centre Court a glimpse of the future.

At one point, Sinner slipped and fell hard on his chest while chasing down an Alcaraz drop shot, and Alcaraz came hustling forward to offer him an encouraging fist bump after he rose to his big feet.

Are they the future of men’s tennis? It certainly looks that way, and they have been the present of the game at times, upsetting their elders, winning tour titles and reaching the quarterfinals at Grand Slam tournaments.

Asked if the two friends could share a rivalry akin to greats Roger Federer and Rafael Nadal, Sinner said: “Hopefully, this is going to be the case ... I think what we showed today, it’s a great level of tennis, great attitude from both of us.

“I think it’s just great for tennis to have some new names, new players,” added the world number 13, who will face reigning champion Novak Djokovic, the other member of the ‘Big Three’, for a place in the semi-finals.

In Sinner’s game there is a reflection of Federer. Sinner hits his forehands with a consistent mix of heavy speed and daring curve. He adds aces, drop shots and deep returns. The energy is reminiscent of that surrounding Federer at the start of his great Wimbledon career. It is a reminder of the way one generation gives way to the next.

Sinner said he hoped future meetings with Alcaraz would be in Grand Slam finals.

“Unfortunately we had to play in the last 16 already ... Today, I went out on top. Maybe next time it will be different.”

Written with inputs from Reuters and NYTNS