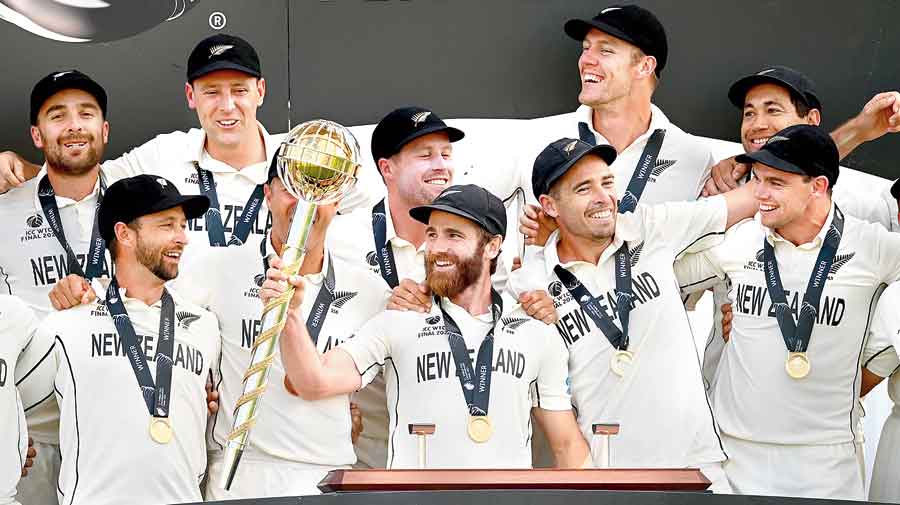 However hard Virat Kohli would try to make us believe that the outcome of the World Test Championship final will have no bearing on India’s performance over the last four/five years, their insipid batting on the sixth day in Southampton will continue to haunt them.

The batting collapsed for the second time in the Test as New Zealand galloped to the World Test Championship title in its inaugural edition. The Black Caps’ eight-wicket victory will taste sweeter after having lost out on the ODI World Cup at Lord’s two years back on the controversial boundary count back rule.

India’s “quest for excellence” in the second innings at the Ageas Bowl lasted just 73 overs and produced 170 runs in conditions that were considered best for batting in this Test.

After two washed out days that forced the match into the reserve day, they needed to show patience and application to keep their chances alive. What was on offer was a shambolic display against high-class swing and seam bowling.

If the Black Caps showed positive intent, Kohli’s men lacked the technical and mental set-up needed to survive in these conditions. During a disastrous session-and-a-half on Wednesday none of the batsmen looked capable of playing a long innings. Be it Kohli, Ajinkya Rahane or Rishabh Pant, all fell by the wayside when all they needed was to grind out most of the final day.

New Zealand still needed to get 139 in a minimum of 53 overs to lay hands on their first ICC trophy in more than two decades. Ross Taylor whipped Mohammed Shami off his pads to the boundary to seal it off amid wild celebrations in their dressing room.

Ravichandran Ashwin dismissed the openers quickly but there was no further luck for the Indians.

Cheteshwar Pujara and Jasprit Bumrah will have to blame themselves for the dropped chances.

Some incisive bowling by the Indians couldn’t dislodge Kane Williamson and Taylor during their unbroken 96-run partnership. While the Indians floundered, the quiet determination in New Zealand’s ranks stood out.

The conditions suited New Zealand right through as also the experience of having played two Test matches against England earlier this month. In contrast, India, having gone through 10 days of quarantine on arrival, could only be satisfied with some intra-squad warm-ups in the lead-up to the final. The lack of preparation showed.

New Zealand offered very little leeway to the batsmen with sustained hostility and potent bowling. Tim Southee’s (4/48) in-swingers were tough to counter, Kyle Jamieson’s fuller length aided lateral movement, Neil Wagner continued to test and challenge with his short-pitched stuff and Trent Boult (3/39) used the angle to find the nicks behind the wicket.

Jamieson (2/30) started the slide in the morning by sending back Kohli. The dismissal was set up nicely with the 6 foot 8 inch pacer darting the ball back into Kohli repeatedly with some intelligent use of the bowling crease. Then as he got one to straighten, Kohli fished outside the off stump to nick behind.

The fast bowler was into the act again in the next over, reaping the rewards for his nagging line outside off. Pujara couldn’t keep his bat away as it held its line again.

It could have been worse had Southee not dropped Pant. The run-rate in this Test reflected a bygone era but the young wicketkeeper-batsman seemed to be in a different zone.

Surely the men who matter must have missed a heart beat or two in the dressing room seeing his reckless approach. There was no mending ways and a few close calls didn’t prompt him to change his style.

The Pant-Jadeja partnership raised hopes of a turnaround as runs came at a relatively faster pace. But Wagner got Jadeja to nick a length ball from round the wicket.

Pant carried India’s hopes but he finally ran out of luck when he miscued one too many.